Accessibility links
Tab Benoit: One Foot in the Bayou In a session from KPLU, blues guitarist Tab Benoit plays through a couple songs all by his lonesome, yet manages to conjure an entire band all his own. Benoit also talks about creating "Voice of the Wetlands," a group that raises awareness about the importance of Louisiana's natural resources.

Tab Benoit: One Foot in the Bayou

Tab Benoit: One Foot in the Bayou 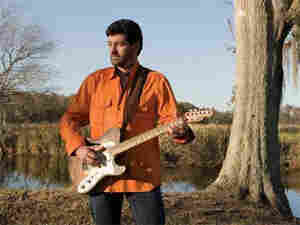 One of the real measures of a guitarist is how he sounds without his band — just one guy and one guitar. I've always liked Tab Benoit's blues playing, but after hearing him work through a couple of tunes by himself on a borrowed Telecaster, my opinion of him went way up.

In the solo setting, you can really hear his guitar technique: both brash and subtle, cool yet a bit out of control, deliberate and funky. On his own, Benoit plays the whole band on his guitar, picking, strumming, banging... and he does it effortlessly, in a style that's as comfortable on an arena stage as it is on a back porch.

In this interview, Benoit plays a couple of tunes from his 2007 album, Power of the Ponchartrain. First is the easy, loping blues shuffle of "One Foot in the Bayou," followed by the Cajun-flavored "Sac-au-Lait Fishing." Sac-au-Lait — "bag of milk" in French — is a local name for the White Perch, the official freshwater fish of Louisiana.

Benoit also talks about how he became a reluctant political activist three years before Hurricanes Katrina and Rita, and how those two disasters compelled him to help create Voice of the Wetlands in response to FEMA policies on the Gulf Coast.

Altogether a fascinating and talented guy at the top of his game.