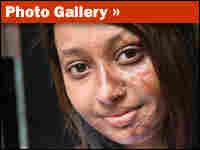 Severe burns or fires kill or injure nearly 4 million women each year, according to figures from the World Health Organization, and nearly half of the reported cases occur in Southeast Asia.

Dr. Chandini Perera, one of only six plastic surgeons in Sri Lanka, performs reconstructive surgery to burn victims. She says most of the victims are poor and their living conditions make them vulnerable to the danger of fire.

But there's a disturbing dynamic in some cases: Women are set on fire by their husbands and boyfriends, and others set themselves on fire in an empty bid to escape abuse.

Those who survive the burns do so with disfigurement and disabilities requiring long recovery periods. That process tends to be more emotional than physical, Perera says, noting that victims are often ostracized. That, in turn, keeps the problems hidden.

"If you are stigmatized and you are an outcast, then you live in this unseen world," Perera says.