Accessibility links
Queen's Brian May Rocks an Astrophysics Rhapsody As a member of the glam rock band Queen, May wrote "We Will Rock You" and played that guitar solo on "We Are the Champions." But the curly haired musician also dreamed of a career in astrophysics. Three decades later, he's gotten his doctorate and written a book about the history of the universe. 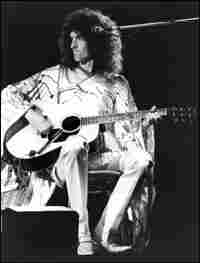 May performs for more than 50,000 people in London's Hyde Park in 1976. His rock success cut short his studies in astrophysics around this time. Keystone Features/Getty Images hide caption

Brian May, of the legendary British glam rock band Queen, is obsessed with stars. Not the kind that accompany his band on the Hollywood Walk of Fame — but the much larger, more naturally beautiful kind.

Best known as Queen's lead guitar player, May wrote "We Will Rock You," sang the bass parts on "Bohemian Rhapsody" and played that guitar solo on "We Are the Champions" — all hits people are still dancing to today. That success begins to seem very small, however, when you contextualize it in the history of the universe — something May is prone to do lately.

Just as his band was starting to make some noise 35 years ago, May was studying astrophysics. Though he put off his studies to live the life of a rock god, he maintained his interest in the mysteries of the universe. Just last year, he completed a dissertation on interplanetary dust, earning a doctorate from Imperial College in London.

Since then, he's co-authored a book with a title that could pass for a Queen song: Bang! The Complete History of the Universe.

On a recent afternoon, Madeleine Brand joined May at the Griffith Observatory, high above Hollywood, for a ceremony in his honor. In a long black coat, white sneakers and an electric Hawaiian shirt, his hair a kinky black mass, he managed to perfectly embody both rock 'n' roller and mad scientist — not the most natural of bedfellows.

"I think music is about our internal life. It's part of the way people touch each other," he says. "That's very precious to me. And astronomy is, in a sense, the very opposite thing. Instead of looking inwards, you are looking out, to things beyond our grasp."

May enjoys dividing his time between the observatory and the recording studio these days, he says. But regardless of whether he's inspecting stars or working on his new album, he likes being called "Dr. May."

An Introduction to the 'History of the Universe' 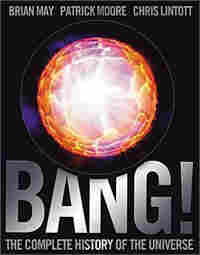 An excerpt from Bang! The Complete History of the Universe by Brian May, Patrick Moore and Chris Lintott.

Everything – space, time, matter – came into existence with a 'Big Bang', around 13.7 billion years ago. The Universe then was a strange place – as alien as it could possibly be. There were no planets, stars or galaxies; there was only a melée of elementary particles; these filled the Universe. Moreover, the entire Universe was smaller than a pin-prick, and it was unbelievably hot. At once it began to expand – and as it spread out and cooled from this bizarre, unexpected start, it evolved into the Universe we see today.

Modern science is unable to describe or explain anything that happened in the first 10 to the negative 43 seconds after the Big Bang. This interval, 10 to the negative 43 seconds, is known as the Planck time, named after the German scientist Max Karl Ernst Planck. He was the first to introduce the concept of energy not as a continuous flow, but in packets, or 'quanta', each with a specific energy. Quantum theory is now at the base of much of modern physics; it deals with the Universe on the smallest scales and is certainly one of the two great achievements of twentieth century theoretical science. The other is Einstein's general theory of relativity, which deals with the physics of very large scales – astronomical scales, in fact.

Despite the fact that, in their own realms, both theories are extremely well tested by experiments and observations, there are major problems in reconciling these theories with each other. In particular, they treat time in fundamentally different ways.

Einstein's theories treat time as a coordinate; it is therefore continuous, and we move smoothly from one moment to the next. In quantum theory, however, the Planck time represents a fundamental limit – the smallest unit of time that can be said to have any meaning at all, and the smallest unit that could ever, even in theory, be measured. Even if we built the most accurate clock possible, we would see it jump rather erratically from one Planck time to the next.

Attempting to reconcile these two contrasting views of time is one of the major challenges for 21st century physics ('string theory' and its cousin 'membrane theory' are currently closing in on this goal, but there is much work still to be done). For now, in the small, hot, dense Universe that existed just after the Big Bang, quantum physics holds sway, and hence we begin our scientific study of the Universe 10-43 seconds after the beginning.

The Big Bang is a counterintuitive idea. Our common sense seems much more impressed by a static and infinite Universe, and yet there are good scientific reasons to believe in this singular event. If we accept the Big Bang, it is possible to trace the whole sequence of events from that first Planck time right up until the present day, where we find ourselves on what Carl Sagan memorably described as our 'pale blue dot'.

The beginning of time

So let us look back to the very start of the Universe – just after the Big Bang itself. It is tempting to picture the Universe suddenly bursting out in a vast ocean of space, but this is completely misleading. The true picture of the Big Bang is one in which space, matter and, crucially, time were born. Space did not appear out of 'nothingness'; before the moment of creation there was no 'nothingness'. Time itself had not yet begun, and so it does not even make sense to speak of a time before the Big Bang. Not even a Shakespeare or an Einstein could explain this in plain English, though the combination of the two might be useful!

It also follows that when we survey the Universe today, it is meaningless to ask just 'where' the Big Bang happened. Space only came into existence with the Big Bang itself. Hence, in those first few fractions of a second, the entire Universe we see today was in a tiny region, smaller than an atomic nucleus. The Big Bang happened 'everywhere', and there was no central point.

A nice illustration of this is given in a famous painting by Escher, known somewhat unromantically as 'Cubic Space Division'. Imagine standing on any of the cubes which mark junctions on this lattice, while each and every one of the rods joining the cubes expands. From your perspective, it would seem that everything is rushing away from you, and it might seem natural at first to conclude that you are in a special location – the centre of the expansion. Yet standing back and thinking allows you to realize that the expansion would look the same wherever in the lattice you were; there is no centre. The situation is very similar in our Universe; each group of galaxies appears to be rushing away from us, and yet an observer looking back at us from these distant stars would see the same illusion and would presumably be just as likely to conclude that he is at the centre of the expansion.

Another problem concerns the often-asked, and at first glance sensible question 'how big is the Universe?' Here we again have a major problem – there seem to be two possible answers. Either the Universe is of finite size, or else it isn't. If finite, what lies outside it? The question is meaningless – space itself exists only within the Universe, and therefore there is literally no 'outside'.

On the other hand, to say the Universe is infinite is really to say that its size is not definable. We cannot explain infinity in everyday language, and neither could Einstein (we know, because Patrick asked him!).

Remember, too, that we need to consider time as a coordinate; in other words, we can not simply ask 'how big is the Universe?' as the answer will change over time. We could ask 'how big is the Universe now?', but as we shall see later, a consequence of relativity is that is impossible to define a single moment called 'now' which has the same meaning across the entire Universe.

Talking about a Universe which has a particular size immediately leads to thoughts of an edge. If we traveled far enough, would we hit a brick wall? The answer is 'no' - the Universe is what mathematicians call finite but unbounded. A useful analogy is that of an ant crawling on a ball. By traveling always in the same direction it will never come up against a barrier, and it can cover an infinite distance. This is despite the finite size of the ball, to which the ant will be completely oblivious. Similarly, if we were to set off in a powerful spacecraft in what we perceive to be a straight line, we would never reach the edge of the Universe – but this does not mean that the Universe is infinite; we shall see later that space, too, may be regarded as curved.

Therefore the edge of the observable Universe, from where light could only just reaching us, must be 13.7 billion light-years away, and expanding at a rate of one light-year per year. In fact there are reasons why we will never be able to see quite this far, as will become clear later. All we can say for certain about the size of the Universe is that it must be larger than the portion we can see.