Accessibility links
Excerpt: 'The Other' This 1971 debut novel by actor-turned-writer Thomas Tryon is a portrait of psychological decay and transference between identical twin boys born, incongruously, on different days (one before, the other just after midnight) and with different Zodiac signs. 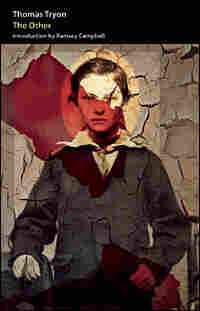 "Stop!" Niles cried, and the music stopped, stopped precisely and immediately, that twanging sound that rang in his ears and made him nervous. "Listen! Somebody's up there. Do you hear? Listen!"

"Holland — listen! " he insisted, his voice ecstatic with horror. He had hastily put out the candle, flatting his hand against the flame, knocking over the bottle the candle was stuck in; its empty clatter still echoed up and down the room.

There was Somebody walking around up there, you bet. Somebody trying very hard not to be heard, Somebody being a sneak, Somebody out for trouble. Almost soundless they were, the footsteps, so soundless you had to make a face to hear them, but there they were all the same. Somebody crafty up there, crafty enough to be barefooted, or to be wearing sneakers.

"You're nuts. Jeeze. It's nobody." Niles was unable to see him, but Holland's voice had that familiar, well-honed edge of ridicule. Unconsciously Niles rubbed the palm of his hand, greased by hot wax.

"Somebody's up there," he rigidly insisted. "Somebody--" Somebody human, he had meant to say; at least he imagined it human.

"Crazy as a bedbug."

"No sir!" Niles retorted, grimacing with suspense, eyes roving the floorboards above. There they went again, surreptitious, creepy, sneak-up-on-you steps. He waited for the grating protest of iron hinges he knew must follow.

The footsteps neither progressed nor receded, they merely stopped. There followed a faint double thud on the trapdoor and he could picture Somebody kneeling on the floor overhead,

He held his breath. Now Somebody moved away, went tippytoeing back across the trapdoor; a board creaked; Somebody must have gone outside. Phew. Niles inhaled the terror like exotic incense, his thin frame rippling with fright.

Cripes, there he went with his harmonica again, that idiot Mother Goose rhyme. Niles had heard it so often he knew the words by heart.

How many miles to Babylon? Threescore miles and ten--

Can I get there by candlelight? Yes, and back again.

A mocking, lilting refrain, perfect for blowing on a harmonica. On it went, the tripping refrain:

If your heels are nimble and light, You may get there by candlelight...nyang-dang-ga-dang --

Next, Holland's hateful crooning: "Ni-yuls — Ni-yuls Alexan-der Per-ry." Cripes. The Alexander was by way of Alexandra, his mother, and had, Niles felt, sort of a sissy sound.

At last, defeated: "What?" he answered Holland.

"What?" They were sitting there in the dark; some light, you fool! Niles groped for the bottle, righted it. He fingered a kitchen match from the Prince Albert tin hidden in his shirt and swiped it against a damp stone in the floor. Its phosphorus head crumbled away to nothing.

"I can do it with two." Fumbling out a pair, Niles scraped the heads together. They sprang to life with a fizz. He dropped one and nursed the other to the candle stub. The scarf of flame burned uncertainly at first, dimly bluish, then gradually turning orange as the oxygen reached and fed it. Increasing in brilliance, it shone through the flesh of his hand translucently, gilding the edges of his fingers and dyeing his palm a deep vermilion. Briefly his figure cast a wavering shadow across the dirt floor, gigantic as it climbed the mottled wall, the whitewash there flaking away in leprous patches. Beneath his knees the stones felt agreeably cool; in his nostrils the acrid odor of phosphorus mingled with the smell of dust and mold and withered coppery fruit scattered about.

"There," he said, pleased with the candle effect as he hunkered back Indian fashion and rubbed his knees. Towering ominously in a corner was a pale segmented beast: an irregular stack of empty bushel baskets climbed the wall like a huge caterpillar. Overhead, an arm's span apart, solid hand-hewn beams ran the length of the low ceiling, supported by thick Y-shaped joists, adze-marks on their surfaces eagerly catching and tossing back beads of amber light. Between the two center beams a narrow wooden stair-ladder rose at a sharp incline to a trapdoor let into the rough planking of the threshing floor twelve or so feet above. On the lower floor level was a smaller door of whitewashed wood, called the Slave Door, which gave entrance from a passage between the wagon room across the way and the apple cellar itself.

Frowning slightly, Niles carefully removed from a pocket a chameleon on a fine silver chain. He dropped it inside his shirt with the tobacco tin, then scrambled across to an upended crate partially hidden by the baskets. A divider in it held a pile of dog-eared magazines. He dug one out, then returned to the pool of light, holding it up to the flame. On the cover a man was struggling against a pack of vicious wolves, their fangs dripping gore onto the snow as they attacked a dogteam hopelessly entangled in the harness of a sled.

"'Doc Savage and the Winter Kingdom of the Akaluks,'" Niles read aloud. He peered expectantly beyond the candlelight into the dark. "Holland?"

"Sure. Like Doc Savage and the Winter Kingdom. Remember the frozen tundra? Well, with snow we could have our own Winter Kingdom down here."

"How?" He sounded mildly curious.

"Sure — bulrushes. It's a good idea, no kidding. If we went down to the river and got cattails, we could shred 'em up and have snow all summer. A Winter Kingdom — huh?" He watched Holland's face while he gave it thought; somehow he was always the one to make the decisions. Certainly Niles was pleased to be with him, pleased with his company, pleased they were not only brothers but friends as well. Only, truthfully, they weren't — not really. Not that Niles didn't desire it — they just weren't close. Niles found Holland strange, unpliant, distant. Often secretive, brooding. Of a dark nature. Holland

was his own person, a loner, and who was there could do anything about that?

Watching, Niles saw Holland's solemn wink. The Winter Kingdom was pronounced as having possibilities. He felt elated; clever, Holland had called him. In the flickering candlelight he considered how little their contemplation of each other across the dimly lighted space did to bring them closer together, though he passionately wished it. Holland was wearing his favorite pink shirt and khaki shorts rolled at the thighs. His eyes shone remote and glassy like a cat's in the night. Gray like all the Perrys', sober and deep-set under a shock of sun-whitened hair, they were oddly tilted at the corners beneath dark slanting brows, giving occasional random expressions a curiously Oriental cast; sometimes it seemed he must have come riding with Genghis Khan across the steppes from Tartary.

Niles returned the magazine to the crate and resumed his place. Absently he considered the fingers of one hand, which, as though directed by a life of their own, crept to the front of his shirt. He scratched where the lizard's feet had tickled his stomach, and lightly whistled through his teeth. He felt inside his shirt for the tobacco tin, withdrew it, and spilled several objects into the circle of light: among the matches a carved horse chestnut, a fascinating-looking blue tissue paper packet — that which contained The Thing — and a gold ring.

He spit on his finger and with difficulty slid the ring on and held it out admiringly. It was a pippin, as Father would have called it. How brightly it gleamed in the light, how heavily it weighed on his hand! A jewel, worthy of a Midas. Its broad face bore an intaglio crest: a savage-billed falcon. Niles turned the ring, examining microscopically the tiny silver seam in the gold band where it had been cut down to fit a smaller finger. "Everybody thinks it's just a plain hawk, but it's not, it's a peregrine." He absently fingered the blue tissue-wrapped packet. "Peregrine for Perry. It is my ring, isn't it?" As though seeking reassurance.

Excerpted from The Other by Thomas Tryon. Copyright (c) 2008 by The Estate of Thomas Tryon. Reprinted with permission from Millipede Press. All rights reserved.