Accessibility links
L.A. Drivers Ditch Cars for Subway Southern California commuters are being hit hard by some of the highest gasoline prices in the nation. And, like commuters elsewhere in the country, many of them are turning to mass transit for relief.

Southern California commuters are being hit hard by some of the highest gasoline prices in the nation. And, like commuters elsewhere in the country, many of them are turning to mass transit for relief. 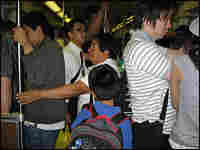 The increase in gasoline prices is having a direct impact on Los Angeles Metro ridership. Amy Walters for NPR hide caption

MANDALIT DEL BARCO: This is Mandalit del Barco in Los Angeles, where gasoline prices are among the highest in the country, topping $4 a gallon. That's led many people to ditch their cars for the subway. Yes, L.A. does have one.

Mr. DAVE SOTERO (Spokesman, MTA, Los Angeles): Angelinos hate to get out of their cars, but they're doing so in greater numbers, and they're using our rail system.

DEL BARCO: But in the city dominated by cars and freeways, some commuters need a little help figuring out mass transit.

Ms. SANDY ANDERS: Oh, I did get on the wrong direction.

DEL BARCO: At the North Hollywood subway stop, Sandy Anders was trying to get her bearings. It was her first time writing Metro.

DEL BARCO: Instead of driving to L.A., she took a commuter train into the city. Getting to her final destination would also require rides on the subway and a shuttle bus. But Anders says the complicated commute was better and cheaper than filling her gas tank.

Ms. ANDERS: I drive a F150 truck, and there was no way I'm going to come meet my friend at, you know, Universal Studios at the price of the gas. I probably would have spent $55 or $60 in gas to come here in the truck.

DEL BARCO: Mike Eugene used to crank up the stereo system in his new Nissan Maxima.

DEL BARCO: Now he listens to music on his cell phone when he rides the metro to work as an electrician, to get groceries or just to visit friends

Mr. MIKE EUGENE: You know, Red Line, Blue Line, Gold Line, Metro Link, I'd rather take that than pay all them high gas prices. I remember when three bucks could damn near fill up your tank. You see, people that you would normally see riding it, riding it, you know? They got their luxury cars or whatever, but they're still going to ride that Metro to save their gas money. I don't care how the rest of the people be acting like they are.