Accessibility links
Circus Family Is Ready for a Safety Net After spending 10 years traveling the world in a 1962 double-decker bus that maxes out at 33 mph, the Sprockets Circus family is ready for the next attraction: a home. The trip taught its members some valuable lessons about their fellow man.

Listen
Circus Family Is Ready for a Safety Net 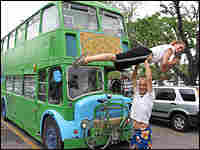 Scott Harrison and Issabelle Feraud pose in front of their 1962 Bristol double-decker bus. It's taken them on a world tour, albeit very slowly: The bus has a top speed of 33 mph. John Burnett, NPR hide caption 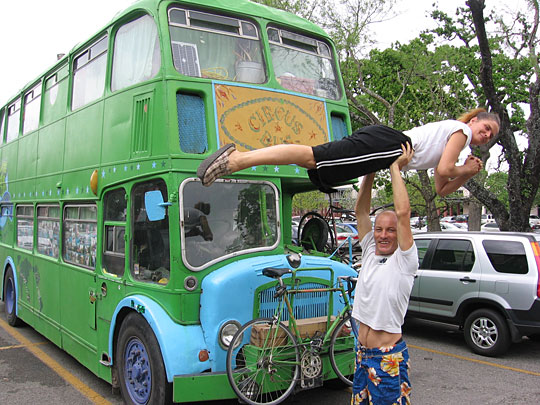 Scott Harrison and Issabelle Feraud pose in front of their 1962 Bristol double-decker bus. It's taken them on a world tour, albeit very slowly: The bus has a top speed of 33 mph.

Sometime this month, a lime green, 1962 Bristol double-decker bus with the words "circus bus" printed on the front will make its way from Charleston, S.C., to Baltimore. It will be moving very, very slowly and will be carrying a man, a woman and a boy.

The four of them — the family and the bus — make up the Sprockets Circus, and they're wending their way up the Eastern Seaboard after a 10-year world tour before heading back to Europe. They say their decade on the road has shown them quite a bit about humanity.

Issabelle Feraud, Scott Harrison and their 11-year-old son, Theo, have been in the bus and on the road nonstop since 1997, performing for audiences — including street kids in Calcutta and the Sultan of Brunei — in 33 countries from Turkey to Thailand to Guatemala. They ship their bus between continents on container ships, which, at $5,000 per trip, keeps them a subsistence circus.

Their shows are full of magic, juggling, acrobatics, daredevil unicycling and lots of slapstick humor.

Feraud, who is French, met Harrison, who is British, 16 years ago and formed Sprockets. They've been circus performers full time ever since. Theo came along later five years later. The circus bus is the fourth member of their troupe. Its top speed is 33 mph.

"It was designed as a city bus," Harrison explains as he starts the engine. "It was designed to pick people up and drop people off around the city. No need to go any faster than 33 [mph]. At the time, in 1962, 33 [mph] was quite a respectable speed."

As the old double-decker chugged slowly along highways in Iran, Nepal, Singapore, Colombia and California, it has taught the family things about the people who inhabit these places. It has taught them about the notion of civility.

"You know you don't see a bus like this everyday," Feraud says. "But still people will give you the finger because you're too slow, or shout at you, swear at you, you know."

In Third World countries, though, they say they didn't get the finger and there was no shouting.

People "wave and they're just so happy. ... You feel, hey, this is what you call a civilized country, because civil mean polite," Feraud says.

Of all the places they traveled around the globe, their least favorite locale was in the United States — the Golden State, to be exact. The couple said they got "a lot of finger" in California.

"Yeah, it wasn't a good place," Harrison says. "We didn't enjoy California, and I don't think they enjoyed us."

Meet At The Piazza

The trio has been on the road for so long that they've witnessed how selectively the digital revolution has changed the world. Cell phones and text messaging are everywhere, but some cultures seem to have surrendered to these more than others. Feraud and Harrison say some places, particularly in Latin America, still prize human interaction over wireless communication.

"And then when you get back to the West with all our high-tech stuff, you see how people have lost all their communication skills, the really important skills," Harrison says. "Just being able to sit and meet at the piazza, just sit and exchange, have a drink together. It's not happening enough."

Longing for a Home Base

As their adventure rolls to a close, they're still looking for a few more performance gigs on the East Coast. But when their U.S. visas expire next month and their bus is in the hold of a ship steaming toward Southhampton, England, they hope to find a real home in Europe.

How long they'll stay put is anybody's guess. Harrison says he wants to acquire a boat big enough to accommodate the bus, and then take the circus to small islands inaccessible by commercial freighter — the Sprockets' second world tour.