Accessibility links
Edwards: Endorsements Don't Matter Former presidential candidate John Edwards refuses to endorse either New York Sen. Hillary Clinton or Illinois Sen. Barack Obama for the Democratic nomination. While Edwards says both would be strong candidates, the math involved in the race is no longer on Clinton's side. 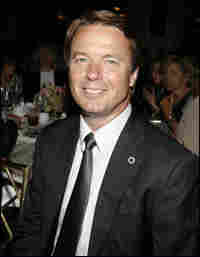 The former presidential candidate and former North Carolina senator told Michele Norris Friday that Illinois Sen. Barack Obama's lead in the popular vote and pledged delegate count presents a discouraging reality check in Clinton's continued bid for the Democratic Party nomination. As of May 9, Obama led Clinton in pledged delegates 1,588-1,425. A total of 2,025 pledged delegates is needed to secure the nomination.

Asked if Clinton should drop out of the race, Edwards said that only she could make that judgment. In his own case, Edwards said, "I made the decision a couple of months ago that my continued participation in the nomination process was likely to drag [the contest] out."

Edwards still has not endorsed either candidate, saying he "would not inflate the value of my supporting or endorsing any candidate. That's blown way, way out of proportion."

He contends endorsements carry more weight with the media than with voters: "I don't think they make a huge difference."

By not choosing sides, Edwards added, "I think I'm in a stronger position to push these issues that I care the most about...."

Poverty remains a key focus. Edwards spoke on NPR about "Half in 10," his new campaign, which aims to cut poverty in half within a decade and eliminate it in the next 30 years. Roughly one in eight Americans, or 36.5 million people, live in poverty in this country, according to the Center on Budget and Policy Priorities' analysis of 2006 U.S. Census data.

"What is required is sustained leadership and a sustained effort by the American people to address it again with the lessons that we've learned," Edwards said.

Steps such as raising the minimum wage, expanding the earned income tax credit and offering child care to low-income families would lift millions of people out of poverty, Edwards said.