Accessibility links
Umm Kulthum: The Voice of Egypt She had the musical chops of Ella Fitzgerald, the public persona of Eleanor Roosevelt, and the audience of Elvis Presley. More than 30 years after Umm Kulthum's death, Egyptians young and old still celebrate the voice of their country's greatest singer. 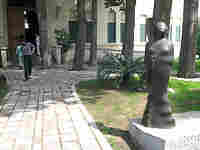 A statue of Umm Kulthum stands before a museum in Cairo devoted to her legacy. Davar Iran Ardalan hide caption 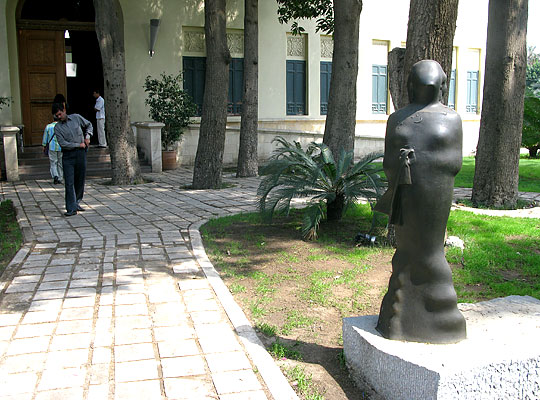 A statue of Umm Kulthum stands before a museum in Cairo devoted to her legacy.

The Sounds of Umm Kulthum

These two excerpts from the documentary film, "Umm Kulthum: A Voice Like Egypt," show the power and nuance of the great singer's voice.

Umm Kulthum sings a love song composed by one of her rivals. 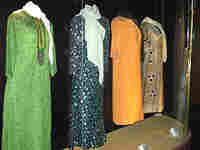 Several of the singer's famous dresses are on display at the Umm Kulthum Museum in Cairo. Davar Iran Ardalan hide caption 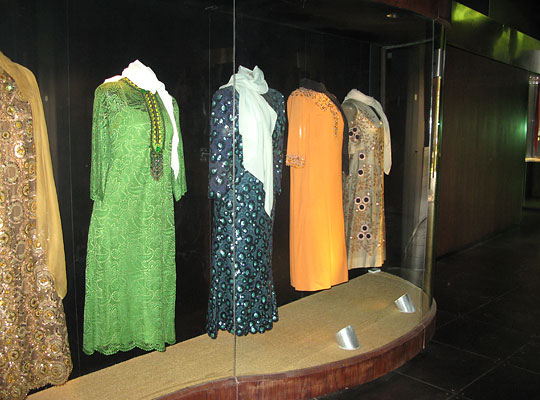 Several of the singer's famous dresses are on display at the Umm Kulthum Museum in Cairo. 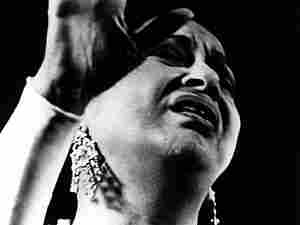 The name Umm Kulthum may not strike a chord to Western ears, but she was a larger-than-life presence in the Arab world. The Egyptian singer's career was long, its heyday extending from the 1930s to the 1960s, and her music became a powerful symbol of Arab nationalism. When she died in 1975 at the age of 70, 4 million people poured into the streets of Cairo to mourn her passing.

Today, her music is everywhere. Even at truck stops, CD kiosks are brimming with Umm Kulthum's many recordings. In the 1950s and '60s, her fame grew, thanks to her legendary live radio broadcasts. On Thursday nights, the streets of Cairo would empty as people gathered around radio sets to hear the great singer. You can still hear a lot of Umm Kulthum on Egyptian radio today. In honor of her famous broadcasts, her music is played at 10 p.m. on the first Thursday of every month.

Umm Kulthum lived on Cairo's Zamalek Island, on a quiet villa overlooking the Nile. Sadly, the house was razed in the early 1980s to make way for a block of apartments, but on nearby Roda Island, there now stands a bronze statue of Umm Kulthum in front of a palace that houses the Umm Kulthum Museum.

Dr. Walid Shosha manages the museum, and he's also a professor at the Academy of Arts. One display features two of Umm Kulthum's glamorous trademarks: the scarf she always held in her left hand as she performed and a pair of diamond-studded cat-eye sunglasses. Also on view are Umm Kulthum's luxurious dresses, gramophones, instruments and audio-visual displays.

"Visitors spend hours," Shosha says, "listening to Umm Kulthum, getting to know her, reading intimate articles about her life and the way she lived."

Also on display are books about the singer, including a biography written by Virginia Danielson, curator of the archive of world music at Harvard University. The recent documentary, Umm Kulthum: A Voice Like Egypt, was based on her book. Danielson says that Umm Kulthum's early religious training set the course for the singer's immaculate and nuanced diction.

"She was born to a poor family," Danielson says, "and at the time Egypt was under British occupation, and virtually the only schools that were available or encouraged were religious schools. Now what you learned was to recite the Koran, and that tended to give people a profound appreciation for the sound of the language. And, of course, the Koran is written in very elegant Arabic. Umm Kulthum had a very powerful voice, equally strong from the lowest to the highest part of her range, and she was musically very inventive. She schooled herself musically by learning to command the Arab musical system and learning to improvise in that system the way a jazz musician would improvise using the Western system."

"She had an ability to link musical improvisation to the meaning of the words that she was singing in such a way that the meaning was really felt by listeners. Many scholars say poetry is the art of the Arabs, and so to sing poetry well is something that will tend to garner great appreciation among Arabic-speaking listeners."

Umm Kulthum was also a master at casting a spell over her audiences. In the documentary, there's a clip of Umm Kulthum singing, sometime in the 1940s or '50s, and the audience begins to sing back phrases to her. Danielson says it has to do with the Arab word tarab.

"Tarab is a concept of enchantment," Danielson says. "It's usually associated with vocal music, although instrumental music can produce the same effect, in which the listener is completely enveloped in the sound and the meaning in a broad experiential sense, and is just completely carried away by the performance."

Umm Kulthum's music also lives on in U.S. The Arabesque Music Ensemble, a Chicago-based group, has released a CD featuring a trio of composers who wrote more than three-quarters of Umm Kulthum's songs. Arabesque member Hicham Chami says that Kulthum was adept at finding just the right material for her music.

"She was a no-nonsense businesswoman; besides her tremendous talent, she was very successful in surrounding herself with not only the finest musicians of that period, but also the finest composers. As young musicians, we decided it was about time to give credit to these composers, and reward their legacy."

Included on the disc is "Ghannili," a song made famous when Umm Kulthum sang it in a scene from the 1944 movie Sallama. Youssef Kassab, a singer with the Arabesque Ensemble, remembers seeing Umm Kulthum when she gave a concert in Damascus, Syria.

"She was maybe 50. I was 16 at the time. My father took me, and I listened to Umm Kulthum. I saw her outside, with her chauffeur. He opened the door for her, I looked and she [was] wearing red. Even her socks were red. Shoes red, purse red. Like a queen! Umm Kulthum, she's number one to me."

It's been well over 30 years since Umm Kulthum died. But through her recordings, her millions of fans and the new documentary, the great voice of Egypt will live on for many years to come.