Accessibility links
Political Comebacks: The Art of the Putdown Politicians are known for delivering a scripted message. Those who stray far from their prepared remarks often find themselves in trouble. But a select few who dare — think Winston Churchill or Daniel Webster — can make a point with their quick wit.

Listen
Political Comebacks: The Art of the Putdown 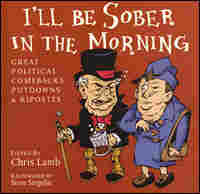 Politicians are known for delivering a scripted message. Those who stray far from their prepared remarks often find themselves in trouble. But a select few who dare can make a point with quick wit.

Daniel Webster, the 19th century orator, had this to say when offered the vice presidency: "I do not propose to be buried until I am dead."

That's one of the quips from a collection called, I'll Be Sober in the Morning: Great Political Comebacks, Putdowns and Ripostes.

The title comes from a particularly biting comment from a master of political wit, Winston Churchill.

As the book's editor, Chris Lamb, warns, political sparring is not for the faint of heart.

"The wit here is very mean-spirited," Lamb tells Renee Montagne. "A good comeback ... you want to leave your opponent red-faced and stammering and left [to] sort of pick up the pieces of their manhood in a thimble and go skulking off in silence."

Churchill makes frequent appearances in the book. The British prime minister "could be so cruel and he would use his humor definitely as a weapon," Lamb says.

Such as in this exchange with Nancy Astor, an American-born politician in England:

Astor once shouted at Churchill, "If you were my husband, I'd put poison in your coffee."

His response: "If I were your husband, I'd drink it."

During one of his campaigns against President Eisenhower, Adlai Stevenson was approached by a supporter.

"Governor, every thinking person will be voting for you," she told Stevenson.

"Madam, that's not enough," he replied. "I need a majority."

Lamb says only a small group of politicians are good at the witty comeback. "It comes probably through seasoning, it comes from paying attention, and it comes perhaps from a heart that's a little darker than others," he says.

Excerpts: 'I'll Be Sober in the Morning' 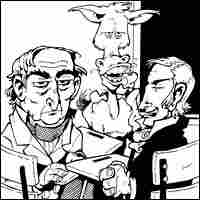 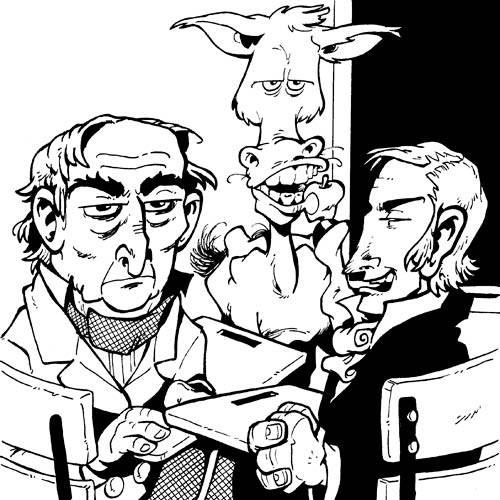 Politicians have been slinging barbs at one another, at reporters, hecklers and critics for at least 2,500 years, as I'll Be Sober in the Morning documents. There are nearly 200 comebacks, putdowns and ripostes in this little book. Here is a sampling.

Winston Churchill had been drinking heavily at a party when he bumped into Bessie Braddock, a Socialist Member of Parliament.

Churchill paused and said, "And Bessie, you are ugly. You are very ugly. I'll be sober in the morning."

Henry Clay was sitting outside a Washington hotel with Massachusetts Senator Daniel Webster.

They watched a man walk by with a pack of mules and Webster remarked, "Clay, there goes a number of your Kentucky constituents."

"Yes," Clay replied, "they must be on their way to Massachusetts to teach school."

John Wilkes, an eighteenth-century political reformer, was involved in a particularly angry exchange with John Montagu, the Fourth Earl of Sandwich. "Sir," Montagu exclaimed, "I do not know whether you will die on the gallows or of the pox!"

During a television debate against incumbent U.S. Senator Fritz Hollings in 1986, Republican candidate Henry McMaster challenged his opponent to take a drug test.

In the fifth century B.C., Alcibiades debated his uncle, the Greek orator Pericles.

"When I was your age, Alcibiades, I talked just the way you are now talking," Pericles said.

"If only I had known you, Pericles," Alcibiades replied, "when you were at your best."

At the Versailles Peace Conference in 1919, Georges Clemenceau held out for the harshest terms against Germany. Someone pointed out that historians would be arguing for generations over who was responsible for starting the Great War.

"Yes," Clemenceau said, "but one thing is certain: They will not say that Belgium invaded Germany."

To which Lincoln replied, "I leave it to my audience. If I had another face, do you think I would wear this one?"

Just after the 1992 Republication National Convention, Vice President Dan Quayle revealed that he planned to be "a pit bull" in the upcoming campaign against the Democratic presidential candidate Bill Clinton and his running mate Al Gore.

When Clinton was asked for his reaction, he replied: "That's got every fire hydrant in America worried."

When the Reverend Edward Everett Hale was chaplain of the U.S. Senate, he was asked if he prayed for the Senators.

"No," he said. "I look at the Senators and pray for the country."

Once when television reporter Andrew Kirtzman was interviewing New York Mayor Ed Koch, the reporter pressed the mayor on an inconsistency.

Finally, Koch, a bit frustrated, leaned closer to the reporter and said, "I can explain this to you; I can't comprehend it for you."

A foreign diplomat walked into Abraham Lincoln's office while the president was polishing his shoes.

"Mr. President!" the startled diplomat said with disdain, "you black your own boots?"

"Yes," Lincoln said, "whose boots do you black?"

Playwright George Bernard Shaw invited Winston Churchill to the first night of his newest play, enclosing two tickets: "One for yourself and one for a friend – if you have one."

Churchill wrote back, saying he couldn't make it, but could he have tickets for the second night – "if there is one."

U.S. Supreme Court Chief Justice Melville W. Fuller was presiding at a church conference when an audience member rose and began a tirade against universities and education, saying that he gave thanks to God that he had never been corrupted by any contact with a college.

"Do I understand the speaker thanks God for his ignorance?" Fuller interrupted.

"Well, yes, if you want to put it that way," the man answered.

"Then," Fuller replied, "you have a great deal to be thankful for."

The conservative Winston Churchill was often at odds with Clement Attlee, leader of the Labor Party, which advocated a greater role for government in economic policy. Churchill once entered a men's room to find Attlee standing at the urinal. Churchill took a position at the other end of the trough.

"That's right," Churchill responded. "Every time you see something big, you want to nationalize it."

Excerpted from I'll Be Sober in the Morning: Great Political Comebacks, Putdowns and Ripostes, edited by Chris Lamb.

Chris Lamb's Blog: 'I'll Be Sober in the Morning' 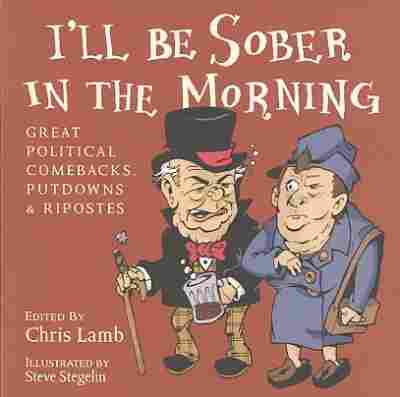 I'll Be Sober in the Morning

by Chris Lamb and Steve Stegelin