Accessibility links
Commission Calls for MLK Statue's Redesign The sculpture of Martin Luther King Jr. intended for a memorial on the National Mall in Washington, D.C., is too "confrontational," according to the U.S. Commission of Fine Arts. The commission's approval is necessary for any monument or memorial in the capital. The commission says the sculpture needs to be reworked. 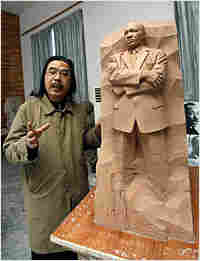 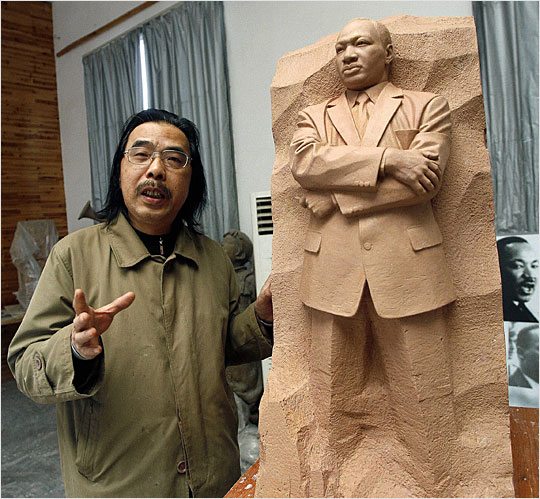 Lei Yixin shows off a model of a Martin Luther King Jr. statue at his studio in Hunan province, China, last year.

The Martin Luther King Jr. National Memorial is going to be big. The site for it is a four-acre plot on the Tidal Basin, not far from the Jefferson and Lincoln memorials on the National Mall in Washington, D.C.

Water, stone and trees are the primary elements in a design inspired by a line in the Rev. King's "I Have A Dream" speech:

"With this faith, we will be able to hew out of the mountain of despair a stone of hope."

In the original design for the MLK memorial, a bust of King emerges almost organically out of the side of the Stone of Hope. To get to the stone, a visitor would walk through two rocks symbolizing the Mountain of Despair. That design won the competition set up by the U.S. Fine Arts Commission, the federal agency that approves anything that gets built on the National Mall.

But in the new model for the statue, King is much bigger. His arms are crossed defiantly and he has a solemn look on his face.

In a letter calling for revisions to the statue, Thomas Luebke, who heads the commission, said King's character had gone from "meditative" to "confrontational."

"It looks more like the Stone of Hope is just background. There's now a more full body sculpture of Dr. King. It's a much more rigid, symmetrical stance," Luebke said.

The architects of the memorial are considering what modifications they'll make to meet the commission's request. But Harry Johnson, president of the Martin Luther King Jr. National Memorial Foundation, likes the idea of King standing tall.

He says he agrees King's facial expression needs softening, but he wants the statue to be an expression of strength.

"The bottom line is, do you want an African-American man not standing tall?" Johnson says. "The Dr. King we want to see is a warrior of peace, not a warrior of wars."

The new design for the statue was carved by Chinese sculptor Lei Yixin. And any controversy about his work is fodder for the people who opposed the decision to hire him in the first place. The MLK National Memorial Foundation was criticized for not hiring an American artist. Lei has carved many Chinese officials over the years, including Communist leader Mao Zedong.