Accessibility links
Homosexuality Panel Squelched by Gay Activists Gay psychiatrist David Scasta organized a panel on religion, homosexuality and therapy that claims to "cure" people of being gay. It was to include openly gay bishop Gene Robinson and conservative Christians who call homosexuality a sin. Scasta ended up canceling his own panel.

Religion and the 'Cure' for Being Gay 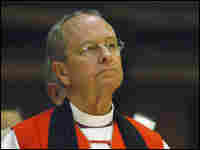 Gay psychiatrist David Scasta organized a panel on religion, homosexuality and therapy that claims to "cure" people of being gay. It was to include openly gay Bishop V. Gene Robinson and conservative Christians who call homosexuality a sin. Scasta had high hopes for the panel, but after infuriated gay activists complained, he called it off.

The self-described quiet gay activist says he wanted to address the needs of gay and bisexual patients whose religious beliefs might prompt them to seek some kind of "cure" for their sexual orientation.

Scasta says he is concerned about people who grow up in conservative religious traditions that tell them they're going to hell.

"If you literally believe in a literal hell where you are going to burn and fry and be in excruciating pain not just for a moment but for eternity because you're a gay person, then how do you go to psychotherapy in which somebody like me would be telling you that to have a happy life, in this life, you need to learn to accept who you are?" he asks.

In their desperation, gay religious people sometimes end up choosing "change" or "reparative" therapies that are "not well researched, not well supported," Scasta says.

The workshop — "Homosexuality and Therapy: The Religious Dimension" — was scheduled for last Monday, at the American Psychiatric Association's annual convention. Scasta had hoped for a discussion that might begin to bridge the gap between sides with very different opinions on a core issue. On our blog, an open thread on the discussion that wasn't.