Accessibility links
More Women Join Ranks of Suicide Bombers in Iraq Since the beginning of 2008, the U.S. military reports 14 female suicide bomb attacks in Iraq, up from eight such incidents in 2007. Preventing such attacks — which have caused some of the highest numbers of casualties in recent months — is a challenge. 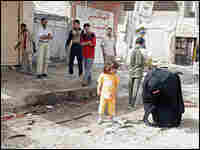 Iraqis inspect the site of a suicide bomb attack at Balad Ruz, about 45 miles north of Baghdad, on May 2, 2008. The double suicide attack that killed 29 people and wounded more then 52 was remarkably similar to Um al Harith's plan. AFP/Getty Images hide caption 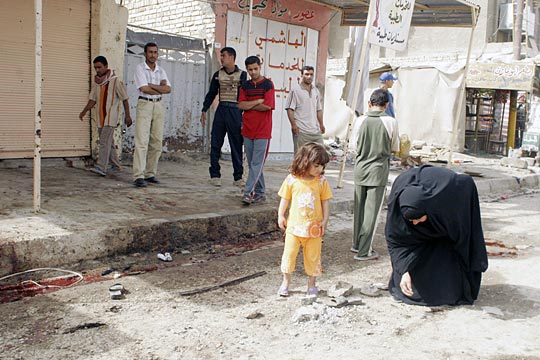 Iraqis inspect the site of a suicide bomb attack at Balad Ruz, about 45 miles north of Baghdad, on May 2, 2008. The double suicide attack that killed 29 people and wounded more then 52 was remarkably similar to Um al Harith's plan. 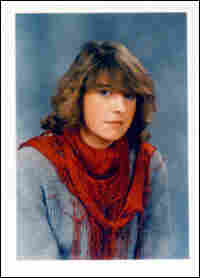 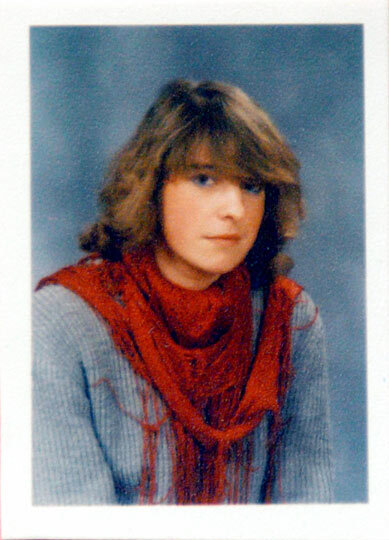 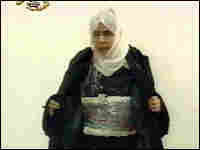 Sajida Mubarak Atrous al-Rishawi was involved in another high-profile suicide bomb attack. The Iraqi would-be suicide bomber was arrested after she failed to self-detonate during a triple suicide bombing against hotels in Amman, Jordan, in November 2005. Getty Images hide caption 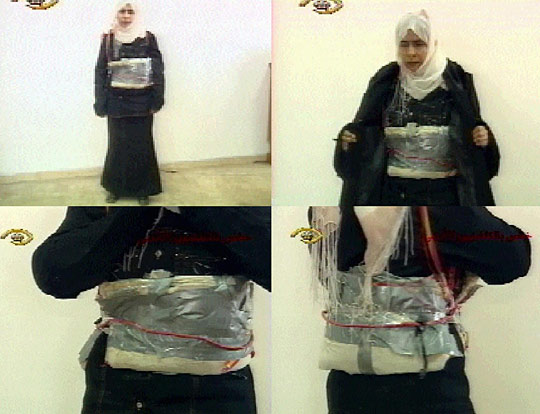 Sajida Mubarak Atrous al-Rishawi was involved in another high-profile suicide bomb attack. The Iraqi would-be suicide bomber was arrested after she failed to self-detonate during a triple suicide bombing against hotels in Amman, Jordan, in November 2005.

Since Jan. 1, the U.S. military reports 14 female suicide bomb attacks in Iraq, up from eight in 2007. Preventing such attacks — which Iraqi government officials say have caused some of the highest numbers of casualties in Iraq in recent months — is a challenge.

"It's a new trend," said Farhana Ali, an international analyst with the Rand Corp. who has studied female participation in guerrilla movements from Latin America to Southeast Asia. "Never before in the history of Iraq have you seen women take on such a tactic as suicide terrorism."

The U.S.-backed Iraqi government is conducting studies, trying to determine why women are choosing to commit suicide attacks.

In a videotaped interview, filmed by an Iraqi journalist working for NPR, an Iraqi woman named Um al Harith explained why she tried to become a suicide bomber. The 28-year-old wore a black veil during the interview to protect her identity, although she doesn't normally wear one in public.

It started, she said, when her beloved older brother Mohammed died fighting against U.S. troops in Diyala province, north of Baghdad.

"I collapsed. My life was destroyed," Harith said, her voice cracking.

"When I saw Americans in the street, or guards, or anyone who cooperated with them, I felt something inside me, like I wanted to tear them to pieces. Tear them to pieces. Cut them to pieces!" she repeated, shaking her head as she spoke. "Then one day my husband told me we were going to carry out an operation."

Harith's husband was an Arab from outside Iraq, whom she met and married after he moved to Iraq to fight the U.S. occupation. He proposed that the couple carry out a double suicide attack against a nearby Iraqi army base. Harith says the plan called for her to detonate the first bomb.

"The guards just stare when a woman walks past, and they never search women. So I would go inside [the base] first wearing a suicide vest. And when they all gathered around me I would blow myself up. Then when people were busy with the explosion, my husband would drive a car bomb into the military base. Afterwards, he and I would meet in heaven next to God almighty."

In the end, Harith never became a suicide bomber. One day before the attack was to take place, she says, her husband was killed while reconnoitering the base.

But on May 1, just a few months after this interview, 29 people were killed and more than 52 wounded in the nearby town of Balad Ruz, in a double suicide attack that was disturbingly similar to Harith's plan.

U.S. military spokesmen say a woman pretending to be pregnant detonated her explosives by a cafe in the town center. "The intent was to draw in the first responders and the emergency crews. And then the second bomber was a male," says Col. Don Bacon. "That was the explosion that caused most of the casualties."

Connections to Al Qaeda in Iraq

There is one widely reported case of a Belgian woman, a 38-year-old Muslim convert named Muriel Degauque, who carried out a kamikaze attack against American troops in Iraq in 2005.

But U.S. and Iraqi officials say most of the female bombers tend to be Iraqi Sunni Arabs. Many are believed to have a family connection to insurgent groups like Al Qaeda in Iraq.

"Some of them have lost loved ones due to their terrorist attacks or operations by the Iraqi security forces or by the coalition forces," says Bacon. "There may be some revenge motive as well."

Noor Abid Ghazal, 20, says she wasn't motivated by revenge when, wearing an explosive belt, she approached a Shiite parliament member's home in Baghdad in 2005.

She says she was tricked by a group of insurgents.

"They fed me sedative pills and made me drink alcohol, then wrapped my body with explosives," Ghazal says. "I didn't know what I was doing."

Ghazal spoke to NPR in a crowded women's prison in Baghdad, where she was serving a seven-year sentence for "terrorism." Iraqi police arrested the young woman when she fainted outside the parliament member's house.

An Iraqi social worker familiar with Ghazal's case says she was a teenage orphan who fell in with a gang that carried out insurgent attacks. Ghazal says men in the group beat her and raped her at gunpoint.

Women's rights activists say Iraqi women have increasingly become the victims of violence, as Iraqi society has degenerated into anarchy since the U.S. invasion of Iraq.

"We had more social freedom [under Saddam Hussein]," says Dalal Jumaa, an activist with the Organization of Women's Freedom in Iraq, "Life wasn't as severe or strict for women as what we see today."

Jumaa says three women in her neighborhood have been murdered by militiamen who have never been punished.

According to a recent poll conducted by Women for Women International, 63 percent of Iraqi women surveyed said violence against females is increasing.

That makes women more vulnerable to exploitation by insurgents, who may see female bombers as a strategic asset.

"Women are able to shroud their weapons underneath their abayas, their Islamic dress," says analyst Ali of Rand. "In doing so, they're becoming invisible and it's actually creating an enormous security problem for U.S. and Iraqi forces." Islamic tradition prevents men from searching Iraqi women.

"There's a security gap, and they're exploiting it well," explained a high-level official in the Iraqi Ministry of Interior, who spoke to NPR on condition of anonymity.

At an army checkpoint in downtown Baghdad, Iraqi soldiers said they were far more afraid of passing women than of male drivers and pedestrians.

"We have orders to shoot dead any woman who comes with a speeding car and refuses to stop," said an Iraqi sergeant, as he watched vehicles slowly roll past his concrete bunker.

There are very few female officers working in the Iraqi police and army. Iraqi security forces have announced plans to recruit more women to face the growing threat from female insurgents.

In the meantime, the growing number of female suicide bombings has raised fears among ordinary Iraqis.

"I'm more suspicious of women than men now," said Ali Abdul Amir as he navigated his battered orange-and-white Volkswagen taxi through bumper-to-bumper Baghdad traffic. "When a female passenger leaves my car, I search the vehicle to make sure she hasn't left any explosives behind."

Um al Harith explains why she was prepared to be a suicide bomber and how she would have carried out her attack against U.S. troops in Iraq.