Accessibility links
Mammoth Tomatoes Arose from Genetic Mutation Those softball-size tomatoes at the supermarket get their heft from a simple genetic mutation that creates extra compartments. 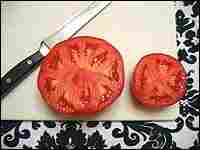 If not for the control of one gene, the world might be overrun with giant tomatoes. Cornell University scientists have come to this conclusion through their efforts to understand why the tomatoes we buy in grocery stores are so much larger than those grown in the wild.

Their findings on a mutation of the fasciated gene appear in a study published online this week by the journal Nature Genetics.

Plant geneticist Steven D. Tanksley, one of the study's authors, researches how domesticated plants differ from their wild ancestors. Versions of the wild tomato still exist, he says, but they're easy to overlook.

The fruits, he says, are "about the size of the tip of your little finger and weigh only 1 to 2 grams ... If you see one of these plants in the wild, the fruits are so inconspicuous that you may not even see them."

Many cultivated varieties are bred for flavor. But even if the wild tomatoes tasted good, getting enough to make a meal would be tough. So early farmers were on the lookout for larger varieties as they began to domesticate the tomato plant thousands of years ago. Eventually, some lucky Mr. Green Jeans stumbled upon a plant that had undergone a mutation in the fasciated gene, and introduced it into the domesticated tomato lines.

"This apparently was a new mutation, [occurring] very recently in terms of evolution, and it made a big impact when humans saw it and selected it," says Tanksley.

The fasciated gene keeps the lid on a tomato's size by controlling the number of its compartments. A cross-section of a big fruit, such as a beefsteak tomato, reveals triangular compartments divided by soft flesh that holds seeds, "and these large tomatoes have anywhere from five up to 20," Tanksley says.

A small mutation in fasciated was enough to produce a large tomato. "When this gene is normally expressed, it's basically ... not letting the compartments go above a certain number," Tanksley explains, describing the gene as a "stop sign" of sorts, which tells the fruit: "Stop here — you already have two or four compartments."

So, could a more serious mutation lead to a tomato the size of Brooklyn? Probably not, says Tanksley. A large mutation would probably be lethal to the tomato plant. But, he admits, it's an interesting point for speculation.