Accessibility links
A Glimpse of Pre-Quake Chengdu The beautiful, booming capital of China's Sichuan province draws tourists the world over with its majestic mountains and panda research center. It lies about 60 miles from the epicenter of Monday's deadly temblor.

A Glimpse of Pre-Quake Chengdu

A Glimpse of Pre-Quake Chengdu 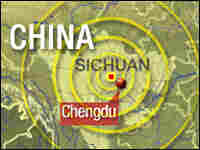 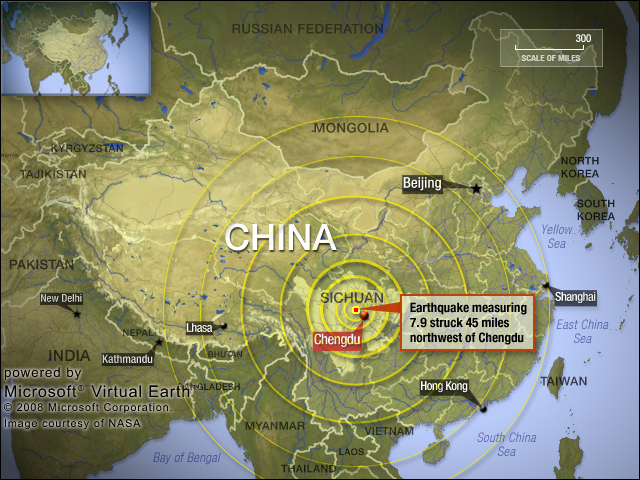 Hosts and producers of 'All Things Considered' were in China when the earthquake hit. They report on its aftermath.
Thousands Feared Dead as Earthquake Hits China May 12, 2008

Chengdu, the capital of Sichuan province, is about 60 miles southeast of the epicenter of Monday's deadly earthquake in China. The 7.9-magnitude quake snapped water lines and swayed buildings in the city, which has a population of 11 million in an area about half the size of Rhode Island. At least 45 people there were killed, the state-run Xinhua News Agency reported.

Witnesses watched the ground ripple as people poured into the streets. Aftershocks have hit throughout the day, and fearful residents spent the night outside or headed to the suburbs — away from the city's high rises.

As the damage is assessed, here's a quick look at Chengdu before the temblor struck.

The city has become a magnet for growth, pulling in people from farms and villages in Sichuan province with the lure of an easier and more exciting life. Tourists from around the world come to marvel at Chengdu's nearby majestic mountains, walk through stunning bamboo forests in a park to the south and to get a look at giant pandas.

Located midway across the country in Southwestern China, it's in a basin where considerable pollution remains trapped much of the year. Construction cranes hover above block after block of the city. Old neighborhoods have been torn down, replaced by utilitarian skyscrapers and apartment blocks.

Factories grind out products for both domestic and foreign consumption. Streets are clogged with cars. The city is building a subway system, and Chengdu's airport rivals any in the world with its airy, spacious design.

In the center of Chengdu, Mao's statue stands amidst capitalist neon and glitz. Western hotels are opening up (the Sheraton has been there for the best part of a decade, a Holiday Inn Express is about to open). Numerous stores sell expensive western brand-names to the upwardly mobile. There is even a Rolls-Royce dealership near the airport.

A steady stream of Western businesses such as Intel is setting up shop. There is also a growing international service sector — the local branch of the American Chamber of Commerce is headed by an entrepreneur who runs "The Coffee Beanery. Types of businesses choosing Chengdu are determined by shipping costs; the city doesn't have deep water access so transport is by land, air and rail.

Where the Pandas Are

Sichuan Province is panda-central. One of China's two major breeding centers has a beautiful facility on the outskirts of the city. Zhang Zhihe is the director of the Chengdu Research Base of Giant Panda Breeding. One of his innovations was changing the pandas' diet back to almost entirely bamboo, which dramatically improved both the pandas' health and propensity to procreate.

This is a city that cares about food. Sichuan fare is magnificent, provided you like food that leaves your lips numb.

There's a lively club scene in Chengdu. A local legend has it that the most popular club in town sells 450 bottles of Chivas Regal on a weekend night, usually drunk mixed with green tea.

The city also has a lively contemporary arts scene and a poetry circle.