Accessibility links
Cherchez La Chervil, the Forgotten Herb Though it may look like parsley, chervil is in a class all by itself. The spring herb with anise aromas is an obvious choice to accent other seasonal favorites such as salmon or trout, asparagus, new potatoes, baby carrots and salads of baby greens. 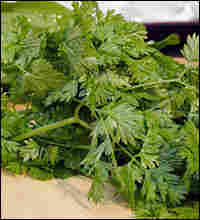 Chervil's subtle flavor, which primarily features anise aromas, is venerated in France — but flies largely under the radar in the United States. iStockphoto hide caption 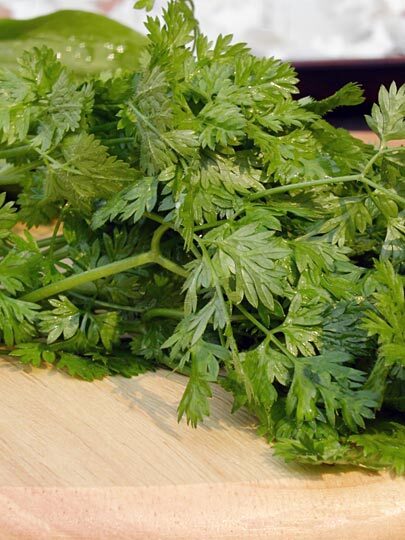 Chervil's subtle flavor, which primarily features anise aromas, is venerated in France — but flies largely under the radar in the United States.

Marion Barnes has been the food editor at several West Coast newspapers, perhaps because of all the fabulous cookbooks that she gets to preview. She also is an award-winning wedding cake designer and a flagrant baker.

Chervil came into my life about 15 years ago, when I was college student studying in Lyon, France. My culinary experiences there, given my youth, were many (7-franc bottles of wine and bread with no wrapper) and often shocking (poached eggs on pizzas and stores selling horseburgers).

I noticed other things. Whether or not the label disclosed the fact, anything chocolate included hazelnuts. Also, ham was inescapable, a real challenge to a borderline vegetarian like myself. Another omnipresent ingredient was fines herbes, a blend of dried chervil, chives, tarragon and parsley.

I'd heard of chives and parsley, of course, and tarragon sounded vaguely familiar. But chervil was new to me. How did it figure into the popular blend found in salad dressings, soup mixes and spreadable cheeses?

Chervil's subtle flavor, which primarily features anise aromas, seems a bit under the American radar. But in France, chervil is venerated in two forms: the dried version and the fresh greens that proliferate in the spring.

Still, even the lacy leaves generally are relegated to one-of-a-group status. The well-known "mesclun" salad mix — a Provencal blend that went through an American boom in the 1990s — traditionally includes chervil, arugula, lettuce and endive.

Another French standard that depends on the distinctive, licorice-lemon flavor of chervil is the Bernaise sauce often served with meat, poultry or vegetables. It is made of eggs, butter, white wine vinegar, chervil, tarragon and shallots.

A spring herb, chervil is an obvious choice to accent other seasonal favorites such as salmon or trout, asparagus, new potatoes, baby carrots and salads of baby greens. When using chervil as a flavor enhancer, it should be added right before serving. High heat ruins its flavor.

Chervil looks a lot like its parsley cousin. It also is related to the so-called turnip-rooted chervil, which is rare in the United States and eaten as a root vegetable in the fall.

A hearty annual, chervil is simple to grow. Many farmers markets and gourmet supermarkets stock the herb year-round.

The numerous names and different types of chervil undoubtedly lead to confusion among home cooks. The fresh leaves also are called cicily, sweet cicily, gourmet's parsley, French parsley and, in France, cerfeuil. The dried version is found in more products, but the fresh greens have far better flavor and more versatility.

Even before the French, the Romans enjoyed "the herb of rejoicing" (as it is translated from the Greek) after it was brought to them from the Russian Caucasus region. Not only was it used in culinary preparations, notably by the 1st-century scholar Pliny, it was thought to have diuretic, stimulating and "blood-purifying" properties. Even today, a tea brewed of chervil is recommended as both an eye wash and an aid for menstrual cramps.

When I left France, I stuffed several jars of fines herbes and herbes de Provence into my suitcases, believing I might never come across them on this side of the Atlantic. There they were, of course, on the spice shelf at my local grocery store. 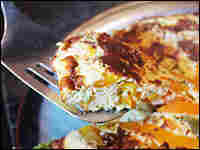 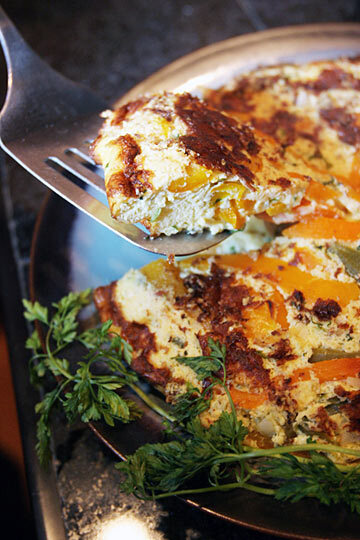 Chervil has long been a favorite in egg dishes, but usually in the dried form. This recipe takes a nice helping of the fresh greens and adds it to a mix of colorful bell peppers. The recipe is adapted from Vegetarian (The Williams-Sonoma Kitchen Library, Time-Life 1996).

Cut all the bell peppers in half lengthwise and remove the stems, seeds and ribs. Place cut sides down on a baking sheet. Broil until the skins blacken and blister. Remove the baking sheet from the oven, drape the peppers loosely with aluminum foil and let cool for 10 minutes. Using your fingers or a small knife, remove the pepper skins. Cut the peppers lengthwise into strips 1/4-inch wide.

In another bowl, whisk together the eggs, milk and Parmesan until frothy. Add the pepper mixture and mix well. Season to taste with salt and pepper.

In a 10-inch ovenproof frying pan over medium heat, warm the olive oil. When the oil is hot, add the egg mixture and, when it starts to set, lift the edges of the frittata with a spatula so that some of the egg mixture runs underneath.

Remove the frittata from the oven and loosen with a spatula. Invert the frittata onto a serving plate. Garnish with fresh chervil sprigs. 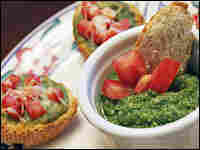 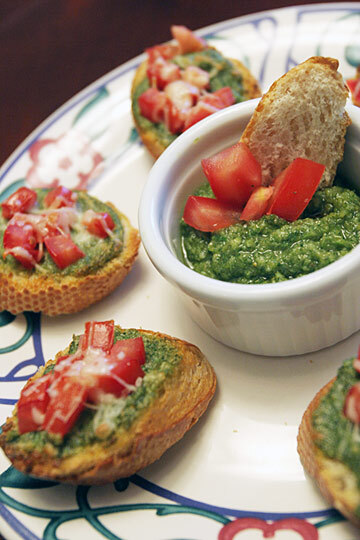 Pesto has been one of the most messed-with sauces in recent years, the basil being supplanted by green olives, parsley or even sun-dried tomatoes. But chervil pesto has such a tangy pepper-anise bite, I may never consider basil again.

To make the pesto, process the chervil, 1/4 cup cheese, pine nuts and garlic in a food processor until finely chopped. With the machine running, drizzle in the olive oil until the mixture reaches a pasty consistency.

Remove pesto from processor and spread on the sourdough slices. Place a small pile of tomatoes atop the pesto-covered slices, then sprinkle the remaining 1/2 cup cheese on top.

Place the slices on a baking sheet and set under the broiler. Make sure to stay nearby so they don't burn.

Remove the bruschetta when the cheese has melted and the bread looks crispy, about 8 to 10 minutes. 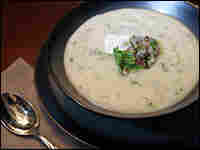 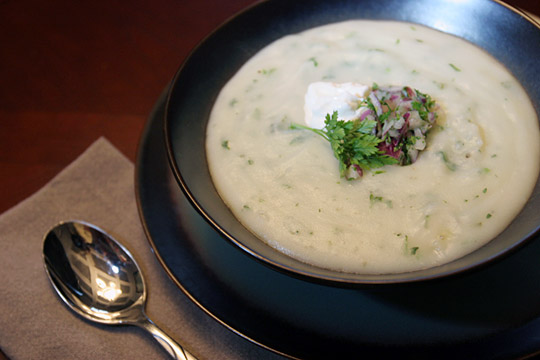 The flavor of the chervil in this soup is subtle, but the relish adds a spicy note to the springtime dish. The relish may also be used on sandwiches or with fish such as trout or salmon.

For the relish, add all ingredients to the bowl of a food processor and whirl until finely minced.

To serve, spoon the soup into 6 bowls, add a healthy dollop of the relish and remaining sour cream to the top.