Accessibility links
Rural Drivers Feel Sting of High Gas Prices With gas prices fast approaching $4 a gallon, rural drivers are feeling pinched by long commutes and the lack of public transportation. Costs are also rising for rural businesses that have to deliver goods and services. 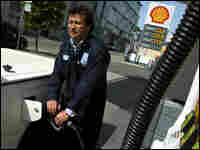 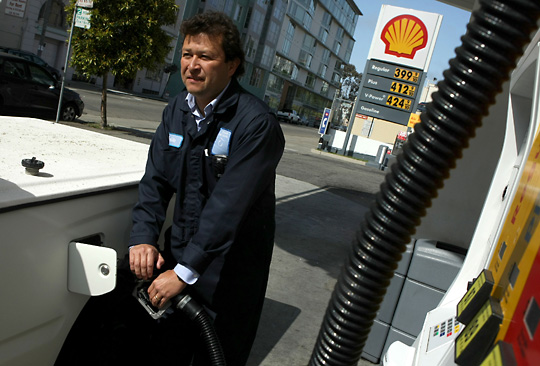 U.S. drivers, such as this one in San Francisco, have encountered record high gas prices. Those in rural areas feel especially pinched by long commutes and few transportation options.

Drivers across the U.S. are bracing for gas prices that could soon top $4 a gallon. Those soaring prices are especially harsh for drivers in remote, rural areas.

At Stewart's Shops convenience store in the remote mountain village of Tupper Lake, N.Y. — three hours north of Albany — cars are lined up, even though the price for a gallon of regular is $3.89. Rural drivers here face long commutes to work and often lack alternatives: no close neighbors to carpool with and no trains or bus routes.

Susan Neal, who lives in the neighboring village of Saranac Lake, travels an hour each way for her job teaching theater at SUNY Potsdam. The round-trip commute costs her $17.

"It does worry me, of course, and I pass by one station and on to the next and hope that perhaps the prices are a little lower," says Neal. She's already had to adjust her lifestyle because of higher gas prices. She eats out less and packs her lunch and dinner for work.

Gas prices also are making it more expensive for businesses in small towns. Furniture store owner Clyde Baker says the cost to deliver a dresser or a couch has more than doubled.

"We have to make sure and consolidate all our deliveries now," Baker says. "And now we've just set up so we have to start charging to go to those farther areas. We never had to do that before."

On average, rural workers earn substantially less than workers in cities and suburbs, which makes the sting even worse, according to the Economic Research Service, part of the U.S. Department of Agriculture. In upstate New York, angry callers to local talk radio stations have been demanding relief.

Where bus routes are available, ridership in these small towns has risen sharply — more than doubling in Clinton County and also escalating in Franklin County.

But most rural commuters say they're stuck with their cars and their big gas bills. And they fear that things will worsen this summer.

Looking past the summer, residents of northern towns remain concerned about whether heating oil prices will hit record highs next winter.