Accessibility links
Nissan Builds Buzz With Plans For Electric Car Despite warning of "tougher times" because of the weak U.S. economy, Nissan Chief Executive Carlos Ghosn said Tuesday that the automaker plans to become the global leader in zero-emission vehicles. 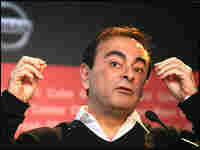 Ghosn delivers a speech during the Nissan 360 event on May 1 in Cascais, on the outskirts of Lisbon, Portugal. Francisco Leong/AFP/Getty Images hide caption 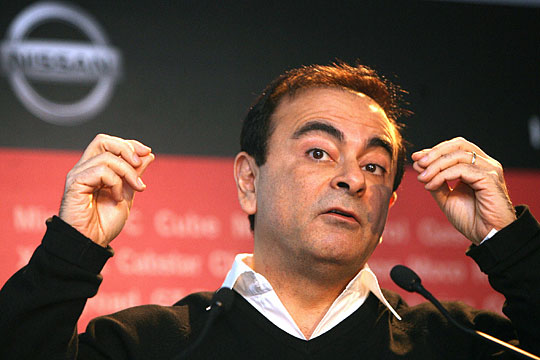 Ghosn delivers a speech during the Nissan 360 event on May 1 in Cascais, on the outskirts of Lisbon, Portugal.

Nissan Motor Co. announced plans Tuesday to build an electric car by 2010, part of what the automaker says is a strategy to make it the global leader in zero-emission vehicles.

Chief Executive Carlos Ghosn, who unveiled the plan at a news conference in Tokyo, says the company will mass produce electric cars within the next five years. He laid out a simple case for the vehicles: The number of people buying cars around the world is increasing, while the need to reduce emissions is becoming more urgent.

"There is a perceived conflict between the demand for more cars and the demand for a cleaner planet — 10, 20 or 30 percent lower emissions cannot be the only answer," Ghosn says.

The goal, he says, should be 100 percent lower emissions.

Although other auto industry executives have made this argument, they have estimated it will take at least a decade to get the right technology to build zero-emission cars.

"Today, there is latent consumer demand, but no offer," Ghosn says. "Nissan has an opportunity to mass market an affordable car that is both independent from oil and environmentally neutral."

The company will have zero-emission electric cars on the road in two years for government fleets in the U.S. and Japan, Ghosn says. The cars will be in mass production by 2012.

Nissan has not announced a specific model that will be mass produced. But in March, at the New York International Auto Show, the automaker unveiled an electric-powered concept car, the Denki Cube, which runs on lithium-ion batteries.

Ghosn also warned Tuesday that there are "tougher times ahead," joining the long list of auto manufacturers worried about what will happen to sales if the U.S. economy remains weak.

Nissan's chief executive has faced tough times in the past. Brazilian-born and raised in France, Ghosn is revered for saving Nissan from the brink of bankruptcy after he took the helm not long after the company merged with Renault in 1999.

Many industry analysts were skeptical about Tuesday's announcement by Nissan, which so far has not been a leader in hybrid or electric research.

"It feels like a target that I'm not sure they're going to make," say Stephanie Brinley, an analyst with AutoPacific.

She says Nissan is already behind in developing a new high-powered battery that's needed for an electric car. Toyota and General Motors are both further along.

Even if Nissan has a battery breakthrough, Brinley says, the company will still have to convince people that electric cars are worth buying.

"Particularly with the U.S. market, we haven't been all that accepting of electric vehicles before, so it has to be something pretty darn amazing to really get us to think about it," she says.

It is possible to buy an electric or zero-emissions car in the U.S. But for the most part the cars are tiny and can't travel very far without recharging.

There is the Tesla, a sleek two-seater that goes from zero to 60 miles per hour in four seconds. But its cost — the 2009 Roadster has a base price of $109,000-- puts it out of reach for most consumers.

Nissan has to do better to succeed, Brinley says. In the end, she notes, what's most important is that the automaker gets electric cars right, not that it gets them first.