Accessibility links
Captain Fatty Lives the High Life on the High Seas For 48 years, Captain Fatty Goodlander has lived aboard a sailboat exploring the world's high seas. This summer, he will send regular dispatches from his 38-foot cutter as he sails through Southeast Asia.

This summer, Weekend Edition Sunday follows Captain Fatty Goodlander as he sails through Southeast Asia and talks about his life at sea and his philosophy of freedom and discovery. 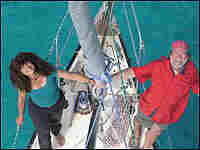 Captain Fatty Goodlander and his wife, Carolyn, on the bow of the Wild Card in the turquoise waters off Vava'u, Tonga. Jim Sublett hide caption 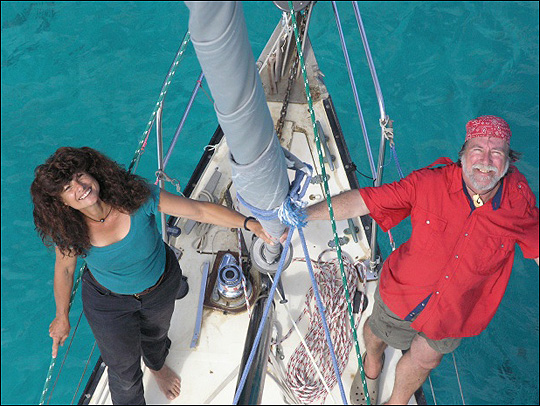 Captain Fatty Goodlander and his wife, Carolyn, on the bow of the Wild Card in the turquoise waters off Vava'u, Tonga.

From Aboard Wild Card

Captain Fatty Goodlander reflects on life on the high seas.

A Journey to Malaysia

The Magic of Lovely, Lonely Atolls

Sailing in the Slow Lane

A Lifestyle That's Tough on a Kid 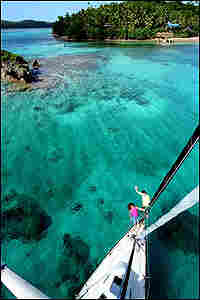 The couple on their 38-foot cutter, anchored in Vava'u. Jim Sublett hide caption 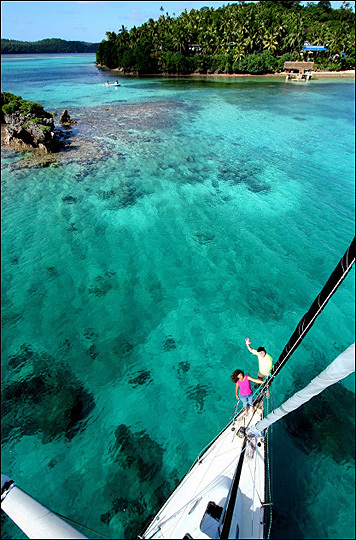 The couple on their 38-foot cutter, anchored in Vava'u.

Captain Fatty Goodlander is an original sea gypsy. The 56-year-old sailor has lived aboard boats for 48 years sailing the world's seas and circumnavigating the globe.

Goodlander and his wife, Carolyn, have sailed more than 100,000 miles on their 38-foot cutter, Wild Card, raised a family and scraped together a modest living from their floating home.

This summer, Goodlander, who is editor-at-large of Cruising World magazine, will send regular dispatches from his boat to Weekend Edition Sunday as he explores Southeast Asia.

"Sailing to me isn't just about boats and it isn't about the destination," Goodlander says. "It's about freedom, it's about passion, it's about lust, it's about life."

Wild Card operates around the clock, often sailing for a month at a time out of the sight of land. On some days, the boat travels only 50 miles, a pace that Goodlander takes in stride. He and his wife work together to captain the boat, taking turns keeping watch when the other is working or sleeping. The couple is constantly aware of their surroundings, he says.

"If you're careful and considerate of that environment, you can sail around the world numerous times," Goodlander says. "I feel like I'm a lot safer than if I lived in Chicago or Boston."

Goodlander, a journalist for 30 years, admits that living full-time aboard a small boat isn't the most lucrative job in the world, but he finds joy in touching others through his articles in Cruising World and through books he's written. The sailing life is something Goodlander says he'll never get out of his system.

"Freedom is my drug," he says. "Freedom is my God, and I mainline this drug. I want to be the man most capable of doing things on a whim."

The Life and Times of a Modern Sea Gypsy