Accessibility links
Auto School Wants to Extend Reach to China The automotive technology school at a small university college in upstate New York hopes to pair with a school in Dalian, China, to train technicians to work on new cars. SUNY sees it as an aggressive effort to make itself and its students relevant in the global market.

Read Part One of This Story 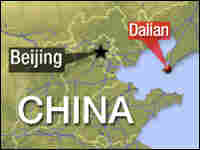 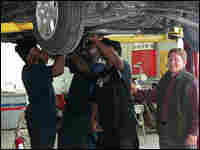 Professor Stephen Law (far right) with students at the automotive lab at the State University of New York's Morrisville college campus. Morrisville hopes to team up with Dalian, China, to help build a stronger automotive school at the University of Technology in Dalian. Larry Abramson/NPR hide caption 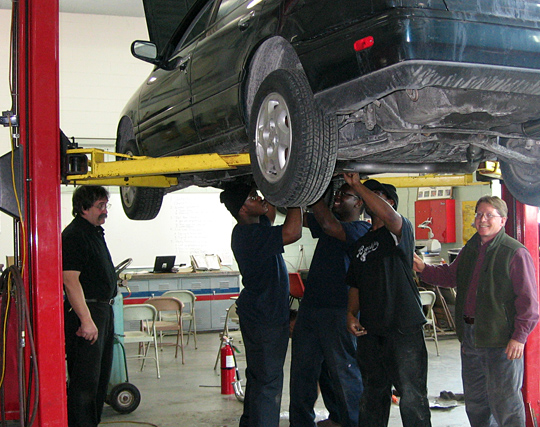 The State University of New York's Morrisville State College is known for two things: its equine science program and its automotive technology school.

SUNY Morrisville is small — only 3,400 students — and rural. But when it comes to teaching car repair skills, Morrisville is a leader. The school uses hands-on techniques to train people who would dare to repair today's highly computerized cars.

Morrisville has a mock showroom and a faux service desk, and the "labs" look like the bays where your dealer fixes your new car.

Last November, the faculty gave a tour of this facility to officials from Dalian, China, a coastal town with 2 million or so residents. According to Ray Cross, Morrisville's president, as more and more residents of Dalian buy new cars, they're going to need technicians trained to fix them. And right now, the city lacks technicians and training programs.

"In Chinese educational systems, service and technical people are often not part of a college system but more of a training process," Cross says. "In fact, it's the guy on the corner who figures it out for himself. You can't do that with modern vehicles."

So Cross and his colleagues have proposed helping Dalian's University of Technology build a facility like Morrisville's automotive technology school. But why should a small school in a cornfield in upstate New York go through all the trouble of setting up an exchange with a city on the other side of the globe?

The way Cross puts it, he has no choice.

"Because we're in a cornfield, and because we have more cows than people in this county, we have to take some aggressive postures in order to be more globally oriented, in order to better prepare our students for the future marketplace," he says.

Dalian professors may visit the Morrisville campus, and Morrisville faculty may go to Dalian for an exchange of ideas. Students at both schools would receive a "global" education.

Why is an American institution trying to help China — the competition — improve its higher-education system?

"How can you not help these folks? We're going to be selling vehicles there," Cross says. "We want to be part of that growing economy as well."

Indeed, SUNY is working on many fronts to break into the burgeoning world of Chinese education. The SUNY system is also trying out a pilot program with Nanjing University in China's ancient capital to develop a joint degree program.

These efforts take years or often decades to develop.

SUNY Professor Denis Simon of SUNY's business school has logged a lot of jet lag trying to arrange these partnerships. He's been making regular visits to China since the 1980s, and he has developed close relationships that have made the agreement with the city of Dalian possible.

"The Morrisville program will provide a vehicle for student exchange, for faculty exchange, probably for some technology transfer," Simon says. "In other words, it represents the kind of multifaceted relationship that SUNY is looking to have across a city such as Dalian."

Simon sees this relationship as a fair exchange. His university knows that as globalization hits higher education, SUNY had better be planning ahead. If SUNY does not sign up to work with the Chinese, some other school will.