CNN's Dan Rivers discusses the unique challenges confronting reporters and relief workers alike after a devastating cyclone in Myanmar left as many as 60,000 dead or missing. 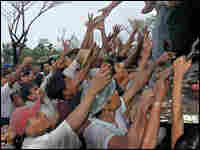 There is no shortage caused by the earthquake in China that's taken thousands of lives. International and state media are on the ground in Chengdu documenting the natural disaster and the government's response. But it's a very different story in Myanmar. Remember that other natural disaster that struck nearly two weeks ago? The cyclone that's left nearly 60,000 people dead or missing, and more than a million facing disease and hunger. The military junta in Myanmar has started to allow international aid to trickle in, but not aid workers or journalists for that matter.

Dan Rivers is a correspondent with CNN who managed to get inside Myanmar, but when the government found out and started chasing him down, he had to escape. Dan is back in Bangkok, Thailand, now, the staging ground for aide efforts for Myanmar, and he joins me now on the line. Dan, thanks for being here. I want to talk first about any affect that you have seen there on the ground in relation to the earthquake in China there. Some of the same international aid agencies that are there in Bangkok trying to get into Myanmar. Now that the China quake has happened, have you seen any pullout?

Mr. DAN RIVERS (Reporter, CNN): We haven't seen, as far as I'm aware, any staff being diverted up to China, but I guess on a sort of macro level it will only make things more complicated for the NGOs and aid agencies. They're already stretched and working around the clock and now having this other huge natural disaster in China is not going to make things any easier for sure.

MARTIN: You say that the U.N. has managed to get inside Myanmar to set up an operation base there. The first U.S. plane full of aid went into Myanmar next week, but is it getting to where it needs to go? Are you able to get information from Myanmar about the impact that that aid is making?

Mr. RIVERS: Well, it's very difficult to get a real true picture of what's happening because of the constraints that we've been under reporting inside the country. What I can tell you is that there are certainly concerns from the U.S. and the U.N. that the food that they're delivering is not getting outside fast enough from Yangon Airport to the Irrawaddy Delta.

MARTIN: As you say, it's incredibly difficult to report the story to figure out just what's happening on the ground. NPR, we also have a reporter there who has not yet been identified. We're keeping that person's identity anonymous. You yourself were in Myanmar reporting anonymously for awhile, but you made a decision to go on camera. What was - explain what was behind that decision?

Mr. RIVERS: Well, we were in there for about the first 24 hours reporting on the situation anonymously as you say, and we took the decision that my reports would have much more impact if I could appear on camera and look down the barrel of the lens and tell people how bad the situation was.

That has a lot more impact, in my view, on television if you have someone physically on your screen looking at you telling you look this is how bad it is, showing you, leading you through as a viewer, taking you by the hand and leading you through the story. The problem with just voicing over picture, it tends to wash over people.

MARTIN: But you knew you were taking a gamble because theoretically people would find out and your access would be shut off. So it's making that calculus. Do we do fewer reports...

Mr. RIVERS: Yeah. I mean it's a very fine judgment, and we think in hindsight it was the right thing to do. It certainly - our report certainly created a very big impact, and I think, you know, I hope that they generated a fair amount of publicity. They grabbed the attention of world leaders who suddenly realized, you know, this isn't just another disaster, this is a massive catastrophe happening right before our eyes and something needs to be done about it.

MARTIN: I know it was a long drawn out saga with many twists and turns most likely, but can you give us just the short version of how you got out of the country literally had to escape?

Mr. RIVERS: Yeah. Well, the thing is that I went on air, obviously I was sort of a marked man, and they distributed my photo around trying to find us. We were questioned in one town. The rest of my crew questioned, I was sort of remained hidden. Then eventually we were caught by the police. Luckily, I managed to show my passport without showing my name as I held my thumb over my surname, and they didn't twig who I was.

Finally, we were kind of escorted out of the area, we managed to talk our way out, got back to the main city, Yangon, and we decided it was time for me to leave. I got out, got onto the plane, managed to get through passport control, right on the way to sitting on the plane thinking I was home free and then the immigration officials and the secret police came and took me off and they questioned me and searched our bag. Luckily, I had nothing incriminating on me, no films or no cameras or anything, so they basically stamped deported in my passport and that was it, I was out.

MARTIN: Now you are back in Bangkok which is the staging ground for the aid efforts for Myanmar. I want to ask you about a larger international pressure - France has suggested just going in and delivering aid without permission from the military leaders in Myanmar and is pushing a U.N. resolution to make that happen. Have you heard any rumblings on the ground there that this idea might be gaining traction? Or are people or aid workers saying, gosh if the U.N. would only step in, then it would make things a lot easier for us?

Mr. RIVERS: Yeah. I mean this is an idea that's being sort of kicked around by Bernard Kushner. I mean I honestly can't see this getting much traction. I mean what they would basically be proposing was sort of almost kind of invading Burma and delivering aid without the permission of the army, but I mean, ideally, what needs to happen really is for the regime to be persuaded that these aid workers need to come in, that they're not there to do anything other than to help the people, and I think, you know, China is pretty critical in all this.

Now unfortunately, China is now suddenly preoccupied with its own natural disasters with its earthquake, but China does have a massive amount of influence in Myanmar to get them to open up a bit more. I mean that seems a more realistic possibility. I just can't see this idea of unilaterally the French navy sort of sailing in and sort of landing in the Irrawaddy Delta themselves. I can't see them going through with it.

MARTIN: Finally, Dan, there's word - there are reports out that another storm is headed that direction. How is that affecting people's psyche really as they're struggling to get in to deal with this first one?

Mr. RIVERS: Yeah. There's this low pressure system sitting out in the Bay of Bengal which is sort of nudging up exactly to the same area which is going to dump, I think it's 200 millimeters of rain, a huge amount of rain. You know, these people thought the worst was over and suddenly to see those skies darkening again and for that rain to come back again and the winds to pick up again, it's going to terrify them I'd imagine.

MARTIN: CNN's Dan Rivers, who joins us on the line from Bangkok, Thailand. Dan, thanks very much for sharing your reporting. We appreciate it.

Coming up on the program, it's all art, all the time, here at the BPP. I speak not just of the normally high level of artistry we bring to our craft, but art reporter Lindsay Pollock. She's talking about some major art auctions going on this week. Last night, a Rothko sold for 50 million dollars. What's all the hubbub over? Stay tuned and find out. This is the Bryant Park Project from NPR News.