Accessibility links
Getting Hooked on the 'Rite' Sound Igor Stravinsky's exotic, propulsive ballet The Rite of Spring captured conductor Marin Alsop's imagination at an early age. She says the music's "swing and sheer abandon" got her hooked, and the orchestra became her passion.

Marin Alsop conducts the complete 'Rite of Spring' in concert with the Baltimore Symphony Orchestra and members of the Peabody Symphony.

Le Sacre du printemps (The Rite of Spring), ballet in 2 parts for orchestra

Robert Craft, Conductor and Friend of Stravinsky, Describes the Innovations in 'The Rite of Spring' 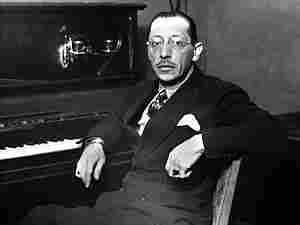 For every conductor, there is that seminal composition, that piece of music that makes one say, "I must conduct that piece someday." For me, that piece is The Rite of Spring by Igor Stravinsky. The music probably has more disciples, like me, than any other orchestral composition.

In 1913, when the piece made its debut, it was an impossibility to imagine anything like the Rite. It changed the course of music forever, and its premiere created one of music history's greatest scandals. All of that is amazing, but there's something almost intangible about The Rite of Spring that drew me under its spell.

First and foremost, it's the rhythm. As Stravinsky said, "There is no life without pulse," but there's pulse and then there's The Rite of Spring's pulse! This was the first time I'd ever heard more than 100 musicians bump and grind and totally groove together. The swing, the propulsion, the sheer abandon was overwhelming; any semblance of pretense or stuffiness fell away for me and I was hooked. The orchestra became my passion.

The Rite of Spring was the first orchestral score that I asked my father to buy for me, and I could spend hours poring over the mixed meters and ingenious bar-line placements. How could Stravinsky have thought this up?

I also fell under the spell of Stravinsky's alien sound world. The beginning of The Rite of Spring was the most foreign, exotic and evocative music I'd ever heard. The plaintive, almost straining bassoon solo in the opening still sounds like some new breed of snake charmer to me, oozing with clarinets while cajoling various creatures from their hiding places.

Seeing the natural world up close opened another doorway into The Rite of Spring for me when I left the big city for the countryside as a young adult. I was overwhelmed and sometimes terrified by the wildlife I came into contact with. (My personal experience did not extend beyond the standard New York City apartment wildlife.) Somehow, these new creatures conjured up the alien sounds of Stravinsky's music, becoming part of my personal picture of the opening section, called "The Adoration of the Earth."

In the early mornings, I would wake up to a chubby groundhog shaking the dew off his fur. This, for me, has become the English horn solo in the opening section, strutting obliviously around the yard.

I never knew how noisy bird life could be in the countryside, and the E-flat clarinet has come to remind me of all those insistent, unrelenting morning twitters. The alto flute, however, is a more graceful, slower-moving bird from the nearby lake that swings by now and then.

The bass clarinets conjure up bubbling, vomiting goop, and I've found that asking the musicians to "vomit" up their parts elicits the perfect interpretive results.

When I hear the two contrabassoons, I imagine a pair of enormous beetles munching their way through giant leaves. And the piccolo trumpet soars like a prehistoric flying creature, as my present experiences meld into my imagined ones, all in just the first three minutes of the music.

The cacophony of country living heats up to a frenzy before the meditative snake charmer reappears to again place the audience under his spell. But this time, the spell is broken by the throbbing life pulse in the "Dance of the Adolescents," signaling the start of spring.

One of my favorite Rite of Spring memories is of Leonard Bernstein rehearsing the piece with an orchestra of young musicians at the Schleswig Holstein Festival in Germany. He suddenly screamed out during the rehearsal, "Don't you get it? This piece is all about SEX!" Everyone was embarrassed, but also delighted.

In his inimitable way, Bernstein captured the piece's essence. The Rite of Spring is about basic, primitive, instinctual emotions, desires and reactions; for each of us, that triggers a different set of pictures and associations. It is a story of life as never told or heard before. Maybe that's the real spell cast by The Rite of Spring.

If you want to download The Rite of Spring concert performance I conducted, visit our Baltimore Symphony Orchestra Web site.