Accessibility links
Excerpt: 'An Infamous Army' This historical novel about the epic defeat of the Emperor Napoleon presents all the heroics and bloody loss of life of the battle of Waterloo — plus a romance between a strong-willed young woman and a dashing British Army officer. 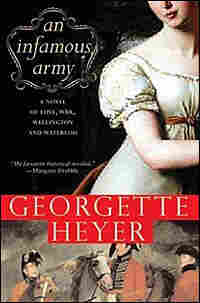 Colonel Audley had not exaggerated the difficulty of approaching Barbara Childe. When she left the dancing-floor on the arm of her partner she became engulfed in a crowd of impatient supplicants who would scarcely give place to any under the rank of a general. All had, however, to fall back before the Prince of Orange, who led Colonel Audley up to her ladyship, and said with his appealing smile: 'Lady Barbara, I want to present to you a friend of mine who desires beyond anything this introduction. Colonel Audley—Lady Barbara Childe!'

Colonel Audley bowed, and looked up to find the Lady Barbara's brilliant gaze upon him. There was candid speculation in it, a tolerant smile just parted the lady's lips. The Colonel returned the look, smiled, and said in his pleasant voice: 'How do you do?'

'How do you do?' responded Barbara slowly, still looking at him.

The Colonel, finding a gloved hand held out to him, took it in his, and bent his head to kiss it. Barbara looked down at it with a little bewilderment, as though she wondered why she had extended it.

'Do please grant the Colonel one waltz!' said the Prince, amusement quivering in his voice.

He moved away. The Comte de Lavisse said in English: 'But how should that be possible, one asks oneself?'

'May I have the honour?' said the Colonel.

'But no!' objected the Count. 'This leads to an affair of the most sanguinary! I shall immediately send my friends to call upon you!'

'We shall all send our friends to call upon you!' declared an office of the 1st Guards. 'Audley, this is piracy! Those wishing to dance with Lady Bab must present their credentials a full week beforehand!'

Captain Chalmers, of the 52nd, said: 'Send him about his business, Bab! These staff officers are not at all the thing. Stick the Light Division!'

'These Light Division men, Lady Barbara,' said Colonel Audley, 'fancy themselves more important than the rest of the Army put together. I tell you in confidence, but you know it is a fact that they brag shockingly.'

'An insult!' declared Chalmers. 'An insult from a staff officer! Bab, I appeal to your sense of justice!'

Barbara laughed, and, laying her hand on Colonel Audley's arm, said: 'Oh, the wishes of Royalty are tantamount to commands, gentlemen.' She kissed her hand to her court, and walked back on to the floor with Colonel Audley.

He danced well, and she as though by instinct. Neither spoke for one or two turns, but presently Barbara raised her eyes to his face, and asked abruptly: 'Why did you look at me so?'

He smiled down at her. 'I don't know how I looked. I have been wanting to dance with you all evening. Does every man say that to you?'

'I was afraid it must be so. I wish I might think of something to say to you which would interest you by its novelty.'

'No. If I said the only thing I can think of to say you would find it abominably commonplace.'

'I love you,' replied the Colonel. 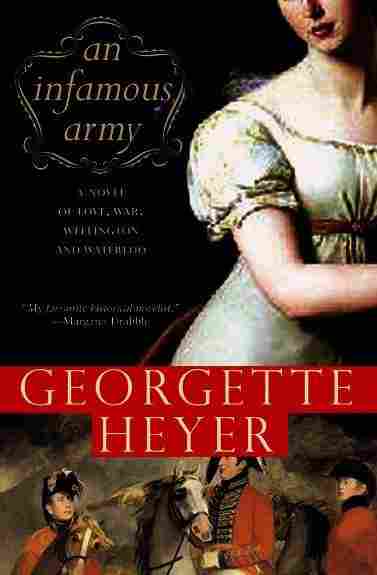