Accessibility links
Matana Roberts Blows in from 'Chicago' The saxophonist and composer grew up in the Windy City hating the avant-garde jazz that her father played. Now based in New York, her new album embraces her Chicago roots, as well as her "daddy's crazy music."

Matana Roberts Blows in from 'Chicago'

Matana Roberts Blows in from 'Chicago' 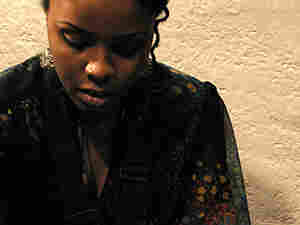 When she was 5, saxophonist and composer Matana Roberts was asked by her dad to listen to entire albums by progressive jazz musicians such as Sun Ra and Albert Ayler. By the end, she would be in tears.

Roberts then rebelled and started studying classical music. But she re-encountered the sax in high school, and has since made music that derives from what she used to call "daddy's crazy music." Her latest album is titled The Chicago Project, and she joined host John Schaefer to talk about it.

Though Roberts' music is derived in part from the avant-garde jazz of the 1960s and beyond, she says that she dislikes the label "free jazz." In fact, she says she's used her classical training to provide structure to her improvisations.

"Well, personally, I have a real problem with the term 'free' in regards to the music that I play, because as a composer there are a lot of structural bases there for me," Roberts says. "And I try to write in that way. And I guess studying classical music kind of set me up for that. And I think that one of the problems that I had with my dad and his music was that I just couldn't understand the formats. But now I have such an understanding of the format, it's not really that much of an issue."

For The Chicago Project, she relied on the talents of two prominent forward-thinking musicians — neither of whom actually play on the record. The record was produced by New York-based pianist Vijay Iyer, and John McEntire of the instrumental Chicago rock group Tortoise engineered it.

"I was looking for a really good-sounding record," Roberts says. "And I knew that John could deliver on that, but I also knew that having Vijay helping with the production side would be very helpful, because he's so experienced."

Though Matana Roberts has been based in New York for about six years, she felt inspired to center her new record on Chicago, where she grew up and learned to play the saxophone. So she brought together a group of Chicago-based musicians to perform her compositions, including a guest appearance by a long-time stalwart of the Chicago scene, club owner and saxophonist Fred Anderson.

"I decided to make sure I was charting my trajectory, kind of looking at the larger picture," Roberts says. "And I wanted people to be clear that my roots are very much still in Chicago. But also because it was such a comfortable situation, I felt like I had to make sure I was honoring the people that made it possible for me to even be here in New York."

It's not the first time Roberts has attempted to distill personal history into art. Her ongoing project Coin Coin draws on her family's genealogy back through 10 generations to the 1750s. The musical narrative she created was based on her own research.

"The slave code in Louisiana was very peculiar, and there were a lot of things that people of color could get away with in that state that they couldn't in others," she says. "So a lot of my family members from that area were very wealthy. And because of that, there were records — land records. And so I have records to those people going back to before the Louisiana purchase."

Roberts' family history hasn't always been an easy pill to swallow, she says. The many ethnic groups in her ancestry have fueled some interesting revelations, including the fact that some of her relatives passed as "white."

"So digging in this, I'm contacting people who didn't even know that I existed," Roberts says, "and trying to bring those together and also kind of codify the fact that, yes, I have a first cousin who, when they checked the box on race, they checked Caucasian. And I know I'm mixed with all sorts of things, but that kind of threw me into a loop."

Roberts remains committed, however, to telling her story in music.

"I mean, not only paying homage, but trying to dig so I can have a clearer understanding of who I am, or who it is I'm supposed to be," Roberts says. "That was one of the reasons I started the project.

"And the more and more I dug, I was like, 'Oh.' Well, let me see if I can take these lives, those people who probably thought their lives were very mundane, and make something creative out of it."