Accessibility links
L.A. Developer Sells 18 Houses in Single Auction For months now, Californians have been grappling with a hugely depressed housing market. A stressed builder managed to dodge the bullet, however, with an old-fashioned strategy. 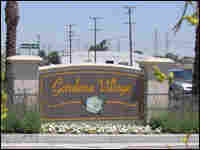 At one time, houses in Gardena Village were listed in the $700,000 range. Karen Grigsby Bates/NPR hide caption 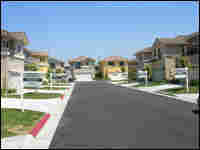 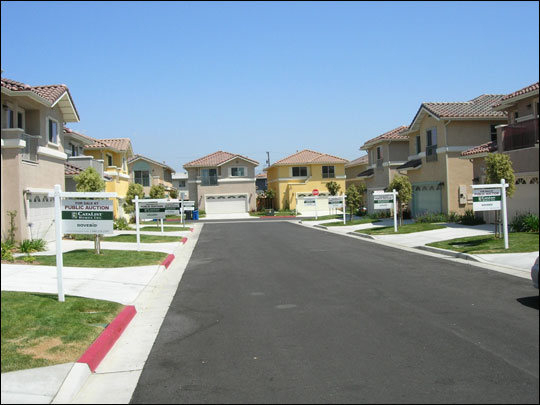 Until recently, all of Gardena Village was filled with for-sale signs.

For months, Californians have been grappling with a depressed housing market. Foreclosures are at a record high in parts of the state, and home sales have been sluggish at best. But one stressed developer in Los Angeles County found a way to dodge the downturn bullet and sell nearly 20 houses in a single day.

How did Cal Coast Development do it? It sold the homes through an old-fashioned technique: an auction.

There's Something About Gardena

The small city of Gardena, tucked just southeast of Los Angeles International Airport, is perhaps best known as the home of Hustler Casino, owned by mogul Larry Flynt. While Gardena lacks the glamour of its neighbor to the west, Hermosa Beach, its location made it attractive to builders when times were good. Situated near the intersection of two major highways and not far from the coast, some developers saw economic promise in the largely working-class town.

The gated community of Gardena Village was Cal Coast's attempt to embrace that potential. Its upscale homes were equipped with wireless Internet and designer kitchens with amenities such as granite countertops.

But before builders got to the second phase of construction in the neighborhood, the real estate bubble burst. For-sale signs became a permanent fixture on Gardena Village's pristine, empty streets. In seven months, only a single home sold.

Cal Coast, anxious to sell the empty homes, contacted the South Bay real estate company CataList Homes, which decided to try a little experiment. CataList spread the word that the entire development would be auctioned off on a single day, May 10.

On the Saturday of the auction, about 125 people crowded into a room at the Torrance Marriott, about five miles from Gardena Village, for a shot at buying one of the 24 homes on the block. All of the homes featured three or four bedrooms and ranged from 1,850 to more than 2,000 square feet, according to CataList. Bidding was set to start at $498,000 on homes that had listed for hundreds of thousands of dollars more.

One potential buyer, Euriel Reyes, arrived check in hand, with a specific house in mind. He pointed it out on the brochure.

"Perfect for our family, so we're gonna go for it," Reyes said.

About half the prospective buyers were Korean, reflecting Gardena's large Korean immigrant community. So many had expressed interested that a translator, Kevin Suh, was hired to help during the auction.

Suh says the Korean clients are attracted by the properties' value and their location.

The excited buzz that filled the room soon died down, and auctioneer Ross Dove of DoveBid Inc. began soliciting bids.

Hands went up all over the room. The bidding was frenzied and houses were going like they were free. A scant 38 minutes later, CataList had sold 18 of the 24 homes, totaling more than $10 million.

CataList President Mike Davin says he was thrilled by the success of the auction.

"I think this type of format shows that you can bring together the interested buyers and they can set the price for the project, which means the builder was able to get 87 percent, 88 percent of the last listed price," Davin says.

And this, he points out, is way better than the alternative: 100 percent of no sale at all.