Accessibility links
Songs of Sadr Provide Soundtrack for Shiite Militia The Iraqi government has banned the distribution and public broadcast of a popular genre of war-like songs that praise the fighters of Shiite cleric Muqtada al Sadr. Supporters say the music is patriotic; the government says it incites terrorism. 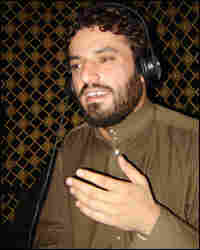 Ali Delfi's song "Taste the IED" praises the fighters of the Shiite cleric Muqtada al Sadr and has been banned by the Iraqi government for inciting violence. He is shown at his recording studio in the Sadr City neighborhood of Baghdad. Kais al-Jelele for NPR hide caption

Watch videos and read excerpts from the lyrics of songs praising the fighters of Shiite cleric Muqtada al Sadr.

'Taste the IED' by Ali Delfi

Read excerpts from the lyrics of "Taste the IED."

'I Am the IED' by Baha el Suwaedi

Read excerpts from the lyrics of "I Am the IED."

Read excerpts from the lyrics of "Sons of Sadr."

As part of its campaign against the Shiite cleric Muqtada al Sadr and his militia, the Iraqi government has imposed a ban on distributing and even playing in public a genre of war-like songs that praise Sadr's fighters.

The ban went into effect earlier this month. Four Shiite militiamen fighters ignored it, however, when they drove through the battle-scarred streets of Baghdad's Sadr City this week, blaring distorted music from loudspeakers.

The song they played, with its driving beat and chorus of male voices, is one of scores of war-like anthems that have effectively become the soundtrack for Sadr's Mahdi Army.

This month, the Iraqi government banned this kind of music. Qassem Adda, a spokesman for Baghdad's Law Enforcement Operations Department, says these songs promote terrorism, sectarianism and rebellion against the elected Iraqi government. Anyone caught playing them will be arrested and charged with inciting terrorism.

The spread of these CDs "instigate violence against the coalition and Iraqi forces, mostly in Sadr City," Adda said in a recent interview.

Adda is talking about songs like "I Am the IED," which refers to improvised explosive devices, the weapon of choice among Iraqi insurgents. The song is basically an up-tempo version of traditional Shiite religious chants known in Arabic as ashid husseiniyah. But instead of praising Shiite saints, this song glorifies roadside bombs.

The video of "I Am the IED" features a bearded young man who smiles and dances, gesturing with his hands as he chants lyrics such as "If an armored vehicle passes, I will blow it up / If I get thirsty, I will drink blood from a Hummer."

This cheerful, lip-synched performance is all the more jarring because it runs over a violent backdrop of insurgent video clips, which show American Humvees and tanks exploding while driving over Iraq's heavily mined roads. Sound effects, including explosions and machine-gun fire, are mixed in with the music.

Songs such as "I Am the IED" have become a pop-culture phenomenon in Iraq, particularly among young Shiite men.

Until the government ban, many taxi and bus drivers played the pro-Sadr songs as they ferried their passengers around the city. The music is a form of defiance against Iraqi authorities and a way for Sadrists to identify each other in the street.

The ban is now driving this music underground — or in the case of a CD salesman named Ali, under the table.

He now hides his stock of Sadrist songs in a box under the table of his stall in a Baghdad market. If he trusts you, he will sell you the latest album for the equivalent of a U.S. dollar.

Ali says several new songs were released after the Iraqi government launched a crackdown on Sadr's fighters in the southern city of Basra last March.

"These songs are patriotic," Ali says. "Sometimes customers use them as ringtones for their cell phones."

One of the most notorious Sadrist singers is Ali Delfi. His hit single, "Taste the IED," even can be heard sometimes playing at wedding parties in Sunni Muslim neighborhoods.

"Taste the noble IED, taste it, taste it," the chorus repeats. "Describe it to Bush and his slaves," Delfi then sings, "and tell him his army and his threats will burn like a house of reeds."

In person, Delfi is a slender, polite 26-year-old — hardly what one would expect from the firebrand who sings lyrics such as "Taste my bomb and feel its pain."

When asked whether he thought "Taste the IED" encourages listeners to plant bombs, he replies that it does — but only "against the occupation."

But, he adds, "I don't think those who listen to me would plant IEDs. There are special people who plant IEDs. Ordinary people don't make these bombs."

The singer insists he is trying to inspire resistance against what he calls an unjust U.S. military occupation — not against the Iraqi government, whose soldiers have also been fighting against the Mahdi Army.

Delfi has been singing Shiite chants since he was a child. But until 2003, he had to make and distribute his records secretly, because Saddam Hussein banned recordings of these Shiite chants.

Today, the singer's studio is located in the heart of Baghdad's embattled Sadr City, where Shiite fighters have used IEDs to fight American and Iraqi forces.

"Sometimes battles rage [outside] while I am chanting," Delfi says. "There is shooting and people are falling down and getting killed, but we go on recording our chanting."

Delfi steps into his small, sweltering recording studio, which, due to chronic blackouts, relies on power from a small generator. Here, he sings an a capella version of his favorite song, "Hel el Binna" or "The Strength Within."

In your name Muqtada, Baghdad is calling for your help
The Tigris has prostrated itself before you, begging for help
The Tigris came to ask for your blessing
And she blessed you with henna
We defy anyone who tries to enter Sadr City
Starting from the canal to the dam
Men confront armored vehicles with their bare chests
The Mahdi Army are heroes
They have become like mountains

When reading translations of some of these chants, it's hard not to draw parallels to the aggressive, testosterone-driven lyrics of some American rap songs: for instance, the chorus of the song "Sons of Sadr" — "We are the sons of Sadr, they know us very well. ... Don't mess with us, we are sharp as swords."

We are the sons of Sadr, they know us very well

We are the sons of Sadr on battlefields

We turn into volcanoes of anger when fighting starts

We fear no death

We head toward death

Once we are angry, difficulties will disappear

Our lives will be a cheap price for religion

He who is against us would see

Don't mess with us, we are sharp as swords

Our leader is immortal forever

Have you heard of a sheep messing with a lion?

Because we are proud of our leader forever

A sheep [Americans] can never approach a lion [Sadr]

No terrorism or the biggest al-Qaida would stop us

If only Muqtada would point with his right finger

In the face of all takfiris [impious Muslims]

As sharp as swords we will be

Holy Ali we won't be leaving the country, this is impossible

We and other sons will dismiss the occupation

"I Am the IED" by Baha el Suwaedi

I am the IED

If an armored vehicle passes, I will blow it up

If I get thirsty, I will drink blood from a Hummer

If an armored vehicle passes, it is suicidal

I will become a volcano if a soldier passes

And if a Hummer passes, I will erase it

If the IED will be added to the [rocket-propelled grenade] launcher, the battle day will be stormy

I will plant my eyes for the country

I will tighten my belt in the difficult days

Nobody can dry the Hummer blood

If the Hummer steps on me, we will reach the stars

"Taste the IED" by Ali Delfi

Taste the noble IED, taste it, taste it

Taste it and feel its pain

And see what my fire can do, taste it, taste it

From a violent Sadrist hand

Taste the new IED, taste it taste it

And then describe it to Bush [U.S. President George Bush] and his slaves

And tell him [Bush] his army and his threats

To hell, they have been issued a visa

If you see Condoleezza [Rice, U.S. Secretary of State]

Tell her that they [Sadrists] saved one for her

You have seen my strength in battle

So do not dare me, do not face me

I'm a Sadrist, and my sword never breaks

Taste it with your traitor

With the one who came with you, with your guide?

But America has no strength, it is weak