Accessibility links
Snow: Subpoenas May Lead to Less Cooperation Congress and the White House ratchet up a confrontation over eight dismissed U.S. attorneys — and how officials will testify in an inquiry of the firings. A House panel has authorized subpoenas. But White House spokesman Tony Snow says that would lead President Bush to withdraw an offer to cooperate. 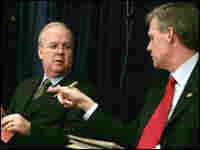 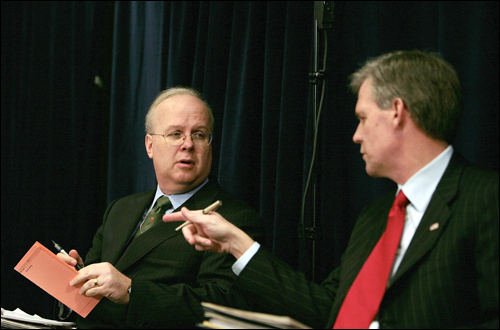 Congress and the White House are ratcheting up their confrontation over eight dismissed U.S. attorneys — and how top White House officials will testify in an inquiry of the firings. A House panel has voted to authorize subpoenas; it has not yet issued any.

But White House spokesman Tony Snow says President Bush's offer of private conversations without transcriptions is the best way to get the truth. And Snow said that if Congress issues a subpoena, the White House will withdraw its offer to cooperate.

The outcome of the House subcommittee motion to grant subpoena authority was never in doubt: Democrats outnumber Republicans on the panel.

But there was some question about how heated the debate would be. Until now, Republicans in Congress have been muted at best when they defend the Justice Department and the White House in the controversy over the U.S. attorney dismissals in 2006.

But as Rep. Chris Cannon (R-UT) noted, the Republicans met just before the hearing and got on the same page.

"The only purpose of subpoenas issued to the White House now," Cannon said, "is to fan the flames and photo ops of partisan controversy for partisan gain — tactics that impede the discovery of truth."

No subpoenas have yet been issued. And Rep. John Conyers (D-MI) said he hopes he doesn't have to use subpoenas. But he added that he has been dissatisfied with the White House's offers of cooperation.

They missed a deadline last week, and their offer to grant interviews does not allow the committee to swear people in, or transcribe their statements.

A Senate committee is scheduled to vote Thursday on whether to grant the same authorization to subpoena White House aides.

Sen. Arlen Specter (R-PA) said he would prefer voluntary testimony to subpoenas — but, he said, he thinks transcriptions are a good idea.

In a heated White House briefing, spokesman Tony Snow laid down the line: No transcripts, and no oath.

"It's an interview, these are interviews," Snow said. "What you're trying to do is create a courtroom atmosphere."

As reporters called out that the congressional panels want transcripts of their talks with White House Deputy Chief of Staff Karl Rove and other aides, Snow disputed their motives.

"Again, the question is, do they want the truth?" Snow said, "and do they think they're not going to be able to get it? And the answer is, of course they're going to get the truth, they'll get the whole truth." 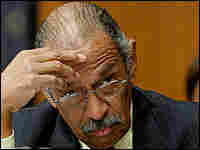 Rep. John Conyers (D-MI), chairman of the House Judiciary Committee, listens to comments at a hearing on Capitol Hill, March 21. Conyers says he plans to speak to the White House again Wednesday about having top aides testify before his committee on the firing of eight U.S. attorneys. A House Judiciary subcommittee on Wednesday voted along party lines to allow subpoenas of the White House aides. Mark Wilson/Getty Images hide caption

A House subcommittee voted Wednesday to authorize subpoenas for top White House aides, including political adviser Karl Rove, to help explain the firing of eight U.S. attorneys. The vote sets up a possible showdown with President Bush, who has vowed to fight what he called "a partisan fishing expedition."

The president has offered to make his aides available for private, off-the-record interviews. But Democratic lawmakers want Rove and others to testify in public, and under oath.

"There must be accountability," said Rep. Linda Sanchez (D-CA), who chairs the House Judiciary subcommittee on commercial and administrative law.

"One of the reasons we're in the problem is that we've all been given these closed briefings, where we have had a few members there, where they come up and say, 'Here, we've given you the complete story,'" Leahy told NPR. "And then three days later, we pick up the paper and find out all the things they left out of the story."

"I want them under oath. I want them before the whole committee," he said.

Throughout the Bush administration, the president and his advisers have jealously guarded their executive privilege, arguing that staffers wouldn't feel free to give candid advice if they had to worry about it being made public. The White House is under growing pressure, however, to explain what role it played in the decision to fire the eight federal prosecutors.

In addition to Rove, lawmakers want to question former White House Counsel Harriet Miers and her deputy, as well as Kyle Sampson, who resigned last week as chief of staff to Attorney General Alberto Gonzales.

"It is so important that six months from now, when a U.S. attorney indicts, particularly a public official, and that public official's lawyer says, 'It's politics,' that the public says, 'No, it isn't. We trust our U.S. attorneys. We trust the Justice Department.' And that trust has been shaken," Sen. Charles Schumer (D-NY) said.

Some lawmakers are still hoping for a compromise that would allow Congress and the White House to avoid a legal confrontation. Rep. John Conyers (D-MI), who chairs the full House Judiciary Committee, said after the subcommittee vote Wednesday morning that he planned to talk to the White House again later in the day.