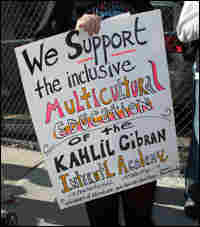 A supporter of the Khalil Gibran International Academy welcomes students on the first day of school in September 2007. Paola Messana/AFP/Getty Images hide caption

Weigh in with your thoughts on Arabic public schools.

The Khalil Gibran International Academy in Brooklyn, New York — an English-Arabic public school — provoked controversy before it even opened.

Critics described it as a madrassa headed by a radical Islamist hoping to proselytize to her students. Supporters saw the project as an educational environment for children of diverse backgrounds to learn Arabic language and culture and go onto to college as ambassadors of peace.