Accessibility links
Esperanza Spalding: Voice of the Bass There are many gifted jazz singers, and there's no shortage of accomplished acoustic bass players. But 23-year-old Esperanza Spalding's new album features both her soaring, flexible vocals and the low-end thump of her double bass. 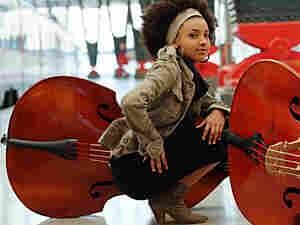 In 2005, Esperanza Spalding signed on at the Berklee College of Music as an instructor — at the age of 20. Johann Sauty hide caption

There are many gifted singers in jazz today, and no shortage of accomplished acoustic bass players. But few jazz artists can be both.

Esperanza Spalding's new album, Esperanza, blends her soaring vocals and her deep bass lines. At 23, Spalding has already built an impressive resume: She earned a full scholarship to the Berklee College of Music in Boston, and graduated a year early to become the youngest faculty member in the school's history, and she's also played with jazz legends such as Patti Austin, Pat Metheny, and Herbie Hancock.

With her outsized afro and jangly earrings, Spalding recently stopped by NPR's Washington, D.C., headquarters to speak with Michele Norris. Her musical journey began on the much smaller classical violin, but by the time she got to high school, she says was bored musically — until she had a chance encounter with an instrument much bigger than her.

"One day I went into the high school, into the high school that I went into, and the bass was just — it's kind of funny, it was kind of heavenly, you know?" she says. "I walk into this room, and it literally — it's kind of below street level, and light was shining in, and the bass was just there with no case on it, because they just bought it. And I walked into the room and picked it up and just started playing.

"And at the same time, my music teacher came in and showed me basically what a blues form was, and I just kind of started making anything up," she adds. "And pretty much from that moment, I said, 'Wow, this is — in these five minutes, I'm enjoying this music more than I have the last 10 years on the violin.'"

Spalding says that the spontaneous connection she made that day remains a formative moment for her conception of jazz today.

"That's like the vein of jazz," she says. "It's that ability to immediately be able to communicate with someone that you don't know. And in those first five minutes of this instrument that was completely foreign to me, in a way I touched right upon that vein. I mean, I hit it, I hit that nerve. Now, after nine years, everything I've learned about jazz kind of all comes back to that first realization in that room."

At the time, Spalding says she had no background in jazz — not that she didn't grow up in a musical household. She says her mother made up songs for everything, including waking her and her brother up to get to class.

"That's really beautiful," she says. "It's a shame I was so — I had such an aversion to school that I couldn't appreciate her singing."

Spalding eventually began singing herself. On Esperanza, she contrasts her higher voice with the much lower pitches of her bass playing.

"So for me, I'm kind of doing those two extremes just with one person," she says. "And it allows me to kind of lead the listener in different ways, 'cause I'm really controlling two of the most important parts of the group. In my opinion, of course."

On her new album, Spalding sings in Spanish and Portuguese, and also vocalizes in a fast, non-lyric-based style, as if she were voicing the horn melodies. Just don't call it "scat" singing.

Many older jazz fans are worried that Spalding's generation won't embrace or support the music. At 23, Spalding says she understands the concern — but also maintains faith that interest will persevere.