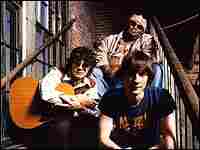 For more than a decade, the members of North Mississippi Allstars have crafted a style they call "world boogie" — a unique and energetic blend of classic Mississippi country-blues, modern rock and even hip-hop. The band performed a concert from WXPN and World Cafe Live in Philadelphia on Mar. 23.

Led by brothers Luther and Cody Dickinson, the group formed in 1996 in (surprise) northern Mississippi, where its members learned firsthand the rich blues tradition of the area from legends like R.L. Burnside and Junior Kimbrough. After honing its chops as a unit touring with larger acts, the band released 2000's Shake Hands with Shorty to widespread praise, including a Grammy nomination and a W.C. Handy Award for Best New Artist Debut.

North Mississippi Allstars' newest album, Electric Blue Watermelon, scored the group yet another Grammy nomination. With a cast of guest musicians that includes Robert Randolph and Othar Turner playing on songs both old and new, the disc finds the band once again integrating classic southern blues into modern rock and soul.