Accessibility links
An Electrified Mantra, Straight out of the '90s There's something familiar about The Ponys' "Poser Psychotic." The two guitars create a dense blare, the rhythm section throbs with low-end gristle, and singer Jered Gummere intones in a slacker drone. There's no chorus, but it's compelling nonetheless, and in ways that feel eerily recognizable.

An Electrified Mantra, Straight out of the '90s

An Electrified Mantra, Straight out of the '90s 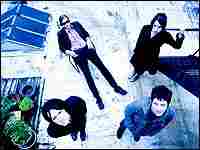 The Ponys' members would have felt at home on a Lollapalooza stage in 1993. hide caption

There's something familiar about "Poser Psychotic," one of the highlights of a new album by Chicago indie-rock band The Ponys. The two guitars create a dense blare, the rhythm section throbs with low-end gristle, and singer Jered Gummere intones in a slacker drone. The song doesn't have a chorus — it's more an electrified mantra than a traditional pop tune — but it's compelling nonetheless, and in ways that feel eerily recognizable.

Then it becomes clear: To hear it is to be transported to one of many nights spent standing in clubs in the early to mid-'90s, when countless bands crafted a mammoth, pulsating sound that took the basics of '80s indie-rock and injected musical steroids into them. Of course, it wasn't often called "indie rock" back then; the term was "alternative rock." It's easy to imagine "Poser Psychotic" blaring from a stage on one of the early Lollapalooza tours, The Ponys sandwiched between, say, Eleventh Dream Day and Hole.

If such a song had been released five years ago, it would have seemed like a pointless rehash. At this particular moment, though, it feels strangely, wonderfully refreshing. After all, the new wave of upstart godheads does its best to avoid the cliches of the genre — see: The Arcade Fire, The Hold Steady, et al — and create something grander. But these bands can also come off as self-conscious in the process: The effort is palpable. The Ponys' members don't seem encumbered by concerns about whether music bloggers will love or hate them. They simply want to kick out the indie-rock (um, alt-rock) jams, and to make fans stand with their hands in their front pockets and nod their heads, just like in the old days.

Album
Turn the Lights Out
Artist
The Ponys