Accessibility links
'Caspian' Recaptures Galloping Magic of 'Narnia' Morning Edition and Los Angeles Times critic Kenneth Turan reviews The Chronicles of Narnia: Prince Caspian, the second installment of the fantasy series by C.S. Lewis to be adapted into a film.

Morning Edition and Los Angeles Times critic Kenneth Turan reviews The Chronicles of Narnia: Prince Caspian, the second installment of the fantasy series by C.S. Lewis to be adapted into a film.

The big new movie this weekend is "The Chronicles of Narnia: Prince Caspian." It's the second film based on C.S. Lewis's fantasy premise of ordinary kids being kings and queens in an alternate universe. MORNING EDITION and Los Angeles Times critic Kenneth Turan has a review.

KENNETH TURAN: Things never happen the same way twice, Aslan the all-powerful says in "The Chronicles of Narnia: Prince Caspian." While the lion king is referring to the ways of the world, he might be talking about this film as well.

"Prince Caspian" retains the kid-friendly PG rating of the previous episode. But this film is noticeably darker in tone. It begins with the piercing scream of a woman in childbirth, and it dwells on the ruthlessness of its villain, the evil Miraz. When Miraz threatens Prince Caspian, he blows on a magic horn to summon the four siblings from the last film.

The kids are back in London, mired in their tedious everyday lives and dreaming of Narnia. Who wouldn't be?

TURAN: The new movie features two long and elaborate battle set pieces that taken together make up a big chunk of its two hour and eighteen minute length.

Made with a cast and crew of close to 2,000, and some of the best special effects houses in the world, this is the kind of adventure epic that believes you can never have too much galloping.

TURAN: Not a drop of blood is shed in all those battles - this is PG, after all. There is even a youthful kiss for sister Susan that's so innocent that even Miley Cyrus wouldn't have to apologize for it. "Prince Caspian" is squarely in the tradition of the kind of teenage movies the Disney organization used to make before teens discovered horror and gore.

Things may not happen the same way twice, but they can get awfully close. 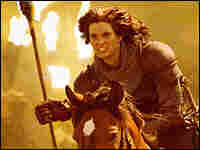 Prince Caspian (Ben Barnes) is the rightful heir to the throne of Narnia, but he lives in exile for fear of an evil general — at least until the Pevensie children pop back through the wardrobe. Murray Close hide caption 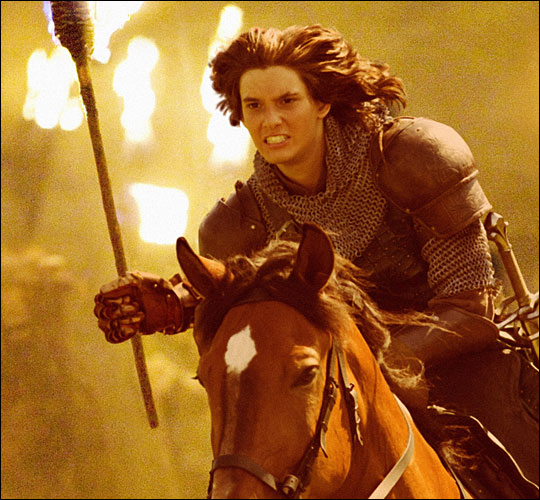 Prince Caspian (Ben Barnes) is the rightful heir to the throne of Narnia, but he lives in exile for fear of an evil general — at least until the Pevensie children pop back through the wardrobe.

'I Believe You Called?'

'A Simple Thank-You Would Suffice'

Assault on the Castle

For the Pevensie kids, it's been just a year since they popped into that wardrobe and down the rabbit hole or whatever. But in Narnia, some 1,300 years have passed, and the critters and dwarfs of the forest need their services again. So does Prince Caspian, who's in danger of being killed by an uncle who wants ... oh, never mind.

Suffice it to say that C.S. Lewis' epic riff on Christian mythology, replete with centaurs, minotaurs, fauns, witches and all manner of medieval costuming, continues to offer employment to Hollywood's special-effects wizards; that director Andrew Adamson has gotten a trifle more creative in staging live-action battles; and that the story's a tad darker and less fairytale-ish this time.

The title character — an adolescent in the book, played by 26-year-old Ben Barnes with an on-again-off-again Spanish accent and no discernible personality — will most likely be a disappointment to anyone not already swooning over his image on the movie poster.

A few physically small characters make bigger impressions: Peter Dinklage as an appealingly cranky dwarf named Trumpkin; Eddie Izzard voicing a mouse named Reepicheep. (The latter fills the Puss-in-Boots slot amusingly, reminding you that Adamson is also the guy behind Shrek's "cameras.") And let's not forget little Georgie Henley, whose Lucy Pevensie is still a reliable scene stealer — especially when she's on-screen with Aslan, the fluffy leonine Christ stand-in that only she seems inclined to turn to in times of crisis.

As fantastical film worlds go, Prince Caspian's at least keeps twee at bay. That said, if your tolerance for self-righteous crusading teenagers is itself less than fantastical, the 147-minute running time should give you pause.