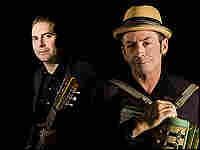 Chris Gaffney, vocalist and accordion player for the Hacienda Brothers, died last week from liver cancer at the age of 57.

In this 2006 Fresh Air interview, Gaffney and bandmate Dave Gonzalez discuss the origins of the band's "western soul" sound, which blends country and soul music, and Gaffney reveals his short stint as a boxer.

This interview originally aired on December 5, 2006.