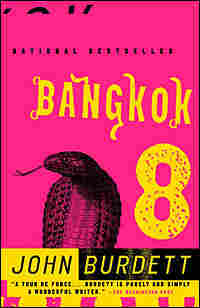 The African American marine in the gray Mercedes will soon die of bites from Naja siamensis, but we don't know that yet, Pichai and I (the future is impenetrable, says the Buddha). We are one car behind him at the toll for the expressway from the airport to the city and this is the closest we've been for more than three hours. I watch and admire as a huge black hand with a heavy gold signet ring on the index finger extends from the window, a hundred-baht note clipped stylishly between the pinkie and what our fortune tellers call the finger of the sun. The masked woman in the booth takes the note, hands him the change and nods in recognition at something he says to her, probably in very bad Thai. I tell Pichai that only a certain kind of American farang attempts conversation with toll booth operators. Pichai grunts and slides down in his seat for a nap. Survey after survey has shown sleep to be my people's favorite hobby.

"He's picked someone up, a girl," I mutter casually, as if this were not a shocking piece of news and clear proof of our incompetence. Pichai opens one eye, then the other, raises himself and stretches his neck just as the Mercedes hatchback races away like a thoroughbred.

"I bet you know who designed the black top?"

"It's a fake Armani. At least, Armani was the first to come out with the black semi–tank top with bootlace straps, there have been plenty of imitators since."

Pichai shakes his head. "You really know your threads. He must have picked her up at the airport, when we lost him for that half hour."

I say nothing as Pichai, my soul brother and partner in indolence, returns to his slumbers. Perhaps he is not sleeping, perhaps he is meditating. He is one of those who have had enough of the world. His disgust has driven him to ordain and he has named me as the one who, along with his mother, will shave his head and eyebrows, which honor will permit us to fly to one of the Buddha heavens by clinging to his saffron robes at the moment of death. You see how entrenched is cronyism in our ancient culture.

In truth there is something mesmeric about the black marine's head-and-shoulder set which has consumed all my attention. At the beginning of the surveillance I watched him get out of his car at a gas station: he is a perfectly formed giant and this perfection has fascinated me for three hours, as if he were some kind of black Buddha, the Perfect Man, of whom the rest of us are merely scale models with ugly flaws. Now that I have finally noticed her, his whore looks erotically fragile beside him, as if he might crush her inadvertently like a grape against the palate, to her eternal and ecstatic gratitude (you see why I am not suitable for monkhood).

By the time I have inched up to the toll booth in our dying Toyota, he has flown to who knows what celestial bed of pleasure in his late-model Garuda.

I say to my beloved Pichai, "We've lost him," but Pichai also has flown, leaving only his uninhabited corpse, which snores in the seat beside me.

Naja siamensis is the most magnificent of our spitting cobras and might be our national mascot, for its qualities of beauty, charm, stealth and lethal bite. Naja, by the way, is from the Sanskrit, and a reference to the great Naja spirit of the earth who protected our Lord Buddha during a dreadful storm in the forest where he meditated.

The elevated expressway is the only road in the city where a Mercedes E series can outrun a Toyota Echo, and I drive without hope or haste (which comes from the devil; slowness comes from Buddha), just for form, feeling out of place amongst the elite vehicles whose owners can afford the toll: Mercs and BMWs, Japanese four-by-fours, plus a lot of taxis with farangs in the back. We fly above the brothel-hotels of the Nana district before I take a slip road into the primeval jam below.

Nobody jams like us. On Sukhumvit at the junction with Soi 4 the traffic is solid in four directions. There is a sentry box here for the traffic cops who are supposed to deal with the problem, but how do two underpaid cops move a million cars packed like mangoes for export? The cops are asleep behind their glass and the drivers have given up honking their horns. It is too hot and humid to honk. I spy our guns and holsters in a tangle at Pichai's feet, along with the radio and the portable siren to clamp on the roof when we finally go into action. I nudge Pichai.

"Better call him, tell him we lost the mark."

Pichai already has the monkish capacity to hear and understand whilst asleep. He groans, passes a hand through the condemned jet-black locks which I have always envied and bends double to retrieve the Korean short-wave radio. An exchange of static and the unsurprising intelligence that Police Colonel Vikorn, chief of District 8, cannot be located.

"Call him on his mobile."

Pichai fishes his own mobile out of a pocket and presses the autodial button. He speaks to our Colonel in terms too respectful for modern English to carry (somewhere between "sire" and "my lord"), listens for a moment, then slips the Nokia back in his pocket. "He's going to ask Traffic to cooperate. If the black farang shows up, Traffic will call us on the radio." I turn up the air-conditioning and wind the seat back. I try to practice the insight meditation I learned long ago in my teens and have practiced intermittently ever since. The trick is to catch the aggregates as they speed through the mind without grasping them. Every thought is a hook, and if we can only avoid those hooks we might achieve nirvana in one or two lifetimes, instead of this endless torture of incarnation after incarnation. I am interrupted by more static from the radio (I register static, static, static before emerging from the meditation). Black farang in gray Mercedes reported stopped at Dao Phrya, on the slip road under the bridge. Pichai calls the Colonel, who authorizes the siren.

I wait while Pichai slips out of the car, clamps the siren to the roof, where it flashes and wails to no effect on the gridlock, and walks over to the sentry box, where the traffic cops are dozing. At the same time he is strapping on his holster and gun and reaching in his pocket for his police ID. A more advanced soul than I, he gives no sign of the disgust he feels at being trapped in this pollution called life on earth. He would not wish to poison anyone else's mind. Nevertheless, he smacks his hand somewhat violently against the glass of the sentry box and yells at them to wake the fuck up. Smiles and a gentlemanly discussion before the boys in donkey brown (the uniform can appear bottle green in some lights) emerge to take charge. They come up to me in the car and there is the usual double-take when they see what I am. The Vietnam War left plenty of half-castes in Krung Thep, but few of us turned into cops.

There are several inches of slack within which every car can shunt, and our colleagues show considerable skill and cunning in making a space. In no time at all I am able to drive up onto the sidewalk, where the siren terrorizes the pedestrians. Pichai grins. I am skilled at very dangerous driving from the days when we used to take drugs and steal cars together, a golden age which came to an end when Pichai murdered our yaa baa dealer and we had to seek refuge in the Three Jewels of the Buddha, the dharma and the sangha. There will be time in this chronicle to explain yaa baa.

While I practice close encounters with cooked-food stalls, sex traders and oncoming traffic, wheel spins, split-second lurches and even one hand-brake spin, I try to remember what Dao Phrya Bridge is famous for. Why have I heard of it at all?

We are very happy. Sabai means feeling good and sanuk means having fun. We are both as we race toward the bridge in demonic haste, with Pichai chanting in Pali, the ancient language of the Gautama Buddha, for protection from accidents. He asks also of the Buddhist saints that we do not accidentally kill anyone who does not deserve it, a touchy point with Pichai.

Krung Thep means City of Angels, but we are happy to call it Bangkok if it helps to separate a farang from his money.

Excerpted from Bangkok 8 by John Burdett. Copyright © 2003 by John Burdett. Excerpted by permission of Vintage, a division of Random House, Inc. All rights reserved. No part of this excerpt may be reproduced or reprinted without permission in writing from the publisher. 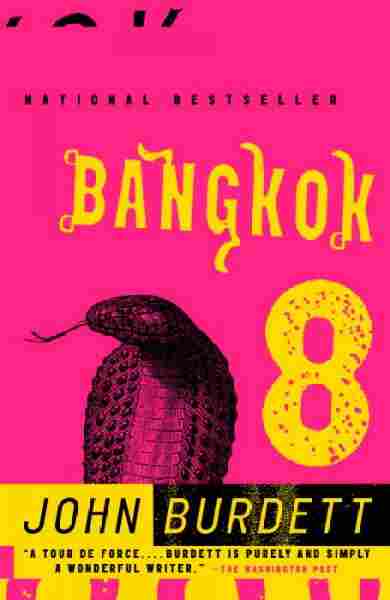