Accessibility links
Afghans Frustrated by Slow Pace of Development Since the Taliban was ousted in 2001, billions of dollars in foreign aid have poured into Afghanistan. Yet despite progress in cities such as Kabul, much of the country looks the same today as it did seven years ago — and many Afghans feel helpless. 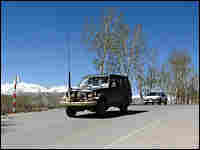 Of all the roads in Afghanistan's mountainous Bamiyan province, only one mile is paved. Roads are one of the country's greatest development challenges. Soraya Sarhaddi Nelson/NPR hide caption 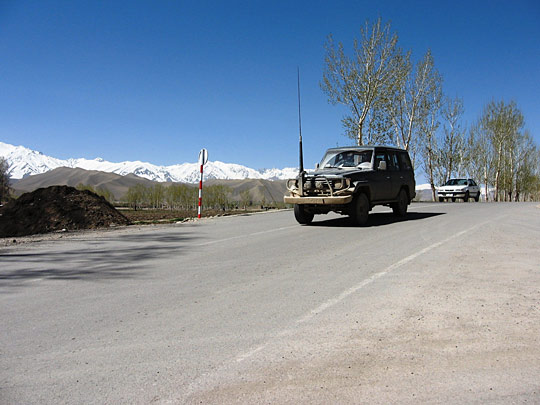 Of all the roads in Afghanistan's mountainous Bamiyan province, only one mile is paved. Roads are one of the country's greatest development challenges. 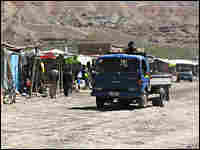 Most of the roads in Bamiyan province resemble this bumpy "rock carpet" road — which is the main thoroughfare in Bamiyan city. Soraya Sarhaddi Nelson/NPR hide caption 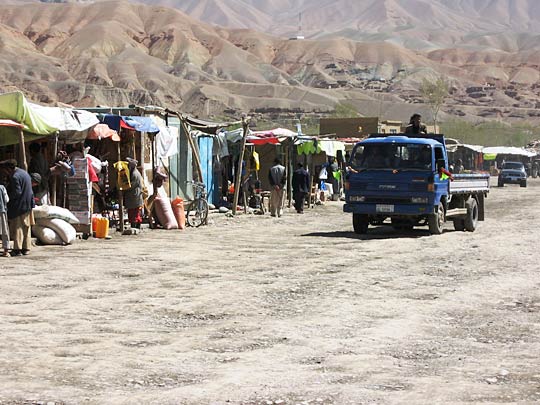 Most of the roads in Bamiyan province resemble this bumpy "rock carpet" road — which is the main thoroughfare in Bamiyan city. 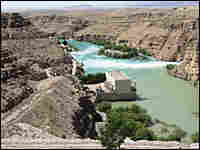 U.S. engineers are trying to rebuild Kajaki dam in the southern province of Helmand. The repair work was suspended for months because of Taliban attacks. It has since resumed, but it will take more than a year at the least to finish. Soraya Sarhaddi Nelson/NPR hide caption 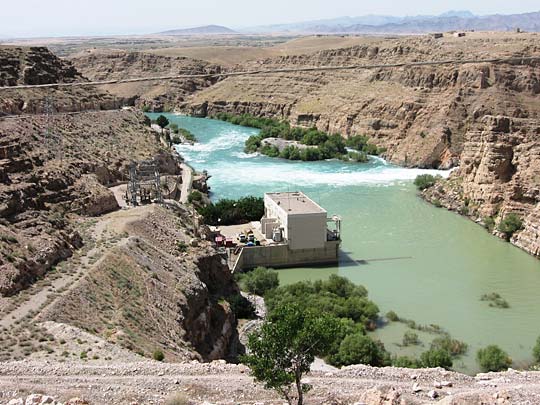 U.S. engineers are trying to rebuild Kajaki dam in the southern province of Helmand. The repair work was suspended for months because of Taliban attacks. It has since resumed, but it will take more than a year at the least to finish.

Afghan Gov. Arsala Jamal is in a bind. He wants to build a gate between two walled compounds that house a girls' school in Khost, Afghanistan. That way, the girls won't need to walk outside and risk attack in this volatile province southeast of Kabul.

In America, Jamal might pick up the phone and call the school board to provide funds for the gate. But in Afghanistan, he is forced to go hat in hand to a local American military team.

Jamal's predicament illustrates just one of the myriad challenges of rebuilding Afghanistan. Billions in foreign aid have poured into the country since the Taliban fell in 2001, and yet much of the country has not seen any improvement since then. And Afghans' frustration over the pace of development is growing.

In the case of the girls' school, Jamal invites Navy Cmdr. Erika Sauer to the school. She is the new commander of the U.S. provincial reconstruction team, or PRT. A bit nervous, Jamal eventually asks Sauer if the U.S. can provide the needed gate.

Jamal says he is embarrassed to have to ask Sauer for something so simple. But he says he has no choice, since his own government doesn't give him a single dollar for development. Nor does anyone else.

He adds that getting funds for the gate from the Afghan Education Ministry in Kabul would take years. "We have a long way to go," he says.

Still, this province is one of the luckier ones. Khost, a former Taliban stronghold that for a time was home to Osama bin Laden, is booming with American construction.

Roads are being paved. Government centers are springing up, even in remote areas along the border with Pakistan. Fifty-three schools will be built in Khost this year. The United Arab Emirates also funded a sprawling new university campus here.

A couple hundred miles to the north, Habiba Surabi envies the attention Khost gets.

Surabi says many of the children in Bamiyan still attend school outdoors — in tents, if they are lucky.

Of the roads that crisscross this mountainous province, only one mile is paved. Work on connecting Surabi's province to Kabul via neighboring Wardak province is going nowhere.

Surabi says Khost is supposed to get a $60 million road connecting it to neighboring Paktia province — and that it will take only 18 months to build.

It will take three years to build the road running from Bamiyan through Wardak, the Bamiyan governor says. She also says that despite promises from the Ministry of Public Works that construction would begin on the Bamiyan side, "we didn't see anything."

Based on three months of interviews with people ranging from ministers in Kabul to villagers living in remote areas, it's clear this type of frustration is rampant across Afghanistan. Everyone knows money is pouring in. The United States alone has pledged $6 billion in aid here since 2002.

But the problem, Afghans say, is that too many people are making decisions on how and where the money should be spent: donor countries, nongovernmental organizations, even foreign nations' militaries. Some consult with the government in Kabul; others, with local leaders. But there's not enough coordination.

No one here or abroad can say with certainty what all the projects in Afghanistan are or where they are or how much money has been spent. Even Afghan ministries don't share information with each other and are widely accused of corruption.

But Afghan officials' biggest beef seems to be with foreign donors. Officials in Kabul complain that they have had too little say in where foreign aid goes — even though the government's ability to handle that aid has grown exponentially in recent years.

Mohammad Ehsan Zia is head of the Ministry of Rural Rehabilitation and Development. He estimates only a quarter of the aid coming into Afghanistan is channeled through his government.

"The problem is that we need to take the people of Afghanistan into confidence, and the only entity that can take people into confidence is their government," he says.

And the lack of Afghans' confidence in their government is growing.

'It Doesn't Pay to Be Peaceful'

Sayed Muzafar owns a small construction supplies shop in Bamiyan city. He says parliament members and ministers visit, with promises of electricity and roads, but "nothing comes of it."

"Maybe it's that we're the wrong tribe or that we don't have terrorists destroying everything. It doesn't pay to be peaceful," he says.

That sentiment worries Surabi, the governor of Bamiyan, who fears her people might be driven to civil unrest if things don't change. She says it is hard not to feel angry when they see where the aid goes.

Much of the foreign development is concentrated in war-torn areas in the south. The contracts are often granted to foreign companies, who in turn subcontract with other foreign or Afghan builders.

Yet such projects often languish because it's too unsafe to work.

Take, for instance, Kajaki dam in the southern province of Helmand. American engineers are trying to rebuild the half-century-old, U.S.-built dam and power plant in the heart of Taliban country. The $16 million project would provide power to more than 1 million households.

But the repair work was suspended for months because of Taliban attacks. It has since resumed, but the engineers say it will take more than a year to finish — if there are no further delays.

Mohammad Hashim Mayar worries that time is running out to get the development strategy right. He is deputy director of the Agency Coordinating Body for Afghan Relief, a nongovernmental organization in Kabul that drafted a recent report about problems with foreign aid here.

Mayar says it is clear Afghans are impatient.

"Have these constructions changed the life of poor people? No. Seventy-five percent of our people are living in ... the rural areas. Little work has been done for them," he says.

Government ministers in Kabul say they are working to change that. They hope to gain more control over foreign aid with a five-year strategy they will unveil to donors at a conference in Paris in June.

Amid War, Afghanistan Builds Its First National Park May 7, 2008