Accessibility links
Westerners Play Pivotal Role in Afghan Rebuilding Governmental, nongovernmental and military groups from the U.S. and other Western countries are part of the considerable efforts to reconstruct war-torn Afghanistan. But critics are debating what the best way is for them to help. 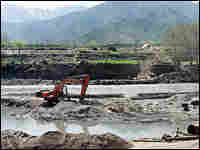 A U.S. military-backed provincial reconstruction team is helping build two bridges in Afghanistan's Kunar province, which is located northeast of the capital of Kabul along the Pakistani border. Soraya Sarhaddi Nelson/NPR hide caption 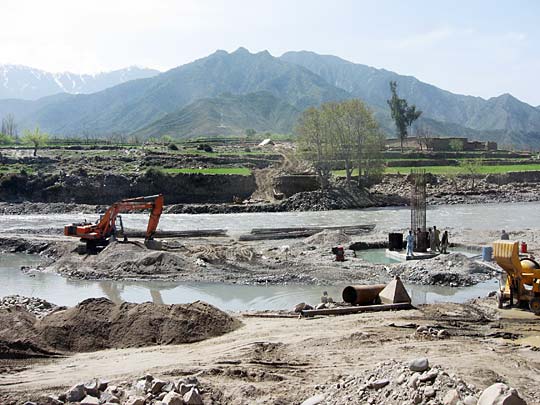 A U.S. military-backed provincial reconstruction team is helping build two bridges in Afghanistan's Kunar province, which is located northeast of the capital of Kabul along the Pakistani border. 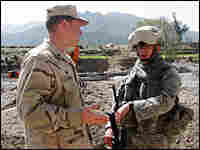 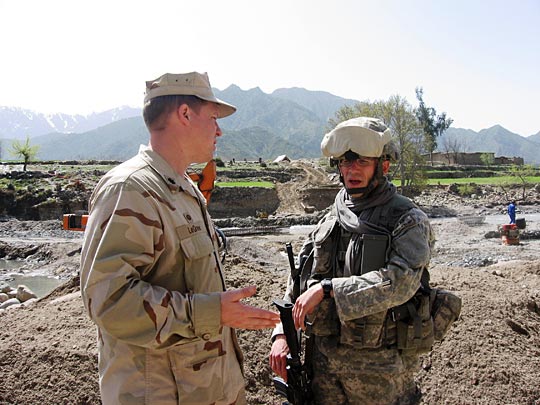 Navy Cmdr. Larry Legree (left) discusses the bridge projects with Lt. Matt Myers. Until recently, the two were members of the U.S. provincial reconstruction team, or PRT, in Kunar province. 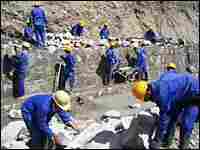 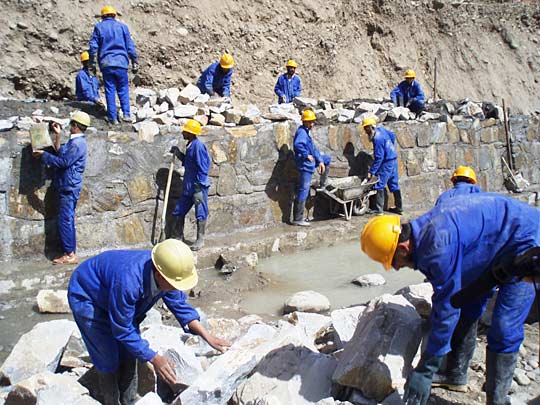 He didn't do it with guns. Instead, Legree, former head of Kunar's provincial reconstruction team, used development to undermine insurgents and win over residents.

Take, for instance, two bridges being built across the Kunar River.

Legree says once completed, the bridges will connect residents of this isolated part of the province along Pakistan's border with the rest of Afghanistan — and that the bridges will trigger a chain reaction.

"We've seen it everywhere else. Once we build roads through these valleys and we build bridges that connect population areas, economics just go through the roof," Legree says.

Once people are living above bare subsistence — where they are susceptible to Taliban influences — they begin to care about "starting a small business, selling excess commodities and getting to secondary and tertiary markets," he says.

The projects also provide badly needed employment in Kunar. Plus, workers earn the equivalent of $5 a day, a decent salary by local standards.

The Military and Development

The Kunar provincial reconstruction team, or PRT, is one of about two dozen in Afghanistan, mostly run by officers from NATO countries in far-flung provinces. They are the face of Western development aid for millions of Afghans.

Nowadays, these teams work closely with local Afghan leaders, letting them propose and vet projects, which the military then reviews and funds.

Since the ouster of the Taliban in 2001, the country has received billions in foreign aid. But many challenges face those trying to rebuild the war-torn country — including the many Westerners involved in the effort.

For example, the PRTs have many Western critics who argue the military shouldn't be in the development business. They say experienced civilian agencies are better equipped for the job.

And unlike the military teams, civilians don't leave Afghans with the impression that foreign soldiers are in charge.

The military counters that civilian aid organizations refuse to go to unsafe areas where the PRTs are.

The Kunar team regularly fires its howitzer at insurgent positions in the Korengal Valley several miles away.

The militants, with local help, make Kunar one of the more dangerous places for U.S. troops in Afghanistan — even though the Americans are pouring hundreds of millions of dollars into developing this province.

"We can't have governance, we can't have security, if people can't move around their own backyard," Dwyer says.

Spending vastly more than the PRTs on reconstruction is the U.S. Agency for International Development, which tackles long-term projects, many of them in dangerous areas.

One example is Afghanistan's "ring road," which is to be finished next year. It's a paved beltway designed to connect key Afghan cities to each other and neighboring countries.

Yet many Afghan officials grumble that USAID does not consult with them enough on projects or contracts. They say America may be the country that donates the most money to Afghanistan, but it is also the one that gives Afghans the least control.

U.S. officials argue that there hasn't been anyone for them to turn the projects over to, that the Afghan government needs to develop more capacity, and that corruption is too rampant for the agency to simply hand over the pot of money.

Susan de Camp is the U.S. agency's representative in Khost province, southeast of Kabul. She notes that USAID has a "tremendous responsibility."

"[USAID] is the development arm of the U.S. government. And accountability is first and foremost. Failure is not an option. One bad project and your whole reputation is down the tubes. ... It doesn't matter if you have 500 projects out there," de Camp says.

She and others say strict accounting standards and a dearth of qualified Afghan companies have led the U.S. agency to hire foreign contractors to do much of the work. The for-profit companies, in turn, subcontract with regional or local laborers to build the projects.

Many people involved in aid work here criticize that approach. One controversial report released this year by Oxfam, a leading British charity, accused the Americans of wasting development money.

Anja de Beer heads the Agency Coordinating Body for Afghan Relief, a nongovernmental organization in Kabul that provided the research for the report.

De Beer notes that a large portion of USAID money goes to big for-profit companies — which results in much of the money going back to the donor country through profits, consultant salaries, and procurement regulations under which materials are not necessarily purchased in Afghanistan.

Many donors have rejected the report's findings, accusing the authors of using faulty numbers and wanting more development money for their own agencies. They also preach patience to Afghans, saying that building their country from the ground up takes time.

Christopher Dell, the deputy chief of mission at the U.S. Embassy in Kabul, says people tend to forget how bad conditions were in the past.

He points to the fact that in 2001, Afghanistan had only 15 phone lines that could call the outside world. Now, the country has several million mobile phone subscribers who can call anywhere.

Nonetheless, the newly arrived United Nations special envoy, Kai Eide, says it would be wrong to ignore the Oxfam report.

He says the report "pointed the finger at exactly the right problems: how do we manage to spend our money better, how can we leave more money in this country, how can we develop Afghan capabilities better because they have to be developed if our efforts are to be sustainable?"

Some of those answers may come at a conference in Paris next month. There, the Afghan government is planning to ask donors for $50 billion to implement its first nationwide strategy for development.