Accessibility links
Huang Shi's 'Children,' Orphaned Again Onscreen A British journalist, an American nurse and a Chinese partisan join forces to protect 60 orphaned children in war-torn 1930s China. Roger Spottiswoode's movie is inspired by a true story — but itself turns out to be thoroughly uninspired. 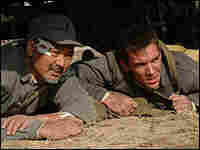 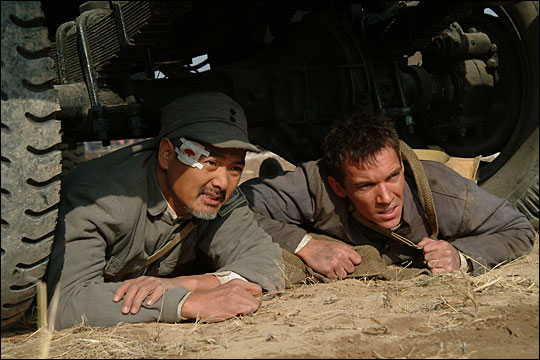 There's almost certainly an engaging story in the true-life tale of George Hogg, an Associated Press reporter who got caught up in the 1937 Japanese invasion of China, witnessed serial atrocities and did everything he could to save an orphanage full of children. Alas, director Roger Spottiswoode hasn't found it.

Or rather, he's sketched its outlines, then filled them in ineptly enough to make the story crashingly dull — quite an accomplishment, considering that it involves sandstorms, blizzards, a 600-mile trek on the Silk Road through occupied China and battles involving communists (led by Chow Yun-Fat), nationalists and the Japanese.

There's even a late-blooming love story between Hogg (Jonathan Rhys Meyers) and an Australian doctor (Radha Mitchell). Perhaps embarrassed by the film's dialogue — or by the fact that this is yet another Westerners-saving-helpless- Easterners-from-barbarism tale — those last two sound as if they're delivering even their English lines phonetically.

Pretty cinematography is a plus, but there's hardly a moment of suspense, or believable drama, despite the based-on-truth pedigree. An end-credits sequence, with documentary-style interviews with the aged survivors of the real orphanage, packs more punch in five minutes than the rest of the film manages in almost two hours.