Lives, and Plots, Tangled at 'The Edge of Heaven'

Lives, and Plots, Tangled at 'The Edge of Heaven' 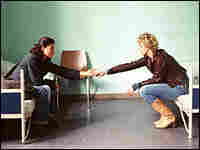 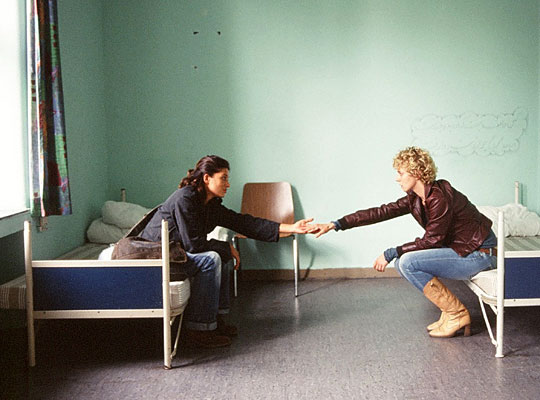 A stretch, but a touching one: Turkish refugee Ayten (Nurgul Yesilcay, left) finds a protector — and more — in Patrycia Ziolkowska's Charlotte.

Lives, nations and worldviews intersect in The Edge of Heaven, a complex and fascinating drama that traffics in intriguing coincidences and breathtaking near misses.

An intimate portrait of six people — four from Turkey, two from Germany — the film is also a metaphor for the generational, religious and political tensions that arise as a largely Islamic society prepares to join the European Union. The story begins in Germany, with an encounter between a Turkish prostitute and an elderly Turkish customer; both have adult children, and after they grow briefly closer and tragedy strikes, his son travels to Turkey to find her daughter — unaware that the daughter, fleeing political difficulties, is already on her way to Germany.

Two other women will become enmeshed in the drama in ways I shouldn't reveal. Let's just say that ties and connections surface everywhere, and once immigration authorities get involved, so do Catch-22s.

Writer-director Fatih Akin gets delicately shaded performances from a cast that includes Turkish national treasure Tuncel Kurtiz and Hannah Schygulla, who's radiant in a more matronly way than she was in those Fassbinder films that made her an icon of German cinema in the '70s and '80s.

The Edge of Heaven takes a jaundiced view of political institutions, and it's pessimistic about fate. But the filmmaker finds so many grace notes in the humanity of his characters that despite the parade of unlikely coincidences that drive the film, it ends up feeling fiercely real.