Accessibility links
With Indy in His 'Kingdom,' What Could Go Wrong? Filmdom's favorite archaeologist is back — this time facing Russian spies and legions of Mayans. Like the earlier Raiders sequels, this one's inventively conceived, capably managed and amusing enough to please those already hooked.

Listen
With Indy in His 'Kingdom,' What Could Go Wrong? 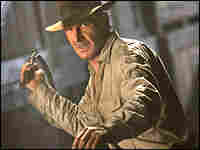 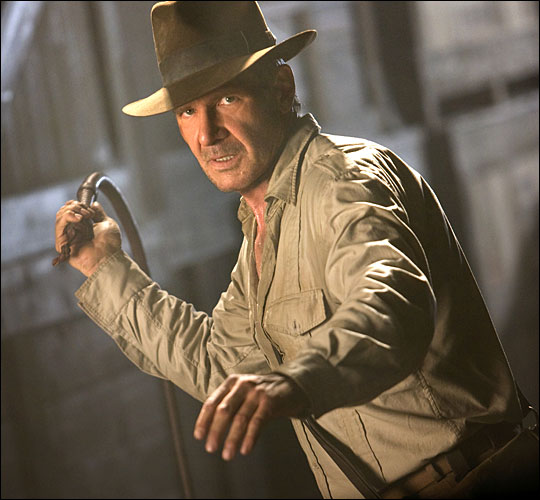 Crack addict: Indiana Jones (Harrison Ford) may be older, but his taste for thrills makes you wonder if he's wiser. 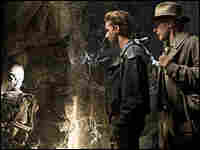 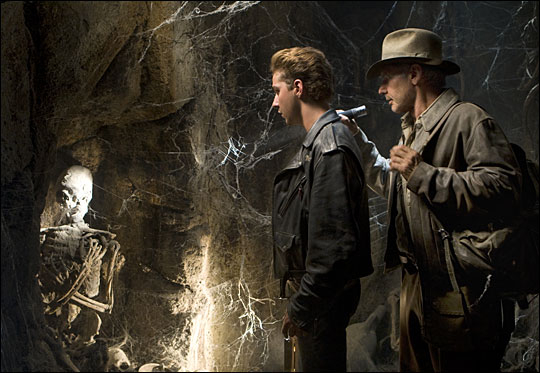 The son also rises: Mutt Williams (Shia LaBeouf) is Indy's new sidekick — a Harley-riding greaser who seems to have inherited a jones for adventure.

Once upon a time, there was a hero named Indiana Jones, who tracked down a Lost Ark, conquered a Temple of Doom and went on a Last Crusade to find the Holy Grail. Now, nearly a generation after all that, he's off to the Kingdom of the Crystal Skull.

It's the Cold War '50s, not the pre-war '30s, and just to make that clear, director Steven Spielberg puts Elvis Presley on the soundtrack, a hot rod in the desert and a slightly grizzled Harrison Ford in Indy's fedora.

Grizzled but still agile, let's note. In his first 20 minutes on screen, Dr. Jones — he's an archaeologist-professor, remember — survives a free-form drag race, a shootout, a battle of wits, a magnetized shootout, a swing through the roof-rafters of notorious Hanger 51 and a skin-blistering jet-train ride across the desert.

And an atomic blast.

Having returned with a suitable bang, he can finally take a moment to acquaint both the audience — and a motorcycle-riding, leather-jacketed sidekick named Mutt — with a few plot details.

"Legend says that a crystal skull was stolen from a mythical lost city in the Amazon," he explains. "Supposedly built out of solid gold, guarded by the living dead. Whoever returns the skull to the city temple will be given control over its power."

So the old grave-robber's going to return something, eh? Well, isn't that enlightened. Actually, who cares why Indy is doing anything, as long as he does it at high speed — and at enormous peril to everyone concerned?

It's family-friendly peril, of course: Spielberg may be the only filmmaker around who, after a character is saved by stuffing himself into a refrigerator, would dispatch another character to say, "Don't you know climbing into refrigerators is dangerous?" Gotta love him for that.

And for getting Shia LaBeouf to stop playing with Transformers and start mimicking Brando in The Wild One, for encouraging Cate Blanchett to make her Russian agent a sort of proto-Bond Girl, and especially for bringing back Karen Allen, still as spunky and radiant as she was in Raiders of the Lost Ark.

All of this as they traipse off to have Close Encounters of the Rube Goldberg Kind in a temple where towers snap together, doors pull apart and staircases retract into walls at the very sight of a bullwhip. With Spielberg preferring real stunts over digital ones, it must've been great fun to film all this.

If it's a bit less fun to watch, well, expecting Indy's derring-do to have the urgency of what he derring-did almost 30 years ago may just be wishful thinking. Particularly considering the form of these movies, which are themselves a little like Rube Goldberg contraptions — all gears and stunts and plot points clicking preposterously into place. This time, the clicking seems more efficient than joyous, but Kingdom of the Crystal Skull is not unlike the other two Raiders sequels: It's inventively conceived, capably managed and amusing enough to please the folks — and this includes legions — who are already hooked.