Accessibility links
Albert Ayler's Fiery Sax, Now on Film In the 1960s, the renegade saxophonist took children's songs, march melodies and gospel hymns and made them into powerful free improvisations. Now, he's being embraced by a generation of rock fans — and explored in a recent documentary. 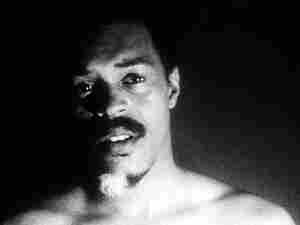 Director Kasper Collin was compelled to create a film about Albert Ayler after seeing this image of the saxophonist. Michael Snow hide caption

He was a modest man with a wild saxophone style that exploded children's songs, march melodies and gospel hymns into dense improvisations that foresaw the hardcore, noise, and experimental rock styles of today. In fact, a new generation of primarily rock fans is discovering Ayler's music, thanks in large part to reissues of his original recordings, as well as several tribute albums and a recent documentary.

Ayler's 1963 debut album is titled My Name Is Albert Ayler. It's also the title of a recent Swedish documentary on the firebrand saxophonist.

The film's director, Kasper Collin, thought there was a good story in the black American's apprenticeship touring Sweden with conventional dance bands in 1962, the confusion his intense originality prompted from musicians and listeners alike, and his triumphant return as a headliner with the touring Newport Jazz Festival in 1966.

But Collin was unsure of how to create a portrait of a musician found floating in New York's East River, evidently a suicide, just four years later. Then he discovered some extraordinary footage.

"That is the beautiful shot of Albert naked from his chest and up — it's like a 30-40 seconds long shot, but he's just looking into the camera, and he has beautiful, burning eyes," Collin says. "It was very, very moving. So I kind of decided then, if this is the only footage, we [can] try to make at least a small film."

Instead of a small film, Collin persisted in his research and came up with a 79-minute movie. He interviewed Ayler's Swedish colleagues and girlfriend; he tracked down his American collaborators, including drummer Sunny Murray and bassist Gary Peacock; and he eventually traveled to Cleveland to meet Ayler's then-89-year-old father and his surviving brother.

The film My Name Is Albert Ayler depicts a man of pure vision and aesthetic daring. Mostly misunderstood in the jazz world, he evoked both pride and despair in his family and friends.

"I was living pure frustration, like a madman, like a madman," Ayler once said. "I was up in my room when I went to Cleveland, playing, and I was beating like this on the floor. Then I go downstairs; my mother said to me, 'I don't think you're my child. When I was in the hospital, the man must have made a mistake and given me the wrong baby.' Made me cry. I cried, but I thought, I said, 'Hmm. Nobody understands what music — what I'm trying to do,' and I'm trying to understand it and it was, like, [a] very shaky situation."

Ayler's mix of ingenuous simplicity and improvisational fervor has found a large corps of devoted fans. Marc Ribot, one of the most acclaimed progressive guitarists on the New York scene, comes out of a rock, rhythm-and-blues, and "no wave" background. He asserts that Ayler's language is a jazz beyond jazz.

"The chord language of his compositions goes between the tonal language of spirituals, of military marches and occasionally the blues," Ribot says. "It goes between there and pretty dense atonality without ever stopping in between at bebop, let's say."

Ribot put together a band called Spiritual Unity — named after one of Ayler's albums — to celebrate and transform Ayler's music. Vinny Golia, a composer and multi-instrumentalist at the hub of the Los Angeles post-jazz scene, is one of the voices on another tribute album, Healing Force: The Songs of Albert Ayler.

Golia was a painter, not a musician, when he first heard Albert Ayler in Greenwich Village in the late 1960s. He, too, says that Ayler's music has the energy of punk and gospel.

"That just sweeps over you, that energy," Golia says. "You don't care if they're playing two chords or what; you know, it's just the energy and commitment to playing that way.

"That music can lift you up, but there's a point where you become fatigued, and if you can break through that little wall, your listening opens up into this other level, and it really becomes quite astounding," Golia says. "You start to hear the logic, just the intent of the person playing. And so that lifts you to this other place, which I find is ... man, you know, it's quite exhilarating."

For most of his career, Ayler was shunned, ridiculed, or ignored by the general public. But, as he says in a 1964 interview, he was certain about what he was doing.

"The music that we're playing now is just a different kind of blues," Ayler said. "It's the real blues, it's the new blues, and the people must listen to this music, because they'll be hearing it all the time. Because if it's not me, it'll be somebody else that's playing it. Because this is the only way that's left for the musicians to play. All the other ways have been explored."

Collin says that Ayler's ambitions may be closer to realization now.

Collin's belief echoes Ayler's own. "One day, everything will be as it should be," Ayler says at the end of his spoken introduction to the album My Name Is Albert Ayler.

Until then, the film My Name Is Albert Ayler is showing at art houses across the country, tribute projects are proliferating, and many of Ayler's own recordings are being reissued.