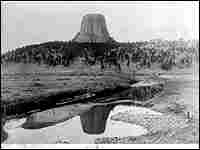 The first national monument created under the Antiquities Act was Devils Tower, a monolith of volcanic rock in Wyoming, shown here in 1890. John C.H. Grabill/Library of Congress hide caption 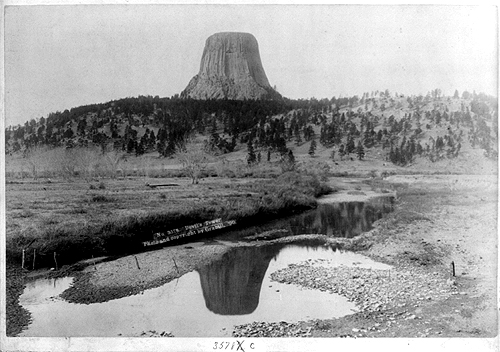 The first national monument created under the Antiquities Act was Devils Tower, a monolith of volcanic rock in Wyoming, shown here in 1890. 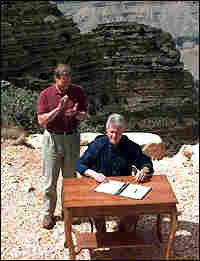 President Bill Clinton signs an order to create Grand Staircase-Escalante monument in Utah while sitting on the edge of the Grand Canyon in Arizona, Sept. 18, 1996, while Vice President Al Gore watches. The area holds one of the largest known U.S. coal reserves, which is now off limits for mining. Luke Frazza/AFP/Getty Images hide caption 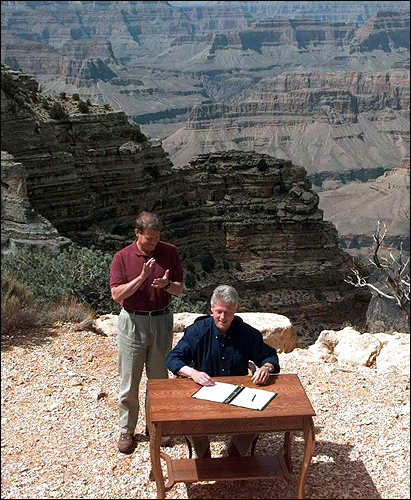 President Bill Clinton signs an order to create Grand Staircase-Escalante monument in Utah while sitting on the edge of the Grand Canyon in Arizona, Sept. 18, 1996, while Vice President Al Gore watches. The area holds one of the largest known U.S. coal reserves, which is now off limits for mining.

The Antiquities Act, passed in 1906, authorizes the president to single-handedly designate any federal public lands as national monuments.

Its creation was motivated by the looting of archaeological sites in the Southwest in the late 1800s. At that time, archaeologists realized that historical sites were being plundered and the artifacts disappearing into private collections or overseas museums.

The brief act — it's only four paragraphs long — was initially intended to protect just small archaeological sites, but it has since been interpreted to give presidents the power to set aside parcels of federal land of unlimited size and to restrict logging, hunting, grazing and mining on these sites.

Since 1906, 13 presidents, both Democratic and Republican, have used the authority of the Antiquities Act to proclaim 125 national monuments covering nearly 100 million acres of federal public lands. But such unilateral power has created fierce political brawls. Here are a few of the high — and low — points in the history of the Antiquities Act.

Under President Theodore Roosevelt's aggressive conservationism, the Antiquities Act was passed. Roosevelt used it to designate the 1,000-foot rock monolith Devils Tower in Wyoming as the first national monument. He set aside 17 more natural and cultural landmarks while president.

The first big opposition to the act came after President Franklin D. Roosevelt proclaimed the wildlife reserve Jackson Hole, Wyo., a national monument. Congress had refused to expand Grand Teton National Park because, in the words of Sen. Henry Ashurst of Arizona, "the other States are not going to put over on Wyoming something that her two senators do not want." Wyoming's congressmen had favored state and local control of the area and were angered by what they saw as Roosevelt's circumvention of the federal system of checks and balances.

Congress passed a bill to abolish Jackson Hole National Monument, but Roosevelt vetoed it, and the battle over the land continued until the end of the decade. In 1950, Congress gave in and added most of the monument into Grand Teton National Park, but it also banned the creation of any future national monuments in Wyoming without Congress's approval.

The battle, however, brought up two recurring tensions throughout the history of the Antiquities Act — between Congress and the president, and between the president and the states. Presidents' unilateral use of the act has often been challenged as a circumvention of democratic processes — that is, congressmen have no opportunity to speak for their constituents on the issue. And states sometimes are opposed to the creation of national monuments within their borders, as designations sometimes limit economic possibilities like mining and mineral leasing on the land. Often, though, they boost recreation and tourism. But presidents have defended their use of the Antiquities Act to cut through bureaucratic deadlock and protect vital natural areas under imminent threat.

President Jimmy Carter set aside the largest amount of land of any president to date — 56 million acres in Alaska — but not everyone was thrilled about it. Like FDR, he sidestepped Congress, which up to that point had failed to pass an Alaskan lands protection bill because Alaskans opposed it. Alaskans in the area were incensed, and citizens in Fairbanks even burned President Carter in effigy.

But Carter's executive order succeeded in breaking congressional deadlock, bringing opponents to recognize the need for compromise on an acceptable bill rather than no bill at all. After years of debate, the Alaska National Interest Lands Conservation Act was passed in 1980, expanding protected land in Alaska. However, Carter would be the last president to date to make a national monument in Alaska. In the same act, Congress also said the Antiquities Act couldn't be used to designate huge monuments in Alaska without the approval of Congress.

President Bill Clinton designated a series of rock formations and canyons as the Grand Staircase-Escalante monument in Utah. But some Utahans were none too happy about this, as it nixed plans for a coal mine. State politicians first learned of the plans for the national monument from a newspaper article only nine days before its public announcement, according to a statement by Utah Gov. Michael O. Leavitt. And to top it off, Clinton managed to offend Utahans by signing the executive proclamation to protect Utah while sitting on the Arizona side of the Grand Canyon.

But Clinton wasn't looking for the approval of Utahans; he knew he wouldn't win Utah in the upcoming election. Instead, the move won him favor across the rest of the country, says Destry Jarvis, who worked with the National Park Service during the Clinton administration. Clinton went on to designate more national monuments than any other president.

President George W. Bush exercised his first use of the Antiquities Act to protect a piece of land smaller than a city block — the African Burial Ground in Manhattan. Together with the surrounding area, the monument contains the remains of an estimated 15,000 Africans buried in the 17th and 18th centuries.

From the 1690s to the 1790s, free and enslaved Africans who died in the area, which was then called New Amsterdam, were buried in this unmarked cemetery at the city's outskirts. The site's existence wasn't discovered again until 1991, however, when excavation for a planned federal office building uncovered the graves. According to the U.S. National Park Service, the site has been called one of the most significant archaeological finds in U.S. history.