Accessibility links
Afghanistan Unveils Ambitious Development Plan Next month, Afghanistan will present a $50 billion strategy to rebuild the country. But given allegations of corruption, mismanagement and weak local governance, Western officials say the government still must prove it is capable of administering the five-year plan.

Final report in a three-part series 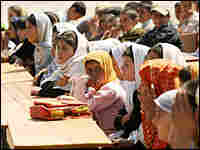 Afghan students listen during an opening ceremony at a school in Kabul in March. Authorities are struggling to ease overcrowding in local schools — one of the many development challenges Afghanistan faces. Massoud Hossain/AFP/Getty Image hide caption 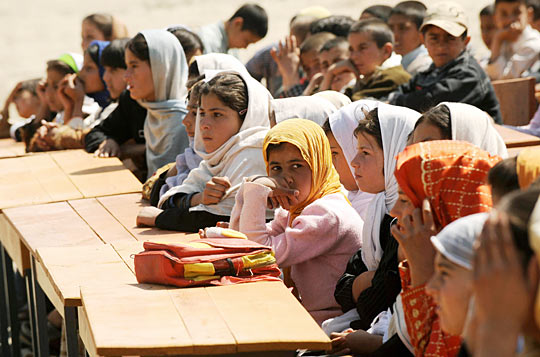 Afghan students listen during an opening ceremony at a school in Kabul in March. Authorities are struggling to ease overcrowding in local schools — one of the many development challenges Afghanistan faces.

The Afghan government has drawn up a $50 billion strategy to rebuild the nation and is asking the international community to foot the bill. This first-ever Afghan national development plan will be unveiled in Paris next month and is expected to generate debate.

But even if donors embrace the five-year strategy, they are unlikely to hand over a blank check.

Given allegations of widespread corruption, mismanagement within ministries and weak local governance, Western officials say the government still must prove itself to them. The new strategy faces these and more challenges ahead.

In the foothills of Kabul, hundreds of Afghan children pour out of a small school. It's only lunchtime, but they are leaving for the day to make room for another group of students.

Teachers here say they have no choice but to split the children into these four-hour shifts. They say they can't otherwise accommodate the 2,500 students in the school's 12 classrooms.

There are four times as many students as when Mahmoud Saikal attended school here. Saikal, a senior adviser on the government's new national development strategy, says he is not surprised about the overcrowding, given that officials have no idea who lives in Kabul anymore.

In the past, Kabul could barely accommodate 400,000 people, Saikal says. Now, the population has ballooned to more than 4 million people. But the city hasn't developed to keep pace.

Many of the newcomers are Afghan refugees returning from Pakistan or Iran since the fall of the Taliban.

Saikal says the government wasn't in a position to offer them land, houses or any kind of subsidy. As a result, these people grabbed land wherever they could and built mud-brick houses.

Now, squatters and a lack of planning have stretched public services in Kabul beyond their limit, Saikal says.

But he says the Afghan government has come up with a solution: a comprehensive strategy not only for Kabul but for all of the country's development needs.

Proponents say the plan could pull Afghanistan out of poverty by 2020. It provides a road map for everything from electricity to railways to social justice.

With a $50 billion price tag — more than three times as much as had been pledged here since 2002 — the strategy has the gotten the West's attention.

Most important, says Kai Eide, the United Nations' new special envoy to Afghanistan, is to convince donors that the plan can make a difference here and to determine whether the Afghan government has evolved enough to take over the reins of development.

"We do not expect to see a kind of Switzerland, or Norway, for that matter, over the next decades to come," Eide says, "but what we need to see is sufficient progress for the Afghans to sustain it and continue that by themselves."

Afghan leaders says they are are itching to do that. Jalani Popal heads the new Independent Directorate of Local Governance.

Still, questions remain about the government's ability to supervise where foreign development aid is going.

Many here point to the Ministry of Rural Rehabilitation and Development as a success story. Donors laud the ministry for getting hundreds of millions of dollars in wells, schools and other small projects out to far-flung provinces.

Problems Remain in Distribution of Aid

Yet how some Afghan contractors hired by the ministry spend international aid money raises serious questions. For example, one contractor in Kandahar province recently agreed to pay $100,000 to a local Taliban commander to ensure his men would leave the project alone.

The builder claims he and other contractors have no choice but to cut such deals to protect their projects in high-risk areas such as Kandahar.

He allowed NPR to listen to, but not tape, his negotiations by speakerphone with the Taliban leader. He also sent the Taliban commander a copy of the contract to prove he wasn't making more on the project than claimed.

Ministry head Mohammad Ehsan Zia says he has never heard of his ministry's money going to the Taliban. He adds that security is the contractors' responsibility and that his inspectors review all projects to make sure they are completed.

He says the the ministry's projects have expanded precisely because they do contract with local Kandahar companies.

"If they pay Taliban from their own pocket, that's not my problem," Zia says.

But Western officials such as the U.N.'s Eide say that sort of attitude from Afghan officials has to change. They can no longer turn a blind eye to bribes and kickbacks, which are rampant.

"There is a serious lack of accountability on the Afghan side: the way the money is spent, the way plans and priorities are set up," Eide says. "If there's one thing I would really like to see happen here over the next few weeks, it is a clear demonstration in concrete terms of readiness to combat corruption — not only verbally, not only in speeches, but in what we actually see in concrete measures."

Eide says a key issue at the Paris conference is for the government and donors to commit themselves to more than talk — because the patience of not only ordinary Afghans but of Western taxpayers is wearing thin when it comes to development in Afghanistan.