Accessibility links
Understanding Sen. Kennedy's Cancer Diagnosis Massachusetts Sen. Ted Kennedy has been diagnosed with a malignant glioma, a type of brain cancer. Dr. Andrew Norden of the Dana-Farber Cancer Institute in Boston talks about the treatment and prognosis of malignant gliomas.

Massachusetts Sen. Edward Kennedy was diagnosed with a malignant brain tumor Tuesday after a related seizure sent him to the hospital over the weekend.

The 76-year-old senator was transported to Massachusetts General Hospital in Boston following the incident at his Cape Cod home. In a statement released by the Kennedy family, the seizure was attributed to a malignant glioma, a type of brain cancer.

Dr. Andrew Norden of the Dana-Farber Cancer Institute in Boston spoke with Michele Norris about possible treatments and the prognosis in Sen. Kennedy's situation.

What is a glioma?

It's a primary brain tumor, meaning it starts in the brain. It's not the kind of brain cancer that's spread by metastasis from another organ. Gliomas are the most common primary brain tumors in adults. When they are malignant, they can be quite difficult to treat. We see about 10,000 to 15,000 of them newly diagnosed in the U.S. each year.

What are the treatment options?

It's difficult to say for sure which treatment would be recommended for the senator because there are a number of different types of malignant gliomas and we don't yet know which type he has. But in general, the treatment consists of radiation and chemotherapy, given together for six weeks. Then there is a brief treatment break, followed by chemotherapy alone, in monthly cycles for six to 12 months.

The chemotherapy usually used for gliomas is an oral chemotherapy called temozolomide. It's well-tolerated by most patients.

Would there be an effort to remove it by surgery?

Yes, I think so. Typically, treatment for this type of tumor begins with maximal surgical resection. What that means is that a surgeon tries to take out as much of the tumor as can be safely done without causing the patient any harm. We don't know what kind of surgery the senator has had, but I imagine an attempt at a surgical resection was undertaken.

Would age be a factor, since the senator is 76?

Age is a factor. We know that on average older patients — which means over 80 in this population — don't have as favorable of outcomes as younger patients do. That said, there are older patients who do quite well, particularly healthy ones. And my understanding of the senator's current medical condition is that it's quite good, so I would expect him to do better than average.

Has the senator already undergone surgery?

He has. We know that he has had a biopsy according to the press release. It's difficult to know what is meant by the term biopsy in this situation, but every biopsy involves at least taking a piece of tumor to a pathologist to review and determine the type.

The tumor is said to be in the left parietal lobe. What does that tell you about prognosis and function, since this lobe controls sensory comprehension and visual control?

In general, with a tumor in the parietal lobe, one would not expect significant speech difficulties. The speech centers are generally thought to be in the bottom portion of the frontal lobe and the top portion of the temporal lobe. One troubling problem with brain tumors, though, is they tend to have a fair amount of surrounding swelling.

So if this tumor in the left parietal lobe has some swelling involving speech areas, either in the frontal or temporal lobes, then it's possible to have difficulty either with expressive speech — finding words or simply getting fluent sentences out — or to have difficulty understanding speech, either spoken or written. But, again, one would need to examine an individual to determine if those deficits are present, and it's possible one would have no symptoms at all.

Because of high blood flow to the brain, is there worry that the tumor might be fast growing?

In general when one speaks of a malignant glioma, which is what they're calling Sen. Kennedy's tumor, we're talking of a tumor that is fast growing. Gliomas are graded on a scale of 1 to 4 by the World Health Organization, and grades 3 and 4 are also called malignant gliomas. That doesn't mean that they spread, but that they have the potential to grow quickly.

The most common gliomas are grade 4 tumors, which are called glioblastomas. But until we have a final pathology report, I don't think we'll know if that's the diagnosis.

The Kennedy family has reported that Sen. Kennedy has had no further seizures, is in good overall condition, and is up and walking around. What does that tell you?

That's a good sign. It indicates he hasn't had any serious consequences of the surgery. It also indicates that any swelling around this tumor is in reasonably good control. I suspect he's on medication to control swelling and also on medication to prevent further seizures. The fact that he's able to be up and about, watching television, which I understand he did over the weekend, indicates that he has made a good recovery, and I suspect he may be ready to leave the hospital in the next few days.

Questions and answers have been edited for content and clarity. 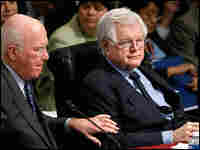 Dr. Andrew Norden of the Dana Farber Cancer Institute in Boston spoke with Michele Norris about possible treatments for glioma, and the prognosis in Sen. Kennedy's situation. Read the Q&A with Norden.

Doctors in Boston on Tuesday announced that Sen. Ted Kennedy has a malignant brain tumor.

The tumor was discovered in tests after Kennedy suffered two seizures over the weekend. Kennedy has been resting at Boston's Massachusetts General Hospital since then. The prognosis is uncertain.

The tumor is a malignant glioma located in Kennedy's left parietal lobe — about at the top of the head.

The usual treatment for such a tumor includes combinations of radiation and chemotherapy, but the precise treatment for Kennedy will be determined after further tests and discussion among his physicians, doctors said.

After receiving the news at 1:20 ET, President Bush said through a spokesman that he was deeply saddened and praying for Kennedy.

The news also coincided with a weekly Democratic luncheon, which was under way on Capitol Hill behind closed doors. There, Sen. John Kerry (D-MA) reportedly told the group that he had spoken to Sen. Kennedy by phone and that he found Kennedy to be optimistic.

Sen. Arlen Specter (R-PA), who is fighting a recurrence of Hodgkin's Disease, a cancer of the lymph system, also commented on the diagnosis.

"Sen. Kennedy is a real fighter. We all know that," Specter said. "I'm betting on Sen. Kennedy."

Kennedy is an almost iconic figure on Capitol Hill. News of his diagnosis was greeted with sadness on both sides of the aisle.

"All I can say is he's a great legislator, he's a great human being, a person who always has that sense of humor, and that will pull him through, between you and me," said Republican Sen. Orrin Hatch of Utah. "And I'll be praying for him, too."

Sen. Chris Dodd of Connecticut, a fellow Democrat, is perhaps Kennedy's best friend in the Senate.

"He's very confident. He's a strong guy, has a great heart, and we're confident he'll be back here," Dodd told reporters as he fought back tears.

The Kennedy family has made no public statement. Doctors say the senator has had no further seizures, is in good spirits and is resting comfortably.