Accessibility links
Biography Details the 'King of Comics' In his new biography, Kirby: King of Comics, TV and comics writer Mark Evanier details the life and career of noted comic artist Jack Kirby, the co-creator of the Marvel Comics characters the Fantastic Four, the Incredible Hulk and X-Men. 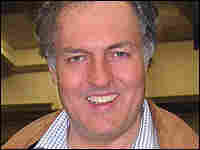 Biographer Mark Evanier got to know Jack Kirby shortly after he graduated from high school, when he took a job as Kirby's assistant. Harry N. Abrams, Inc. hide caption

Kirby is the co-creator (with Stan Lee) of the Marvel Comics characters the Fantastic Four, the Incredible Hulk and X-Men. He's also credited with changing the look of the comics in the 1940s, moving away from visuals that aped what was being done in syndicated newspaper strips.

Evanier got to know Kirby when, as a young man recently out of high school, he took a job working as Kirby's assistant. Since that time Evanier has written for several cartoon series, including Scooby Doo, ABC Weekend Special, CBS Storybreak and Superman: The Animated Series. 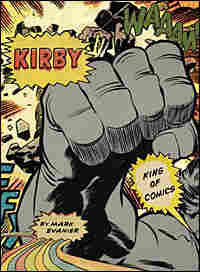 Jack Kirby didn't invent the comic book. It just seems that way. It's 1939 and he's still a few years from establishing himself as one of the most important, brilliant innovators of an emerging form. He isn't even Jack Kirby yet. He's Jacob Kurtzberg, from the Kurtzberg family on Suffolk Street in not the best part of New York. At age twenty-one he's trying to do the most important thing he believes a man can do: provide for his family, bring home a paycheck. Nothing else matters if you don't manage that.

Much of the work in comics is done in "shops"--cramped quarters where artists toil at rows of drawing tables. The money isn't good, but it's good for a young man whose neighborhood has yet to see evidence that the Great Depression is ending. It at least beats selling newspapers or several other alternatives he's tried.

So Jacob joins the throng of young artists wandering the streets, all toting large black portfolios crammed with samples. Most of the samples are variations (or outright plagiarisms) of the newspaper strips that had initially moved each to pick up a pencil. Eventually, the young men all seem to wind up working for Victor Fox ... at least for a few weeks, until something better comes along.

Legend has it that Fox had been an accountant for Harry Donenfeld, publisher of Detective Comics and Action Comics. One morning, the story goes, sales figures came in on the first issue of Action, which featured a new strip called "Superman" by Jerome Siegel and Joseph Shuster. Fox saw the numbers, quit his job, rented an office in the same building, and by close of day was hiring artists as the head of Fox Comics, Inc.

Fox is an old-time hustler/financier who's spent years sprinting from one dubious enterprise to another. Most of the early funnybook publishers are like that--hardscrabble entrepreneurs lacking both class and capital. What will turn some of them into multimillionaires--and, ipso facto, into legitimate businessmen--is if they get their fingers on a smash hit. Say, if someone sends them a Superman or if Bob Kane walks in with the beginnings of something called Batman.

Or if, in years to come, they hire Jack Kirby.

Victor Fox will not be so fortunate, even though most of the great creative talents will pass through his office, some at full sprint. At first, he buys stories from a studio run by Will Eisner and Jerry Iger. After Eisner goes off and creates the Spirit, Fox sets up his own operation, placing ads in The New York Times classifieds to recruit a staff. His artists could work at home, but Fox feels that since he's paying them, he's going to experience the joy of treating them like dirt every day.

So they sit there, eight a.m. to six p.m. or later, filling up illustration boards--young men like Bill Everett (who would soon create the Sub-Mariner), Joe Simon (who, with Kirby, would create Captain America and dozens of other hits), and Charles Nicholas Wojtkowski (who had already created Fox's anemic star super hero, Blue Beetle).

As they all race to finish at least three pages per day, Fox strides up and down the aisles with the posture of Groucho Marx, clutching his latest sales figures and muttering, "I'm King of the Comics! I'm King of the Comics!" Then he pauses at some artist's desk, glances at work that as a former seller of junk bonds he's eminently qualified to judge, and yells, "That stinks! Work faster, you son of a bitch!"

No one's producing masterpieces ... but then Fox isn't paying for masterpieces. "I'd draw a big cloud and a teensy airplane and that was the panel," Jake (soon to be Jack) would later recall. One time, he fills most of a panel by writing "Wow" across it, like a sound effect. Fox, pacing about, stops and asks, "What the hell is that?"

Fox studies the panel for a few minutes, shifting the cigar from one side of

"It's part of the story," Kurtzberg explains.

Fox nods in understanding, then calls all the other artists in the place to stop working and gather 'round Kurtzberg's drawing table. "Jake here is going to tell you about 'Wow.' Go on, Jake. Tell them about 'Wow!' "

Jake stammers out an explanation having to do with filling panels with energy and excitement, and how a word like "Wow" reaches the kids on their own level. And of course, all the artists understand that "Wow" is just Kurtzberg's way of getting out of drawing a panel. Each of them nods, returns to his table, and immediately writes "Wow" across the next panel--no matter what's supposed to be in there.

Eventually, the King of Comics tires of getting up in the a.m. to let in the artists. He calls his crew together and asks who among them was ever a Boy Scout. "I was," announces Al Harvey, a production artist who would soon establish the comic book company bearing his surname. Fox hands him a key and tells him, "From now on, you open up."

Thereafter, Fox breezes in around eleven to begin berating his staff. But each morning before he arrives, the one-time Boy Scout and other artists take turns imitating their employer, pacing between the drawing tables repeating, "I'm King of the Comics!" Forever after, Kurtzberg and Bill Everett would greet each other with that impression.

It's the mid-sixties. Call it 1965. The Marvel Comics Group is publishing The Fantastic Four, Spider-Man, and The X-Men, among others. Jacob Kurtzberg has long since become Jack Kirby, the preeminent artist of action-adventure comic books. At the moment, he's Marvel's star illustrator and co-creator of a new Renaissance for the comic book business. He's also the instrument of change for yet another catchpenny publisher who's becoming wealthy. In this case, the firm is well on its way to becoming a multibillion dollar empire and a fixture of American popular fiction.

The shops long behind him, Kirby works at home and comes into New York City once a week to drop off pages at the Marvel offices. Less often, if he can manage it . . . because when he's on the train he's not drawing, and that's what Kirby is still all about: providing for his family. He wants to do great stories and express himself and share his incredible imagination with the world, and all that is fine. But being a good provider is still Job One for him and always will be.

On one office visit he runs into Everett and they exchange Victor Fox impressions, a quarter century after the fact. They're just discussing where to go for lunch when Editor in Chief Stan Lee walks up and shows Jack a new Bullpen Bulletins house ad. "I'm gonna give you a real buildup, Jack," Stan says. "See here? I'm calling you the King of the Comics!"

Kirby and Everett fall over laughing. "No, no," Jack protests. "Make Bill Everett King of the Comics!"

Everett will have none of it. "Jack is definitely King of Comics," he argues. Lee sides with Everett, so Kirby is stuck forever with the nickname. For a long time this truly modest man is embarrassed by it. Eventually, so many are calling him "King" that he comes to accept it. Who knows? Maybe a little promotional gimmick will translate into higher take-home pay.

It is, of course, the perfect title for a book about Kirby, but Jack would have wanted everyone to know it was meant with a twinkle. Everything else about him was vested with power and planet-rocking explosions and cosmic energy and changing the world around him, leaving nothing the way he found it. 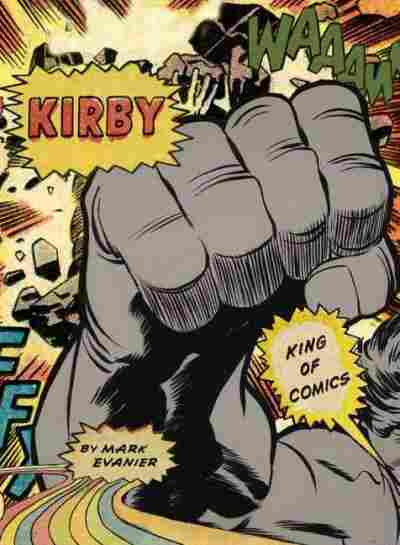 by Mark Evanier and Neil Gaiman