Accessibility links
Jamshied Sharifi: The World's Music as 'One' For his new album, the Iranian-American musician put together an all-star cast of singers and instrumentalists from several different cultures. One is a celebration of international musicians thriving on their differences.

Listen
Jamshied Sharifi: The World's Music as 'One' 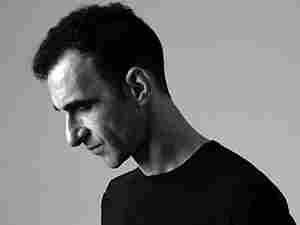 It's too bad the larger world can't be like the world of musicians, where cultural differences are viewed in a positive way — as a source of inspiration, not of suspicion.

The title of Jamshied Sharifi's new album, One, refers to that coming together.

"The inspiration for the record's title is a very simple observation that I had while working with so many artists from around the world: that what unites us is more than what separates us," Sharifi says. "It's so easy for us to find common ground."

Consider Sharifi's upbringing. Born and raised in Topeka, Kan., he was exposed to Middle Eastern music and jazz by his Iranian father. His American mother taught him European classical and church music. He went on to study jazz piano, composition and film scoring at Berklee College of Music in Boston.

"It is a record in which you can hear ... definitely the hand of an arranger," he says. "And you can also hear people improvising, you know. I wanted to give space for some of the great players I knew."

It's a transcultural all-star ensemble. Sharifi, who plays multiple instruments, wrote much of the material with specific musicians in mind, including some of the biggest world-music stars: Hassan Hakmoun, Abdoulaye Diabate, Paula Cole, Yungchen Lhamo and Vishal Vaid.

"Every one of them brought more to the table than I would have expected," Sharifi says. "Those things altered in some cases the form of the track; absolutely they altered the balance of other elements ... I mean, really every phase of the process would send me back to the drawing board."

In the track "Darfur Is Burning," Sharifi orchestrates a kaleidoscope of music from the East and the West. The song was inspired by the writer Primo Levi, an Italian survivor of Auschwitz.

"He said, people have said about the Holocaust, 'Never again,'" Sharifi says. "And yet it's happened already, and he pointed to Cambodia. He says it will happen again and we are, it seems, powerless to stop it."

There are some other wry political comments elsewhere, as well. Take the title of "As Mosst, Keh Bar Mosst."

"Which basically means the terrible situation we find ourselves in is one of our own making," Sharifi says. "I was trying to think of a suitable title for the Iraq war. I thought, maybe a shorthand for it would be, 'We really stepped in it this time.'"

One of the most poignant moments is "Requiem," dedicated to those who lost their lives on Sept. 11, 2001. It's personal: Sharifi lived in lower Manhattan, just blocks from Ground Zero.

"That track is a response to that. The voices that you hear running through it very softly are my wife and daughter doing a very innocent kind of almost like a pygmy chant. And I just wanted to write something that reflected the sadness of the moment for me, the sense of so many people being lost."

Essentially, though, Sharifi's album One is a celebration of international musicians exploring, and thriving, on their differences. That is, becoming one.