Accessibility links
Obama Points to Pledged Delegates Sen. Barack Obama is now assured of an absolute majority of pledged delegates in the Democratic presidential race — with expectations that flexible superdelegates will follow. Now he's moving toward a declaration of victory over Sen. Hillary Clinton.

Sen. Barack Obama is now assured of an absolute majority of pledged delegates in the Democratic presidential race — with expectations that flexible superdelegates will follow. Now he's moving toward a declaration of victory over Sen. Hillary Clinton.

DON GONYEA: This is Don Gonyea with the Obama campaign in Des Moines, where he was greeted last night by a raucous crowd of 7,500 at an outdoor rally not far from the State Capitol building.

BONO (Lead Singer, U2): (Singing) You know I'm not a hopeless case. What you don't have…

GONYEA: This is where Obama won his first big victory this year in the Iowa caucuses back on January 3rd, and he came back to celebrate and to remember.

Senator BARACK OBAMA (Democrat, Illinois; Democratic Presidential Candidate): It is good to be back in Iowa.

GONYEA: And while yesterday's primaries may have been a split decision for Obama, he easily strode past another milestone in the race. With last night's results, the Obama campaign has guaranteed that the primary season will end with him holding a majority of the delegates won in primaries and caucuses.

Sen. OBAMA: We have returned to Iowa with a majority of delegates elected by the American people…

Sen. OBAMA: …and you have put us within reach of the Democratic nomination for president of the United States of America.

GONYEA: But Obama did stop just short of claiming the nomination itself. It's not that he doubts the trend. For months, he led among pledged delegates but trailed among superdelegates. And earlier this month, he passed Hillary Clinton in that category as well, opening a lead that continues to widen almost daily. But he also has to be careful not to anger Clinton supporters by prematurely declaring her candidacy over before she does so herself, hence this language at the Des Moines rally last night.

Sen. OBAMA: Senator Clinton has shattered myths and broken barriers and changed the America in which my daughters and your daughters will come of age. And for that, we are grateful to her.

GONYEA: But for the Iowa-based Obama supporters standing outside on this relatively balmy evening, Obama was back in their town to mark the spot where his ascent began while they, these voters, say they are ready for the next big test. Jason Belding is a 38-year-old Des Moines banker.

Mr. JASON BELDING (Banker): I think most of the people kind of realize that it's his nomination. I mean, all you hear him talking about is McCain, McCain, McCain. And when this is all done, all the Democrats are going to come together and get it going.

GONYEA: Obama is in Florida today and is, indeed, campaigning full time against John McCain, a strategy he'll continue over the next two weeks, while the last three primaries add their votes to the national tally.

You want more coverage? Go where I just went: npr.org/elections.

David Greene with the Clinton Campaign 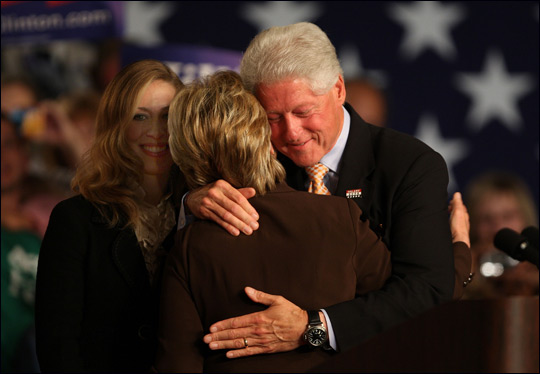 Clinton gets support from her husband, former President Bill Clinton, and their daughter, Chelsea, at her election night rally in Louisville, Ky.

A campaign worker holds a sign welcoming Obama back to Iowa before his rally in Des Moines. Obama won his first early voting contest in the Iowa caucuses in January. Chip Somodevilla/Getty Images hide caption 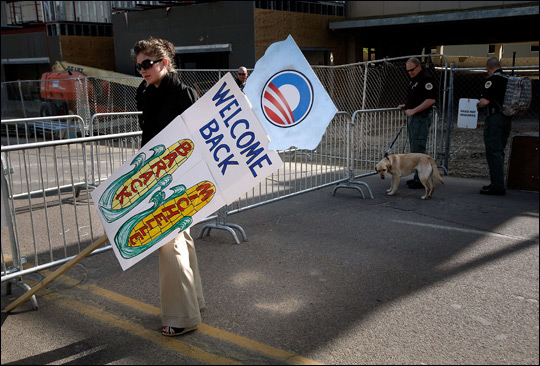 A campaign worker holds a sign welcoming Obama back to Iowa before his rally in Des Moines. Obama won his first early voting contest in the Iowa caucuses in January. 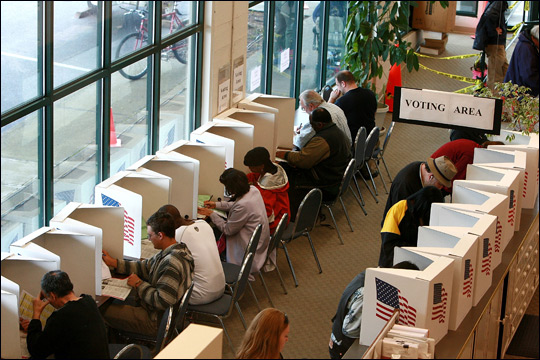 Voters cast ballots at the Multnomah County elections office on May 20, 2008, in Portland, Ore.

Now only three Democratic primaries remain. Clinton vowed to contest every one of them during her address to jubilant supporters in Louisville on Tuesday evening.

Calling the race for the nomination "close," Clinton said, "This continues to be a tough fight, and I have fought it the only way I know how: with determination, with never giving up and never giving in."

There aren't enough delegates left in the upcoming contests in Puerto Rico, South Dakota and Montana for Clinton to close Obama's lead. But Clinton said that neither she nor Obama can get enough delegates out of the next three primaries to secure the nomination.

So she said that the party leaders known as superdelegates "will have a tough choice to make: Who is ready to lead our party at the top of the ticket, who ready to defeat [presumptive Republican nominee] Sen. [John] McCain .... Who is ready on day one to lead?"

Obama Declares the Nomination 'Within Reach'

Obama now assumes he'll be the Democratic Party's answer to Clinton's questions. If he had been sidling up to a general election campaign over the past couple of weeks, he plunged in with both feet on Tuesday night.

Anticipating his victory in Oregon, Obama declared that he has won a majority of pledged delegates, and that this "put us within reach" of the Democratic presidential nomination.

His audience was not in Oregon, however, but in front of the statehouse in Des Moines, Iowa. His surprising victory in the state in the January caucuses gave early validation to his candidacy against better-known rivals Clinton and former North Carolina Sen. John Edwards, who recently endorsed Obama. Also, Iowa could be an important swing state in November.

And with November in mind, Obama went after the presumptive republican nominee, Arizona Sen. John McCain. He tried to hang unpopular President Bush around McCain's neck like an anchor.

"The Bush tax cuts for the wealthiest 2 percent of Americans that once bothered John McCain's conscience are now his only economic policy," Obama said.

"I will leave it up to Sen. McCain to explain to the American people whether his policies and positions represent long-held convictions or Washington calculations," said Obama, "but the one thing they don't represent is change."

In her speech in Louisville earlier in the evening, Clinton followed what has become her practice lately, speaking of Obama respectfully rather than critically.

She made a pitch for Democrats to come together in November, saying she would work "as hard as I can to elect a Democratic president this fall."

"It's a little bit of a cold war going on," Washington Post columnist E.J. Dionne told NPR, "but not a hot war any more. She knows that her future in the party ... depends on coming to Obama's defense this fall."

Likewise in Des Moines, Obama went out of his way to praise Hillary Clinton not only as a worthy opponent, but as a historic one.

He called Clinton "one of the most formidable candidates to ever run for this office." He congratulated her on her victory in Kentucky, adding, "No matter how this primary ends, Sen. Clinton has shattered myths and broken barriers and changed the America in which my daughters and your daughters will come of age. And for that we are grateful to her."

Both Clinton and Obama pledged to campaign hard in the remaining primaries in Puerto Rico (June 1), Montana and South Dakota (both on June 3). But first, they're both campaigning in Florida.

Florida looms large in Clinton's argument to Democratic superdelegates that she leads in at least one metric: the popular vote. The Sunshine State went for Clinton, but it was stripped of its delegates for moving its primary into January in violation of national Democratic Party rules.

Likewise Michigan, which also held an unsanctioned primary, which Clinton won. Obama's name didn't even appear on the Michigan ballot. The New York senator maintains that she'd be ahead in the popular vote if the tallies from those two states were counted. She also has long called on the Democratic Party to forgive Florida and Michigan and seat all the delegates.

Obama has a different task in Florida. In deference to the Democratic party's sanctions, none of the candidates campaigned there. So he has to introduce himself to voters in this important swing state and mend fences in advance of the general election.

According to Associated Press exit polls, Kentucky had one of the least liberal electorates of any Democratic contest this year, with only about one-third of voters identifying themselves as liberals. About two-thirds of Kentucky voters said the economy was the top issue. As usual, Clinton ran well with older voters, rural voters, those with lower incomes and those with less education.

That held true in Oregon as well, where voters were polled by phone because of that state's vote-by-mail primary. Oregon differed from Kentucky in a number of areas. For example, 6 in 10 Oregon Democrats identified themselves as liberal, and fewer than half picked the economy as the top issue.

As in previous contests, Obama tended to appeal most strongly to young, urban, wealthier and better-educated voters. That's a demographic that describes Oregon much more than Kentucky, though voters in Louisville and some of Kentucky's other urban areas favored Obama by a few points.

Nearly all of Obama's supporters in Kentucky and Oregon believed he will win the nomination. Half of Clinton's voters in Oregon and one-third in Kentucky also think Obama will be the Democratic nominee.

With reporting by NPR staff.