Accessibility links
Libertarian Island: No Rules, Just Rich Dudes What happens when Milton Friedman's grandson, an eccentric billionaire and some ocean real estate all intersect? You get "seasteads," the first of which is scheduled to hit the waters of San Francisco bay in two years, according to Alexis Madrigal, who wrote about the ocean homesteads for Wired magazine. 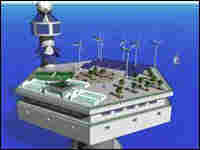 A model of a "seastead." Seasteading.org hide caption

What happens when Milton Friedman's grandson, an eccentric billionaire and some ocean real estate all intersect? You get "seasteads," permanent dwellings on the ocean. The first seastead is scheduled to hit the waters of San Francisco Bay in two years.

"Seasteading is essentially trying to create a low-cost vessel that you can move out into the open ocean so that you can experiment and live out on a boat essentially... and install whatever political system you want, in particular, say, libertarian --a political system where there is very little government," says Alexis Madrigal, who wrote about seasteading for Wired magazine. "And the idea is that it would actually improve government because if you didn't like what the government of your floating city state did, you could just motor away."

The major players behind seasteading are Paypal inventor Peter Thiel, super-rich ex-Sun Microsystems executive Wayne Gramlich and Milton Friedman's Google engineer grandson. They all want their colonies to adhere to a specific system: Libertarianism, answering a long-time dream of free marketers: If only there was a place residents could, at last, live purely according to the laissez-faire philosophy.

The pods are based on oil rig technology, Madrigal says. One example in the North Sea is four times the size of the Eiffel Tower. But Madrigal says the Seasteading operation is focusing on much smaller, single-family dwellings.

Thiel, who is also an early Facebook investor, is known for investing in futuristic efforts. Madrigal points out that Thiel is also a member of The Methuselah Foundation, an organization devoted to stopping aging. In other words, Thiel is an enthusiast of many esoteric initiatives and isn't exactly holding his breath until the Seastead team slips one into the ocean. Therefore, his $500,000 check to Seasteading should, Madrigal says, be viewed as a "down-payment" on an idea more than a ringing endorsement.

"If they come up with something, good, if not, no big deal," Madrigal says. "They need maybe another million, 2 million dollars . . . if they make progress they get more money, if not, I got on NPR again."