Accessibility links
Villagers Fight for Land in Rapidly Developing China As Chinese peasants move to cities in search of opportunity, cities expand into what used to be the country. The case of a group of peasants on the outskirts of Chengdu in southwestern China illustrates the often devastating results. 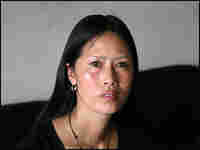 For seven years, Lei Mingfen and some of her neighbors resisted plans to pave over and build high-rise apartments in their rural village on the outskirts of Chengdu, China. She took her protest to Beijing — and was imprisoned for 80 days. Art Silverman/NPR hide caption 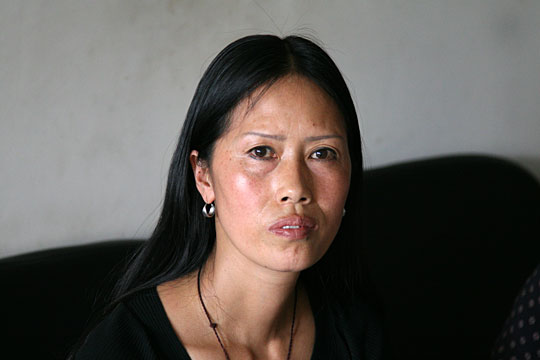 For seven years, Lei Mingfen and some of her neighbors resisted plans to pave over and build high-rise apartments in their rural village on the outskirts of Chengdu, China. She took her protest to Beijing — and was imprisoned for 80 days. 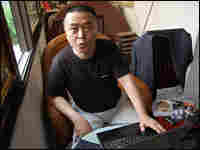 Huang Qi is an activist who tracks human-rights abuse cases in China. He says the most common type of case these days is the land grab. Art Silverman/NPR hide caption 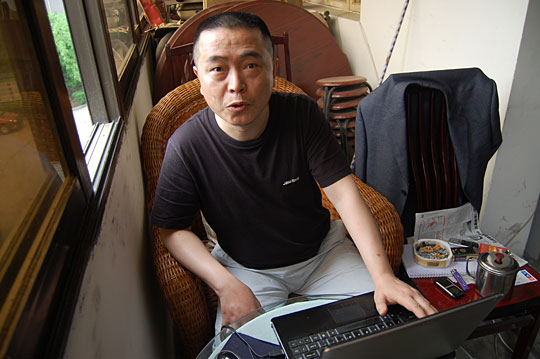 Huang Qi is an activist who tracks human-rights abuse cases in China. He says the most common type of case these days is the land grab.

Chengdu — the capital of Sichuan province, with a population of 4.5 million — emerged relatively unscathed from the massive earthquake that hit the southwestern Chinese province on May 12.

The countryside north of the city, though, was devastated.

But the distinction between city and country here is fluid. As Chinese peasants move to the city in search of opportunity, the city expands outward into what used to be the country.

In this three-part series, NPR is introducing listeners to people who moved to neighborhoods beyond Chengdu's Third Ring Road. The road is within the city but several miles from downtown.

In the final report, NPR's Robert Siegel profiles a group of people who didn't move at all: They stayed in the country, and the city came to them.

Their collective farm has been cleared and paved over to make way for high-rise apartments.

Their experience has been a catastrophe, just outside the Third Ring Road.

Although the villagers once grew vegetables and rice on their land, you'd never know it now: Their former farmland is a rubble-strewn, urban construction site, in the Wuho district on Chengdu's west side.

In 2001, the local government offered them compensation for their homes and fields.

It was a take-it-or-leave-it offer for the land, the locals tell Siegel: 15,000 renminbi (approximately $2,200) for each mou (about one-sixth of an acre). That's what people now pay for every 50 square feet in a new apartment.

Lei Mingfen, a slim, elegant woman of 45, is one of the villagers affected by the development. She has immersed herself in Chinese property law since a developer began building the high-rises after leasing the land from the local government.

For seven years, Lei and other villagers resisted the plan to pave over their formerly rural village. They thought they deserved just compensation. They staged a sit-in and stayed on after the water was cut off.

They say thugs even came to beat down their doors, and they have photos of the damage.

Finally, Lei and several other women did something that is both traditionally Chinese and audaciously risky: Last September, convinced that Chinese law was on their side and that national policies are fair even if local implementation of them is not, they went over the heads of the Chengdu authorities. They traveled to the national capital, Beijing, to petition the authorities there.

And the price they paid was enormous.

On Sept. 17, 2007, Lei was arrested and imprisoned for 80 days. During her incarceration, she says she was beaten, interrogated harshly and forced to admit that she had broken the law.

Ultimately, the group of protesters had to leave, and their homes were demolished.

Later, groups of families from the collective took the deal and got housing. The protesters have had to fend for themselves.

Zhou Defu, another villager, still lives in the house that he built, he says, with his own hands. He now faces eviction and the bulldozer.

Bare-chested, wearing just a pair of shorts, he explains how he and his wife plan to hold out: He has installed a steel security door and has recently finished plastering over a living room window to make sure no one can get in that way.

Zhou says he will die with his home if he must.

NPR's phone calls to the prosecutor who handled the case of the protesters were not answered.

Zhou and Lei, the villager who was imprisoned for 80 days, are being assisted by Huang Qi, an activist who runs a Chinese human-rights network.

On a Web site that is blocked by the Chinese authorities, Huang tracks thousands of cases nationwide that he says amount to human-rights abuses. He says the most common kind of case nowadays is the land grab.

He says most of these land-grab cases involve Chinese government officials acting in concert with real estate developers for their own gain. They buy land very cheaply — just a few percent of the land's real value — from farmers.

According to law, peasants have the right not to sell the land.

But it's not that simple, Huang says.

"During this process, the government often employs the underworld and the apparatus of the state to force the farmers to sell," he says.

Huang studied telecommunications engineering and made enough money in the Chinese business boom of the 1990s to start searching for meaning in his life, he says. He found it in documenting human-rights abuses.

Among his achievements, Huang exposed a scheme that required tens of thousands of Chinese workers to have and pay for unnecessary appendectomies. He defended a practitioner of Falun Gong, which is regarded by Chinese officialdom as a subversive cult. He also championed a successful wrongful death case, arising from the suppression of the Tiananmen Square protests of 1989.

For his work, he was charged with incitement and sent to prison for five years. He got out in 2005 and resumed his human-rights work.

When asked whether there's a line that, if crossed, would mean his going back to prison, Huang replies thoughtfully.

"It mainly depends on how we make cases. We make sure to follow the law of the People's Republic of China, and we make certain we present our cases objectively and truthfully," Huang says.

"Then, in my opinion, the line does not exist, at least in present-day China, because compared to 10 years ago, the human-rights situation in China today has improved a great deal."

After the earthquake, NPR revisited Huang, whose Web site has turned its attention to earthquake relief. He says the government should be more open to foreign assistance and to grass-roots, spontaneous relief efforts, as opposed to insisting that all efforts be organized by the government.

Although his criticism of the government at a moment of intensified patriotism might be considered a big risk, Huang says he isn't worried.

"We've been doing this for over 10 years. It's nothing new. And we consider it our God-given duty to criticize and to bring attention to this.

"Over the past few days, we have seen some good things the government has done and some bad stuff. One of the good things, for example, is the relative openness to the media. Openness of information will prevent unnecessary panic," Huang says.

The earthquake has redirected everyone's attention in Sichuan. But inevitably, it will multiply the questions and allegations of land grabs: If whole towns are to be demolished or rebuilt, who will be compensated, and who will do the building? Who will benefit from the bulldozer and who will be its victims?