Accessibility links
The Joy and Pain in Beethoven's Big Fugue It's been called "repellent," "joyous," and "the most advanced piece of music anyone could think of." Hear Beethoven's Grosse Fuge played by the adventurous Borromeo String Quartet in the studios of WGBH in Boston.

A Visitor's Guide to the 'Grosse Fuge' 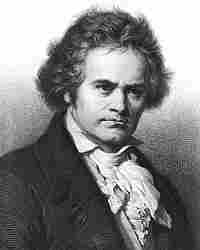 Beethoven's Grosse Fuge was originally composed as the final movement to his String Quartet, Op. 130. He decided to separate the fugue from the quartet, perhaps because he realized it was too powerful and peculiar. iStock hide caption 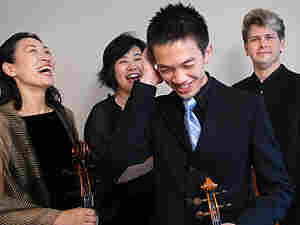 The members of the Borromeo Quartet are regular visitors to WGBH. To hear and see them perform has always felt to me like taking a private tour through a composer's mind. They probe and analyze from every angle until they discover how to best unveil the psychological, physical, and spiritual states that a great piece of music evokes.

The piece is something of a rollercoaster ride: Beethoven takes four voices, fully engaged and throbbing at high speeds, and drives them to the edge of a cliff before stopping them on a dime to listen to the vastness of silence. It's a moment that feels like an eternity. That's when the Borromeos try to keep our ears alert for both the music and the silence.

Violinist Nick Kitchen says that Beethoven's "Great Fugue" contains what may be the most extended music played continuously at the fortissimo level.

"A whole five minutes of music," Kitchen says, "that never leaves the loudest dynamic we can play." But there's also one of the very longest sections of sempre pianissimo, requiring the players to bow about as softly as they can.

With all the Grosse Fuge's extremes — its volcanic eruptions and its startling calm — the Borromeos are bent on getting us to feel the unbridled joy in the music.

Kitchen admits that the ensemble has come to refer to the quartet's strangely happy middle portion as the "nanny-nanny-boo-boo" section.

The group has even created a presentation for children about the Grosse Fuge, complete with witty animation. It tells the story of a wigmaker who tries to design a wig for Beethoven. But she learns through listening to his Grosse Fuge that this composer is living much too far into the future.

I think you'll understand exactly how she feels when you hear this startling, forward-thinking music in the hands of the Borromeo String Quartet.

About the Borromeo String Quartet

It makes sense to judge string quartets by how they play the music of Josef Haydn. Some ensembles approach the notes with bewigged reverence, but then there's the Borromeo String Quartet. The group, as critic Joe Banno described in the Washington Post, "made the composer sound like a life-loving creature of hearty appetites and generous wit."

The Borromeos rarely play it safe. They're champions of new music — collaborating with contemporary composers such as Osvaldo Golijov, John Harbison, and Jennifer Higdon — but they also thrive on making the old classics sound vital and fresh.

The group's 2007 Avery Fisher Career Grant award seems particularly well-deserved. Many of the Borromeos' past projects reflect its adventurous spirit. In Pittsburgh, the group launched a five-month series throughout the city, exploring the music of Bela Bartok. In Providence, R.I., they taught inner-city kids about classical music. And since 2003, first violinist Nick Kitchen has been documenting Borromeo performances on video tape, available free at the group's Web site.

The Borromeo Quartet is loosely based in Boston — where it serves as the Quartet-in-Residence at the New England Conservatory — but was formed in 1989 in Italy. The group plays more than 100 concerts a year around the world, including additional residencies in Japan and in Taos, N.M.