Accessibility links
Afghan Girl Has Surgery for Heart Defect Adila, a 6-year-old Afghan girl with a congenital heart defect, had life-saving surgery in Karachi, Pakistan, on Friday. She's in the cardiac intensive care unit, but is stable.

Adila, a 6-year-old Afghan girl with a congenital heart defect, had life-saving surgery in Karachi, Pakistan, on Friday. She's in the cardiac intensive care unit, but is stable.

Here's a new development in a story we've been following about a six-year-old Afghan girl named Adila. She has a life-threatening heart defect, and with the help of the U.S. military, she was taken by her family to Karachi in southeastern Pakistan for surgery.

SORAYA SARHADDI NELSON: After weeks of delay, Adila went into surgery Friday night to repair her malformed heart. She has Tetralogy of Fallot, a birth defect that keeps the heart from sending enough oxygen to the body. After a series of missteps, U.S. Army doctors in Afghanistan last month arranged for Adila to have the corrective surgery in Pakistan. The Army found an anonymous donor to cover the roughly $6,000 cost of Adila's operation. Soldiers also paid for Adila's family to take her by bus to Karachi. But she became sick during the two-day journey with a stubborn infection that resisted antibiotics. That led the doctors at the Aga Khan Hospital in Karachi to repeatedly delay her surgery.

They wanted to clear up the infection first. But on Friday, the surgeons decided they could wait no longer because Adila was rapidly weakening. So that evening, they began to operate. The surgery lasted about four hours. Doctors say it was a success, and Adila was well enough to be moved Tuesday from intensive care to a regular room at the hospital. Her guardian and uncle, Talib, who brought her to Karachi, says Adila spoke her first words Tuesday since the surgery. She asked for grapes. Talib says he was overcome by emotion, and kissed her on the cheek. He told Adila that from now on, she'd feel better, but the child is still not well enough to go home to her village in Kunar province, northeast of Kabul. Doctors say Adila still has an infection, and therefore will stay at the hospital in Karachi for follow-up treatment until next month. 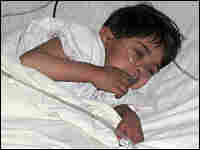 Adila, 6, breathes with the help of an oxygen tube at the French Medical Institute for Children in Kabul. Soraya Sarhaddi Nelson, NPR hide caption 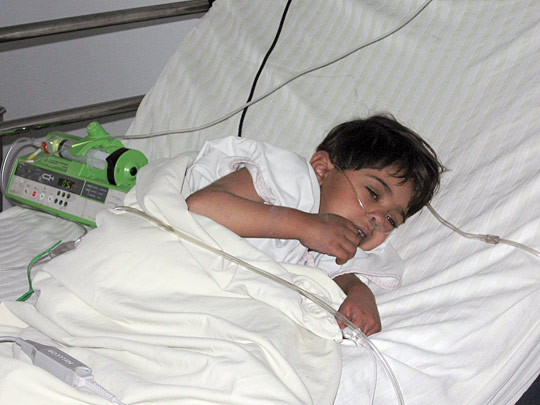 Adila, 6, breathes with the help of an oxygen tube at the French Medical Institute for Children in Kabul.

Much of the work of U.S. troops in Afghanistan involves helping local communities. They build schools and roads — and they host clinics for people living in remote areas who otherwise wouldn't get medical care.

In this case, a 6-year-old Afghan girl's life is at the center of a lapse in communication. And while, after uncertainty over funding, an anonymous donor has offered to cover costs for surgery required to keep her alive, transportation logistics remain unclear as her condition worsens.

Beeping monitors and strangers in an Intensive Care Unit in the French Medical Institute for Children frighten Adila.

A few wails are all she can muster. Her dark eyes close. She falls asleep, exhausted from her outburst. She struggles to breathe, even with an oxygen mask.

Her Pashtun name is a variation of the Arabic word for "just." Yet what is happening to Adila seems anything but just. On this night, doctors try to stabilize her after she shows up for a heart test. Her lips were blue from a lack of oxygen.

Adila suffers from a birth defect called Tetralogy of Fallot. Parts of her heart are malformed and can't get enough oxygen to her tiny body.

Dr. Amena Shaheer, who heads this ICU, says the girl is in bad shape. But there is little they can do for her. Adila needs emergency surgery, immediately, she says.

An American army doctor who reviewed Adila's case, made a similar diagnosis. He wasn't available for an interview.

Relatives and Afghan officials say Adila was taken by her family to Camp Blessing, an American outpost in war-torn Kunar province in northeastern Afghanistan. There, the Army doctor hatched a plan to have Adila evaluated in neighboring Pakistan. If doctors there deemed her a suitable candidate, he would ask a charity called Save a Child's Heart to send Adila to Israel for corrective surgery.

The military told Adila's family that all they needed to do was to get her a passport and make the trip to Kabul. That's no easy task for an impoverished family without documents — and who rarely leave their remote village.

But with Afghan officials' help, Adila got her passport in one day. American soldiers nearby at the Kunar provincial reconstruction team, dug into their pockets for the $70 cab fare.

Last Tuesday, Adila and her guardian set off by taxi for Kabul. And that's when the American plan fell apart.

Adila's guardian, an uncle named Talib, says by the time they got to Kabul, the girl was dehydrated and blue from lack of oxygen. No hospital was aware of Adila's arrival or her case.

The Army doctor who made the plans had left the country. The people he asked to follow her case in his absence failed to do so.

So in a mad scramble, the Kunar PRT told Adila and her uncle to go to the CURE hospital in Kabul, run by a Pennsylvania-based charity group. Eric Sinclair, chief operating officer of the hospital, agreed to admit Adila and stabilize her.

"I applaud the work they are doing on behalf of the community, but in this case, they've dropped the red-hot potato, so to speak," says Sinclair of the military's effort.

"Based on the fact that we've helped so many people in the past, locals often expect that once a problem has been given to us, it'll be taken care of immediately and completely," Sternberg says.

With the help of CURE hospital, Adila was sent across town to the French Medical Institute for Children, where she could get the tests she needs.

The half-hour trip sent the girl crashing again. She wound up in the ICU. Her condition improved and she was moved to a regular room, where she remains. But doctors say Adila is running out of time.

Next Step in the Plan

Officials at the CURE and French hospitals say they've repeatedly asked the Americans what they plan to do. Both charity hospitals say they are in no position to pay for Adila's treatment, let alone the surgery. They say she needs to be flown to Karachi in Pakistan, where the surgery can be done quickly.

Sternberg, the military spokesman, says soldiers reached into their own pockets to pay for her care at the French hospital. Sinclair says he waived his hospital's costs.

"There is a whole logistics nightmare again ahead of us and time is something that is pressing against us so we obviously need to come up with a solution very quickly," Sinclair says.

One of the main obstacles is money for the surgery. The medical officials in Kabul say it should come from the military, which sent Adila here in the first place.

Sternberg says they can't, under their rules, spend military funds on her surgery. But he says the army has located an anonymous donor willing to pay for it.

How Adila will get to Karachi, though, is still unclear.