Accessibility links
Battling the Pentagon Blaze After 9/11 After American Airlines Flight 77 crashed into the Pentagon on September 11, it took firefighters three days to stop the blaze. Firefighter Patrick Creed and journalist Rick Newman discuss the Pentagon blaze and the book they wrote about it, Firefight.

Listen
Battling the Pentagon Blaze After 9/11

After American Airlines Flight 77 crashed into the Pentagon on Sept. 11, 2001, it took firefighters three days to extinguish the flames. Firefighter Patrick Creed and journalist Rick Newman join Fresh Air to talk about the Pentagon blaze and the book they wrote about it, Firefight: Inside the Battle to Save the Pentagon on 9/11.

Firefight tells the stories of the people inside the Pentagon when the plane hit, the rescue efforts that followed the attack and the three-day battle to extinguish the blaze. Firefighters faced unique circumstances, Creed and Newman write, because structural reinforcements built to safeguard the Pentagon against attack — like blast-proof windows and a roof covered by a foot of concrete — hampered their progress.

Creed, a volunteer firefighter, recently returned from Iraq, where he served as a civil-affairs officer with the Army's Special Operations Command.

Newman is a staff-writer for U.S. News and World Report. 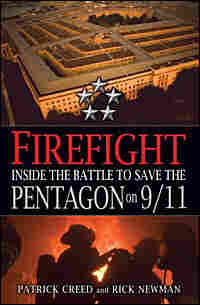 In its last second of flight, American Airlines Flight 77 passed over a Citgo gas station just down the hill from the Navy Annex, a series of building that overlooked the Pentagon. Rooftops rose rapidly to meet the jet. To its left, the orderly white headstones of Arlington National Cemetery stood at attention. As the plane crossed Washington Blvd., which separated the cemetery from the western lawn of the Pentagon reservation, its wings knocked over several light poles that lined the road. One light pole fell onto a taxicab, smashing the windshield, injuring the driver, and bringing the sedan to a skidding halt. Another landed on the Pentagon lawn, in several pieces.

In the small tower on the Pentagon helipad, air traffic controller Sean Boger saw the image of an airplane began to materialize through the window, on the near horizon: first a nose, then a wing, then no doubt about it, a whole goddamn airplane. Boger froze.

At the adjacent fire station, Mark Skipper was standing in front of Foam 161, the helipad's firetruck, smoking a cigarette and talking with Alan Wallace about the news from New York. Wallace noticed some movement out of the corner of his eye. Both men jerked their heads around in sudden disbelief. The plane was flying straight at them from the west, rapidly filling the sky like some kind of surreal 3-D video game. They couldn't hear it, but by the time they saw the plane it was only 150 yards away, a few feet off the ground--and about to fly right through them.

"Run!" Wallace screamed. He bolted to the right, sure that the plane was about to take his head off. Skipper took off in another direction.

The instant its nose struck the outer wall of the Pentagon, Flight 77 ceased to be an airplane. The nose of the plane hit the façade just below the top of the first story, about 14 feet above the ground, going 530 miles per hour. A violent concussion tore through the air, jarring bystanders. When it hit the building, the fuselage crumpled immediately. Its soft aluminum disintegrated as it encountered layers of limestone, brick, concrete, a blast-resistant geotextile lining, the steel-reinforced concrete columns that held up the building, and everything else in its path. In an instant, the impact reduced Flight 77 to a million superheated fragments.

The aircraft was carrying 5,300 gallons of fuel, in three fuel tanks--one in the fuselage, and one in each wing. At the moment of impact, about 720 gallons of fuel ignited outside the building, sending a fireball twice the height of the Pentagon up through the roof and out in every direction. Fire instantly charred grass and trees lining the outer wall. Burning wreckage flew across the lawn. Chunks of metal rained down. A mushroom cloud followed the blast high into the sky.

The remaining 4,700 gallons of fuel exploded in a blast far more powerful than the initial fireball. The massive concussion obliterated what was left of the airplane. Shock waves hurtled down hallways. Fire raced through office space, air vents, and stairwells at nearly the speed of sound. More fuel mingled with the disintegrating fuselage as it plowed forward and became a roaring mass of fluid and debris.

In the building's interior, the remnants of the airplane careened through a forest of support columns. The columns dismantled the fuselage, while the force of the fuselage simultaneously wiped out the columns. The 182,000-pound aircraft was morphing into an enormous mass of energy and matter, plowing forward like a horizontal volcanic eruption. More than 600,000 bolts and rivets that had held the plane together, along with 60 miles of wire, became shards of searing shrapnel that fired off in every direction. Walls collapsed. Ceilings crashed. Doors blew off their hinges. Elevator shafts twisted and bent.

The mass tore through a bank of administrative offices that the Army occupied in the E Ring, the outermost corridor. Then it obliterated the Navy Command Center, which extended from the D Ring to the C Ring. The path of devastation next reached a Defense Intelligence Agency office on the C Ring.

When the airplane had burst on impact, the blast threw many pieces backward onto the lawn by the helipad, some with such force that they landed on the other side of Washington Boulevard, nearly 1,000 feet away. But thousands of pieces also carried forward and upward, even over the roof of the building. In the Pentagon's inner courtyard, tiny pieces of aluminum drifted down like confetti. Other pieces landed on the roof. The body of the hijacker who had been flying the plane ended up in the D Ring, about 100 feet from the impact point. The corpses of his four fellow hijackers landed nearby.

The mass plowed through the C Ring and blew a round hole, about 12 feet in diameter, through the C Ring's inner wall. A pile of fiery wreckage flew through the hole and landed in A&E Drive, the utility road between the B and C Rings. But most of the wreckage piled up behind the C Ring wall. By the time it came to a stop, the mass of debris that had once been Flight 77 had traveled about 310 feet from the impact point, a distance twice the length of the 757. Decelerating from 530 miles per hour to a dead stop in that distance produced a gravitational force of 30 g's, more than three times the force that fighters pilots are trained to withstand in the cockpit. From the moment of impact, the entire event had taken place in eight-tenths of a second.

The crash was over. But an enormous fire had only just begun.

Excerpted from Firefight: Inside the Battle to Save the Pentagon on 9/11, by Patrick Creed and Rick Newman. Copyright (c) 2008. Reprinted with permission from Presidio Press, a division of Random House, Inc. All rights reserved. 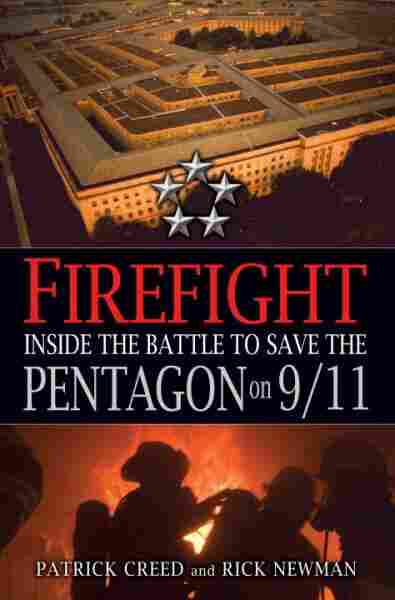 Inside the Battle to Save the Pentagon on 9/11

by Patrick Creed and Rick Newman